Last year I bought my friend Norman the Slug with a Silly Shell by Sue Hendra for her daughter. Little did I know then the pain I would cause my friend because her daughter loved it so much! She literally knows it off by heart! So for this Christmas I decided to carry on the pain by making a wall hanging of Norman.
This is what I bought to make Norman – felt in orange, yellow, and 3 of pink. I also got matching thread for all of this and some beads (for the hundreds and thousands on the doughnut) and some purple cotton fabric for the backing – a metre in total I think (so it could be doubled to hide all the stitching).

First I made Norman from the orange felt, adding eyes made from a bit of wadding I had lying around (but 2 layers to make it not see-through), and with embroidered pupils.

Then I sewing him onto the background…..

….and added on his slime trail. 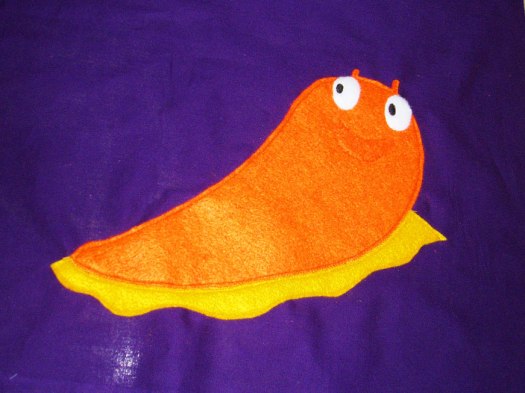 I sewed the bead/ sequins to the pink felt, which I had cut out for the doughnut. I had to make it in 2 halves because of the size of the felt, which is a bit of a shame but didn’t show too badly. 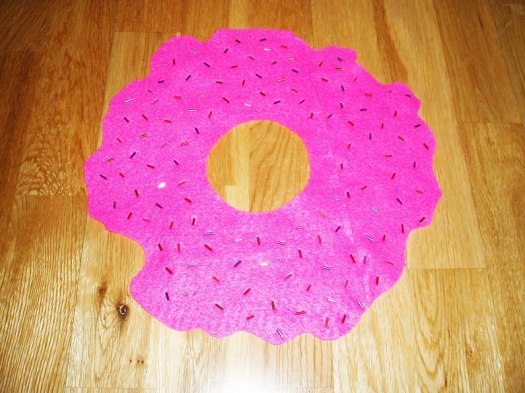 I cut out paper patterns for all the pieces. The doughnut I cut out round, and then cut the pieces out for the irregular icing. I saved the pieces I cut out to make the bread parts of the doughnut for around the edge. I used bondaweb on them as they were so small, so I could stick them to the background and then sew them – pins would have been no good!

I cut the name out of the same pink felt. 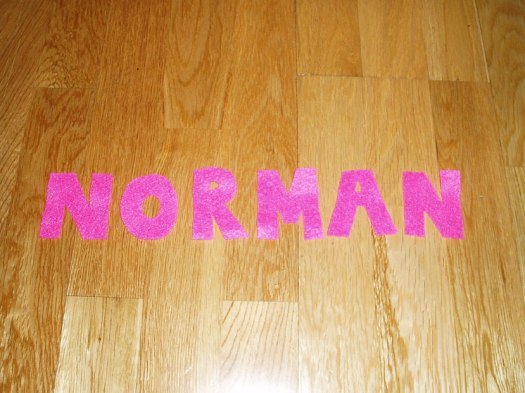 All that was left to do was to sew it all on to the background, which was 40cm x 40cm. 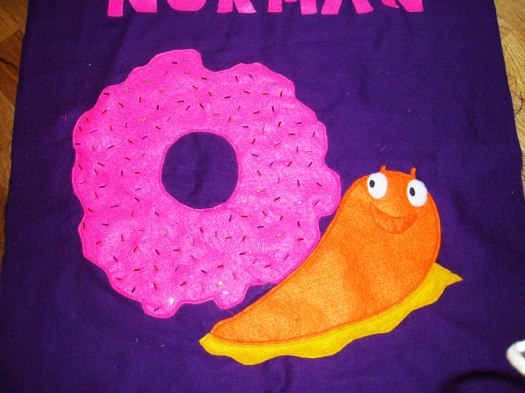 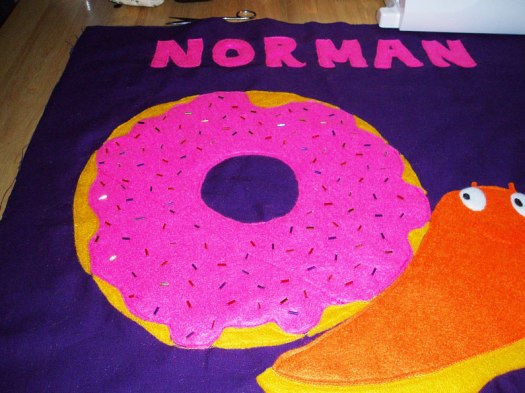 I used a piece of brown wool I had in my stash for the string Norman uses to tie on the doughnut.

The last thing to do was the loops on the top to hang Norman from. I made them 9cm x 21cm. Sewed them in half lengthways, turned them inside out/ the right way round (the fabric doesn’t really have a back and front) and ironed them so that the seams were in the middle not on one edge. I them placed the loops equally spaced (allowing for the seam allowance), folded in half on top of one of the background pieces, with the raw edges of the loop lined up with the raw edge of the backing piece. I then put the other backing piece (with Norman on) on top of this, wrong sides together, with the loops in between the 2 pieces and sewed almost all the way around, leaving a gap to turn it the right way around. I then sewed this little gap closed by hand.

(You can just about make out the pins in the corner where I sewed the opening closed.)

8 Replies to “Make It: Norman the Slug with a Silly Shell Wall Hanging”

Sneaky peek of something I’m super excited to finish and wear! My first time doing bias bound seams-not my neatest work but it’s doing the job! #bomberjacket #boundseams #biasboundseams #isew #sewingblogger #isewclothes
What’s this? Some actual cutting out happening?! I’ve barely seen anything since October but I think my sewjo has finally returned! This is going to be a @ninaleelondon Richmond Blazer and I’m so excited to finish it and wear it! #richmondblazer #sewjoproblems #isew #isewclothes #sewingblogger
I blogged about this Ebony top I made from jersey from @craftysewandso which I bought after The Dressmakers’ Ball yesterday. To sum up: I really like it. It’s difficult to get the colours in the stripes to look like they do irl and you can’t tell there’s a pale blue background at all! Oh well 🤷‍♀️ #ebonytop @closetcase.patterns #closetcasepatterns #dressmakersball #sewingblogger #linkinbio
#bpsewvember day 5: repeat. I thought I’d talk about my most worn me mades (rather than most made pattern) to celebrate the wins! By far my most worn item is my Morgan jeans. I’ve worn them multiple times per week since I finished them. Coming up closely behind are 2 of my coats: my Freemantle and refashioned trench coat. Honourable mention to my Honetone coat, too, though it’s not cold enough to wear it yet this year. @closetcase.patterns #morganjeans #freemantlecoat #honetonecoat #marillawalker @marillawalker #refashion #refashioners #bpsewvember2019 #bpsewvember19