I finally finished my Gertie Bow Tied Blouse, which I blogged about wanting to make frickin’ ages ago! I bought the fabric in one of the cheap fabric shops in Walthamstow. The first time I went there  (when I bought this fabric), I couldn’t believe a lot of the things were under £2 per metre! I only got a couple of things on that trip and one of them was this shiny navy blue teeny polka dot fabric. I didn’t realise it was so shiny as it was rolled with the wrong side out on the roll. I kind of like the shiny-ness though, which is lucky! 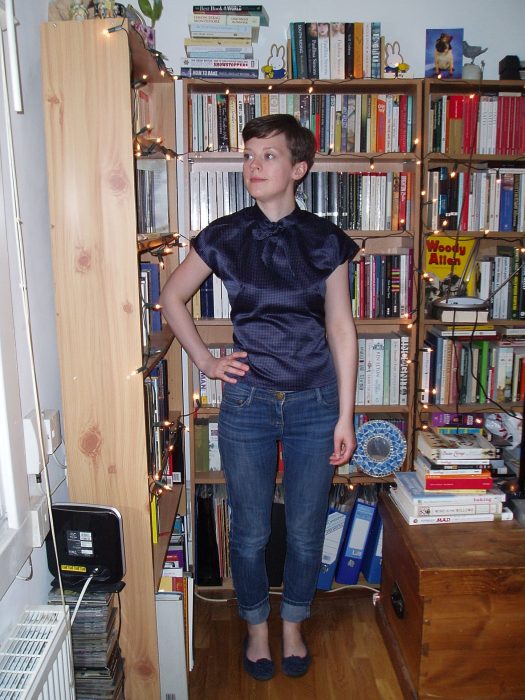 I think like the other bloggers who I’ve seen have made this pattern, I had issues with the neck being waaaay to small for any human! I measured it at one point and it was only 7 inches around – compared to my actual neck, which I’ve just measured, which is 12.5 in! I didn’t make a muslin because this fabric was cheaper than calico, so it seemed a waste of money and time to make one. So I just hacked at the collar once the blouse was mostly together. I can’t now remember how much I cut off, which is annoying because I wanted to make this again. If I make it again, I’ll re-draft the neckline to make it at least 12.5in round! I think I might make the neck tie a little longer too as I feel like the bow is a bit too small.

Apart from the neck causing me problems, the rest of the blouse came together really easily. It is made up of not many pieces, with the sleeves a part of the front and back pieces (so no annoying easing of sleeves into shoulders). The only reason this took me so long to finish is because I got to the point of only needing to hem it and do the button holes and sew on the buttons. But when I’ve done button holes on my machine before, they haven’t been great – mainly I think because I don’t have a buttonhole foot (don’t judge me, I’m going to get one…..one day!). But actually they were okay. I didn’t use the placements from the pattern, I just measured how long the back was and spaced the buttons equally, as I think some people mentioned the bottom button was a bit too high. 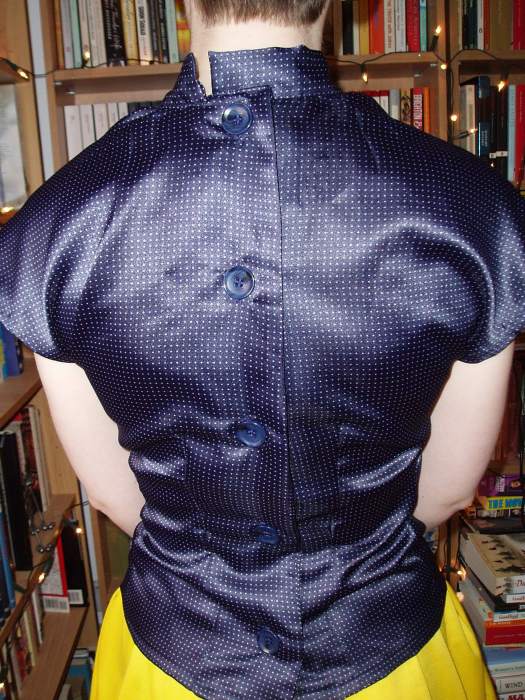 Looking at this photo, I think I need to alter the position of the neck-band if I make it again – when it’s done up, it’s all to one side!

I made a size 8 this time, but I think if I make it again I might cut out the size 10 instead as I think I would prefer the fit with a bit more ease. I think I would also add an extra inch or 2 to the length as although it looks okay with my new yellow skirt (blog post to follow), and with my jeans which have a fairly high waste, I think it might show a bit too much tummy with any bottoms with a lower rise.

(Sorry for the odd expression here – I look stoned!)

Overall, though, I’m pretty pleased with it. And I’ve worn it to work twice and got compliments on it both times, which is awesome, because then you can say ‘what, this thing – oh I made it’ and look at the look of surprise on their faces! definitely more of these to come!

What’s this? I sewed something! And blogged about it! Miracles do happen 😂 This is one of 2 @helens__closet Elliot sweaters I made and it’s safe to say it’s true love! More pics on the blog. Fabric I think was from @material_girl_laura. #elliotsweater #elliottop #sewingblogger #linkinbio #sewingwithknits #isewclothes
It’s looking like a double welt pocket!! Exciting! #ninaleepatterns #richmondblazer #doubleweltpocket #tailoring #imakeclothes #jacket #blazer
Sneaky peek of something I’m super excited to finish and wear! My first time doing bias bound seams-not my neatest work but it’s doing the job! #bomberjacket #boundseams #biasboundseams #isew #sewingblogger #isewclothes
What’s this? Some actual cutting out happening?! I’ve barely seen anything since October but I think my sewjo has finally returned! This is going to be a @ninaleelondon Richmond Blazer and I’m so excited to finish it and wear it! #richmondblazer #sewjoproblems #isew #isewclothes #sewingblogger