I’ve been sewing like a mad thing this week, to get a dress finished for my friend’s wedding, which was yesterday – and I made 2 dresses: a wearable muslin and the actual one, so as soon as I take photos (and properly finish the muslin) I have lots of sewing to show off!

But in the mean time, here is a refashion I did ages ago and have only just got round to posting. I had a vest top with little boats on which I really liked, but it had become too small and too short:

I decided to make it into a t shirt by adding some red fabric as the top half and using the vest as the bottom half. We had an old pillow case lying around so I used a t shirt I had as a template and cut out the top half of a t shirt:

Unfortunately, as this was cotton and not jersey, I couldn’t get it over my head so I scrapped this idea and bought a cheap red t-shirt from Walthamstow market to cut up. Again unfortunately, the way I cut up the vest, meant that the new top was barely longer than before, so I added the bottom of the red t-shirt to the bottom of the new t-shirt. I don’t love it, but I have worn it quite a few times, so I’ve made something I never wore into something I do wear, so a successful refashion I think. (Sorry for the quality of the photos!). 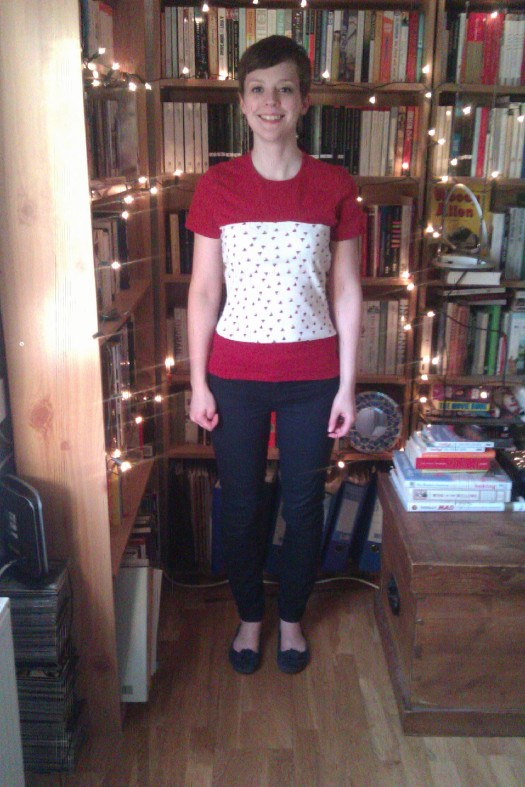 It looks kind of crap from the back, but I don’t know how to fix it – I have a very narrow back, so things always look baggy. 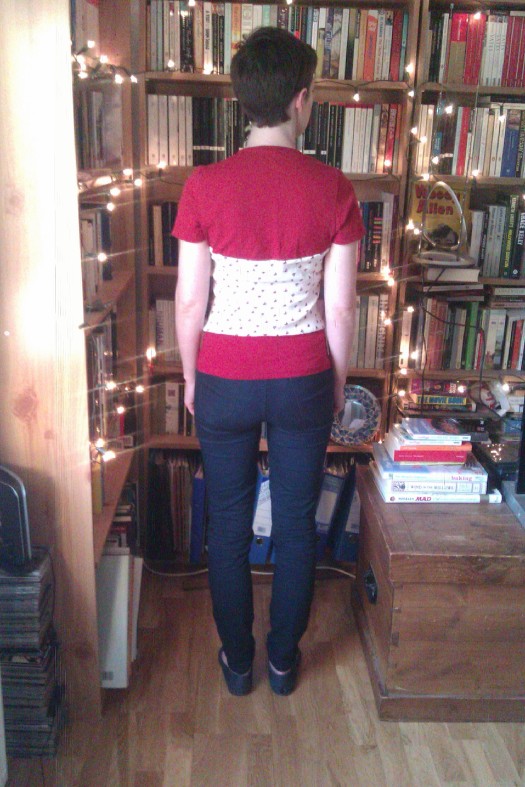 I blogged about this Ebony top I made from jersey from @craftysewandso which I bought after The Dressmakers’ Ball yesterday. To sum up: I really like it. It’s difficult to get the colours in the stripes to look like they do irl and you can’t tell there’s a pale blue background at all! Oh well 🤷‍♀️ #ebonytop @closetcase.patterns #closetcasepatterns #dressmakersball #sewingblogger #linkinbio
#bpsewvember day 5: repeat. I thought I’d talk about my most worn me mades (rather than most made pattern) to celebrate the wins! By far my most worn item is my Morgan jeans. I’ve worn them multiple times per week since I finished them. Coming up closely behind are 2 of my coats: my Freemantle and refashioned trench coat. Honourable mention to my Honetone coat, too, though it’s not cold enough to wear it yet this year. @closetcase.patterns #morganjeans #freemantlecoat #honetonecoat #marillawalker @marillawalker #refashion #refashioners #bpsewvember2019 #bpsewvember19
#bpsewvember day 3: sewing space. I’m very lucky that the one piece of furniture that came with our flat is this massive table (also it folds in half when we want more space). The only problem is it’s quite dark but at least I can leave my stuff out for days and we can still use the other end of the table to eat off-this room is kind of the dining room/hobby room 😊 #bpsewvember2019 #bpsewvember19 #sewingspace #isewclothes #sewingblogger
I blogged about possibly my favourite ever make yesterday-this @closetcase.patterns Kalle Shirt made from @sistermintaka fabric. As soon as I saw the fabric I wanted to make a Hawaiian style shirt, so I straightened the hem and did my best to pattern match across the front. There’s also an invisible pocket 😁 #kalleshirt #hawaiianshirt #shirtmaking #imakeclothes #sewingblogger