OMG you guys, this might be my favourite thing I’ve ever made (how many times have I said this?!)! You know how I like to make presents for kids? Well, for Christmas this year I decided to make my friend’s daughter (who I made Norman and the Travel Match Game for), a fabric allotment, which I saw on A Beautiful Mess. She is now 3 1/2 (and with a brand new, very cute little brother) and this seemed like an age appropriate gift. Also, my friend has been teaching her daughter where food comes from and they’ve grown some things together, so this seemed like a brilliant indoors version of that. Just so you know, this is going to be a really long, picture heavy post! Sorry, not sorry!

This is my ‘before’ picture: a cardboard box (from Oxford University Press to be specific), lots of colours of felt (mostly left over from my Sarah and Duck cushion) and some brown jersey. 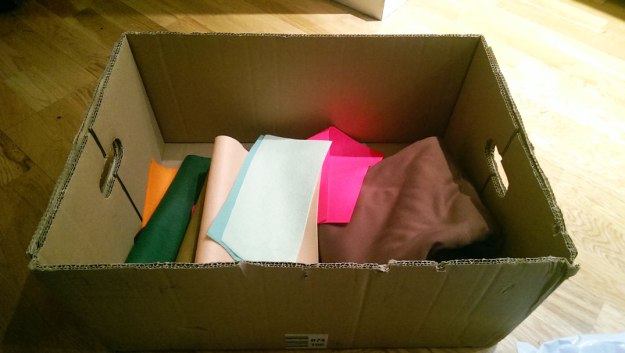 I decided to trim down the box as it seemed a little deep for small arms. My box was 47cm x 34cm x 14cm. A little bit of trial and error – i.e. making one soil ‘sausage’ wrong – told me that the size of my rectangles of jersey had to be 40cm x 42cm. The 40cm was to fill the 34cm width of the book, with some extra length for the seam allowances and the depth needed on the ends. The way I worked out the other measurement was to work out the length divided by 4, as that’s how many soil sausages I was making, (11.75) and make a mark. Then I used my tape measure to make a loop to fill the space up to the mark at 11.75cm, to find out the diameter of the sausage, adding a little more for seam allowance – I hope that makes sense?!

I then sewed the 40cm sides together to make a tube and then ran a loose running stitch around both ends, pulling it tight and tying it off. I did have to sew some extra hand stitches in each end to make sure it stayed closed and was tightly sealed, ready for the stuffing. I used a whole bag of stuffing (from John Lewis) on the soil, so beware that unless your box is a lot smaller than mine, you’ll probably need 2 bags of stuffing.

It looks like that episode of The Simpsons when Homer eats a really sour sweet!

The ABM instructions tell you to paint the box to make it look like soil, but I had loads of jersey left over – I bought a metre and only used a small amount for the soil sausages – so I decided to cover the box with the rest of the jersey as I knew I wouldn’t use it for anything else. 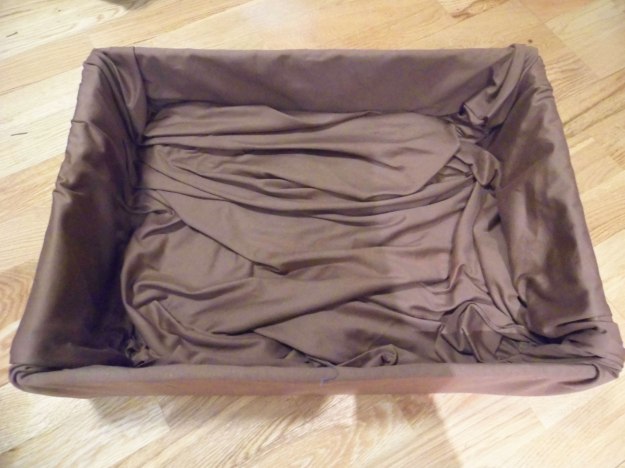 I found I didn’t need to stick the jersey down at all as it just stayed on its own in the middle.

And this is what the garden looks like with all the soil in!

Out of the veg (and fruit) in the ABM version, I made the beetroot and carrots. You can read on their post how they made them – I basically copied them, but with a couple of things I altered, such as the sizing. I also had a think about other root vegetable and decided to make leeks, radishes, onions and potatoes.

I made the beetroot from 5 1/2″ circles as dictated by the size of felt I had. I drew around a mug I had because it happened to be the right size.

I also couldn’t find any pipe cleaners in any of my local shops, as ABM suggest for stiffening the leaves, so I had the brain wave to buy some bendy hair rollers. It’s fairly easy to slip off the little hats on each end of the roller and slide the wire out. They came in 2 lengths, though I used only the long ones in the beetroots.

I copied Katie’s instructions on ABM and stitched the contrast stitching on the leaves and I enclosed the wire in the beetroot coloured felt. I realised my beetroots are a bit rounder than they maybe should be.

HINT: The closer you cut out the triangles into the middle of the circle, the more pointy the shape ends up – if you don’t cut deep enough into the middle, they end up quite round. 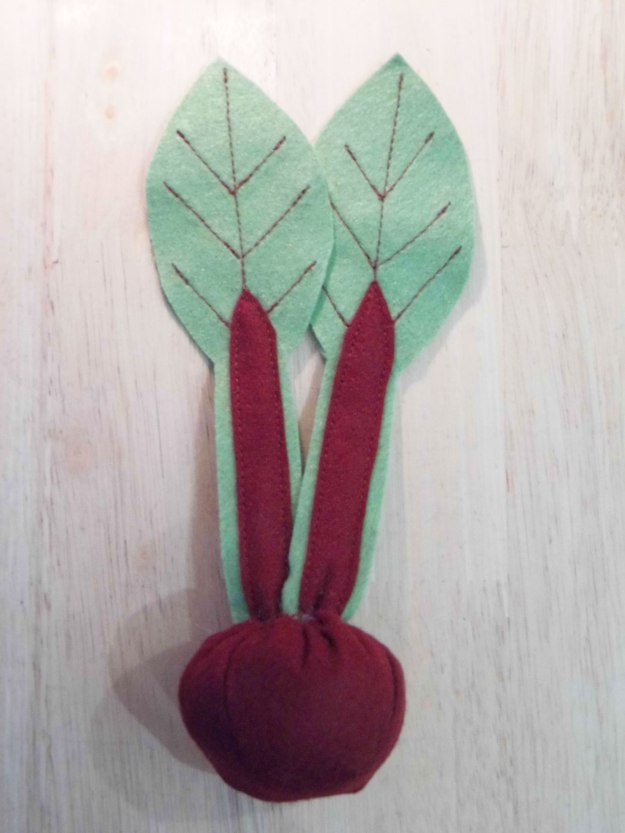 I made 2 beetroots, again dictated by how much felt I had. 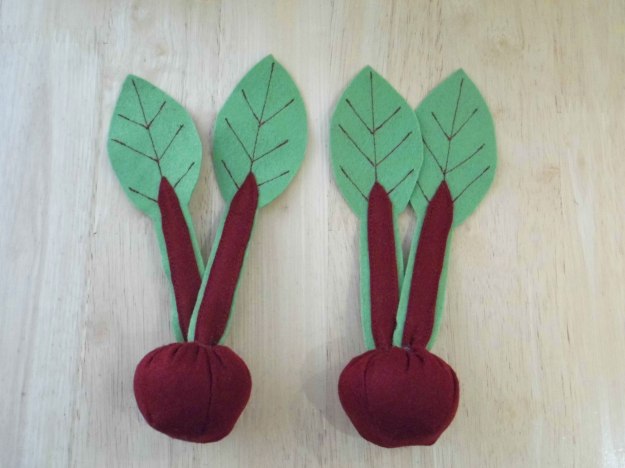 My carrots were 5″ long and 5″ wide at the top of the triangle. I copied ABM for how to make the carrots, so you can have a look there for step-by-step instructions. 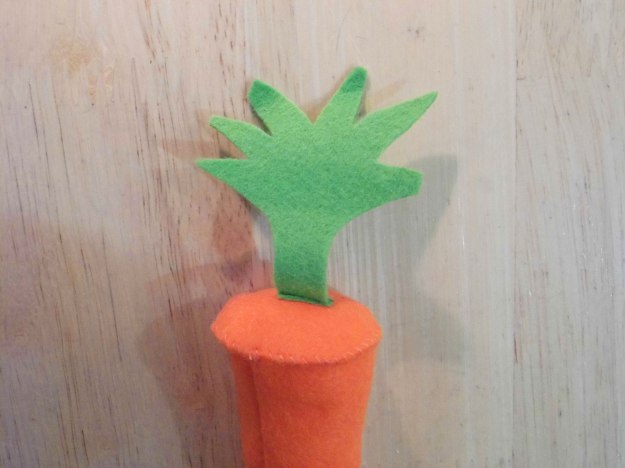 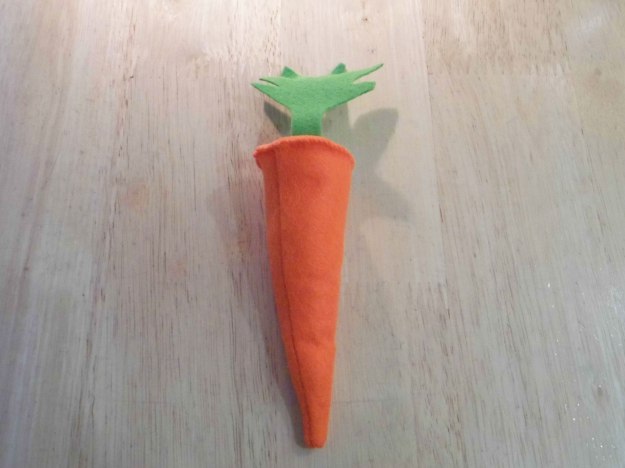 I made 3 carrots in total. 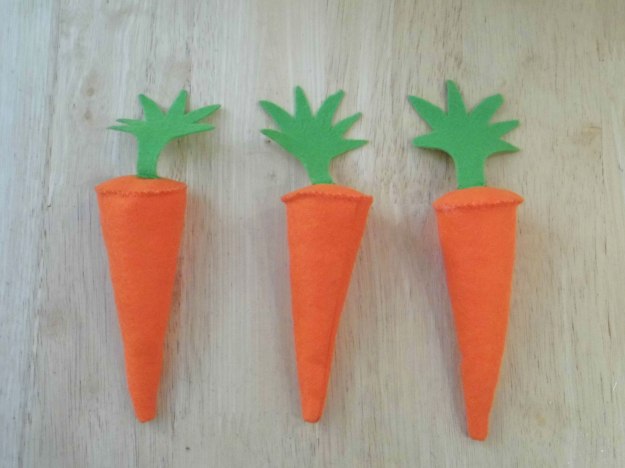 When I made my Sarah and Duck cushion, I ordered a load of felt from ebay, including a pack of lots of different greens as I was planning to put some trees on the cushion (but ran out of time and space!). It was a good job I had so much green, as well as other colours, when it came to making all the veg.

I gathered 3 shades of green which I thought matched a leek – each of the pieces was 5-6cm x 22cm:

Then I sewed the 3 pieces together, then cut it all in half to make 2 leeks, so each leek was 11cm wide: 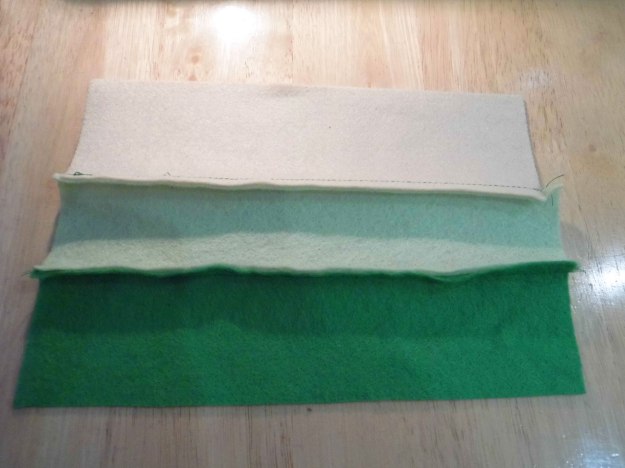 I decided to make the leeks looks like actual leeks, with those layers at the top which are kind of loose and peeling off.

The I sewed them on, continuing the stitching down to the white layer, to show the lines/ veins on the leek:

I then added another layer of rectangles on the top and more stitching. 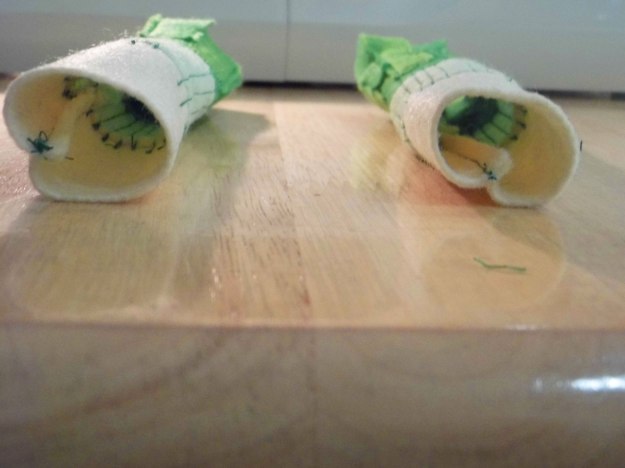 Once they were sewn into tubes, I could measure the diameter of the circles needed for each end – one green for the top and one white for the bottom. I sewed the green end on, underneath the loose layers at the top, so it was a bit fiddley, then stuffed the leek and sewed on the white end, by hand. 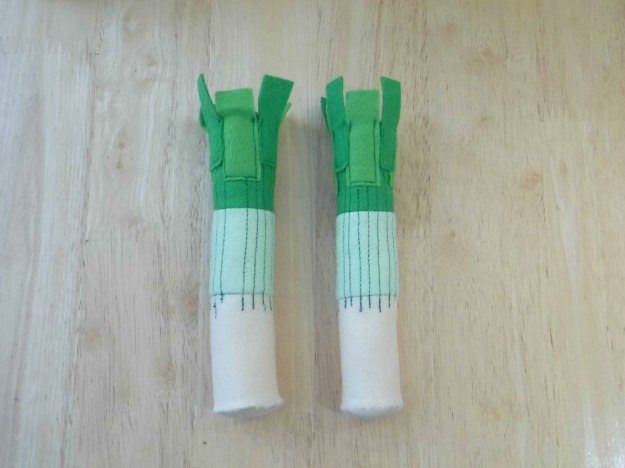 I have to say, the leeks are possibly my favourites.

I felt like potatoes were a necessary addition to any allotment.

I made these in a similar way to the beetroots, but with an oval instead of a circle and I used 2 per potato, kind of like a tailor’s ham. I divided the piece of felt I had into 4, making them 10.5cm x 14.7cm, and rounded off the edges.

I then snipped a triangle out of each corner of each oval:

I got the feeling that these were not going to look super like potatoes, so I got a potato out of our cupboard and noticed that they have all kinds of marks on them. I got out one of my felt tips and tried my best to make a piece of felt look like a potato…… 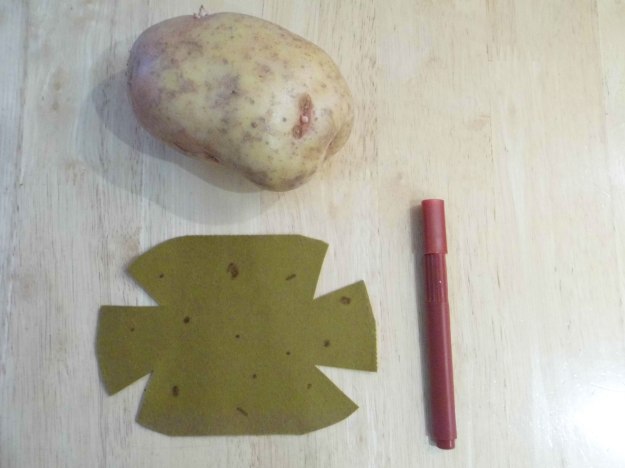 I then sewed each of the little triangles, right sides together:

Then I put two of these halves together, right sides together and sewed them together all around the edge, leaving a gap to turn it the right side out and stuff it through. 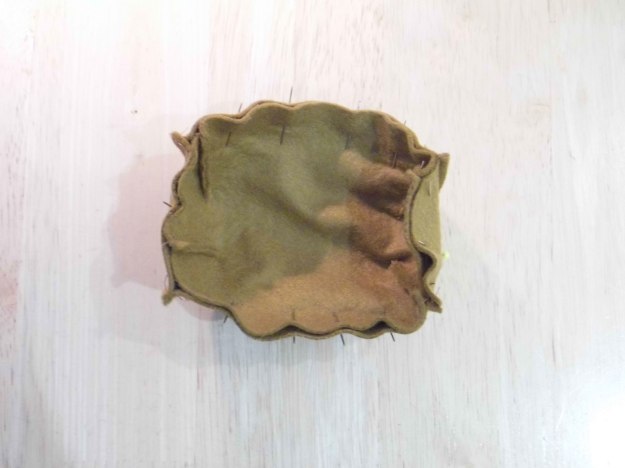 They kind of look like potatoes, when finished – enough that the kid knew they were potatoes, anyway! 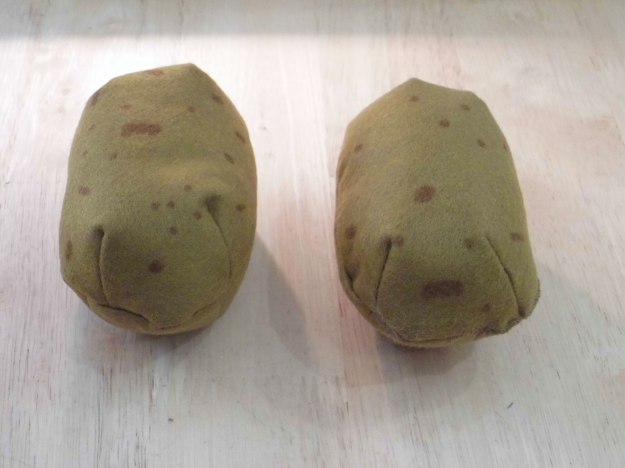 The onions started life like several of the other veg – as circles, this time 14cm in diameter.

I then cut the triangles out in 4 places, cutting quite close to the middle. 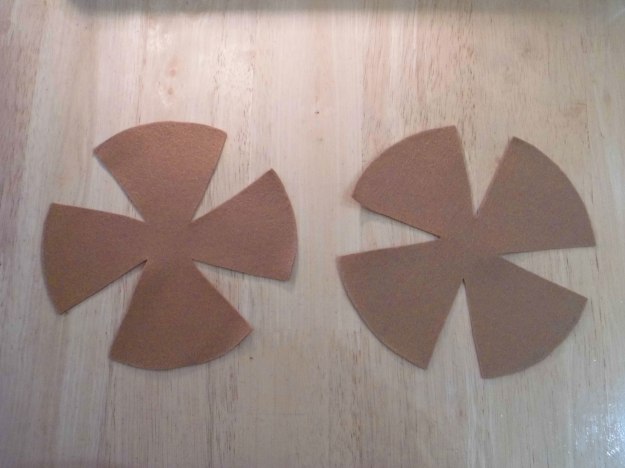 Like on the leek, I sewed lines of stitching to look like the veins/ lines on onions. I sewed several likes into the centre, on each chunk of felt. This took a while!

I then sewed together each triangle, right sides together, and then ran a line of loose running stitches around the top to gather it. I stuffed it, then gathered the stitches, tying it off and sewing a few stitches through the ends to make sure it was really secure. They ended up quite small, but that kind of fits with the relative size of all the vegetables. 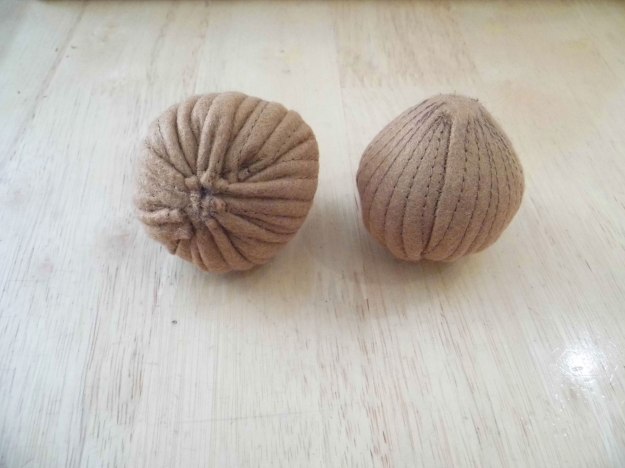 The radishes are pretty much the same as the beetroots, but a little smaller. The circles I cut were 10cm in diameter, with the triangles cut out and then sewn together. 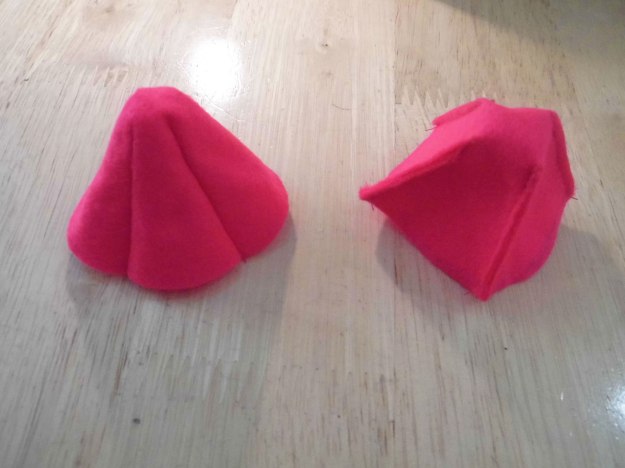 The leaves on a radish look a bit different from the beetroots and are a different shade of green. The stalks also don’t have the coloured part on, so I cut extra strips of green to cover the wire I threaded in to make the stalks stand up. 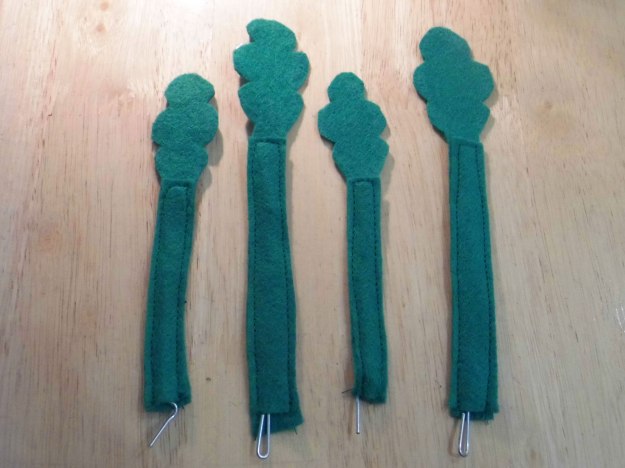 I slotted 2 stalks into each radish and then sewed the top shut, sewing through the stalks to secure them in place. I made 2 radishes in total. 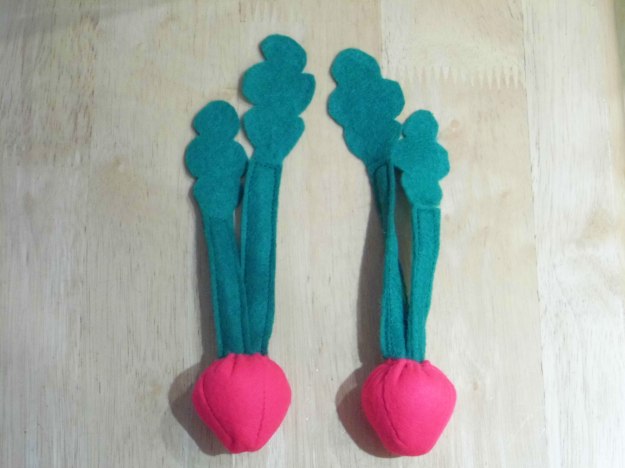 I had plans to make some parsnips and maybe some other root vegetables, but ran out of time and also, you know, forgot.

But the number of things I made was perfect to fill the box.

I made this over about 3 weekends, working on one vegetable at a time. It was quite nice to work on small things that don’t have zips or buttonholes! Also, this was pretty thrifty as I had the felt already and got a box free from my old work, and only had to buy the jersey and the stuffing.

This is probably the present I’ve been most excited to give away! My friends and I always get together in January to have a second Christmas, and this year we all flew to Aberdeen, where my friend with the daughter now lives. I decided to courier the box up as I wouldn’t have been able to take it on the plane and it took more days to arrive than I feared – I thought at one point it had gotten lost. But then it did arrive and I almost opened it myself I was so excited! I definitely like making and giving presents to small people! Do you like making presents for kids? Or for other people?

16 thoughts on “Make It: Felt Allotment”