Since finishing my Freemantle Coat refashion, I haven’t done any sewing. I have thought about sewing a lot – it does occupy quite a lot of my brain! But this leads me to sometimes get a bit overwhelmed. I would like, one day, to have an entirely homemade wardrobe, but there are so many things missing currently that I often feel like I want to make about 20-30 things simultaneously. Then I don’t start anything, because I don’t know what to make first. Do you ever feel like this? 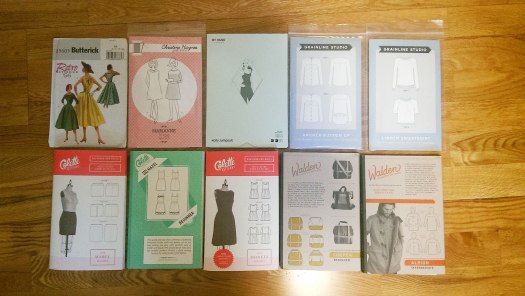 If you follow me on instagram, you’ll have already seen the above photo. These are all the patterns I have bought, intending to make soon after buying them but then they go into my stash and I have yet to make any of them. And then I bought the 2 Grainline ones yesterday. I also went through my stash recently and counted 33 different lengths of fabric that I have – some of which were bought with specific projects in mind, but now they’ve been there so long I’ve either forgotten or changed my mind.

I’ve recently been feeling rather dissatisfied and overwhelmed by the state of our flat, which hasn’t helped my general mood or ability to make decisions on what to sew next. Living in London, the flat that we can afford is very small – 2 rooms and a tiny bathroom (the kitchen is one wall of the sitting room). Unfortunately we’ve been here 3 years now and both of us (The Boyfriend and I) buy books and dvds fairly often, so the amount of stuff we have is growing so the space feels like it’s shrinking! Also, when we moved in, I didn’t sew, so I don’t really have anywhere to store my growing stash of patterns and fabric (and wool) so it just feels like it’s in the way. I’m hoping we’ll move soon (possibly away from London), but in the mean time I decided to sort out my wardrobe and drawers in an effort to not feel quite so overwhelmed – especially when I want to make new clothes all the time!

My clothes did start off tidy, but they had become a bit of a mess! These are the before pictures (sorry for the blurriness!): 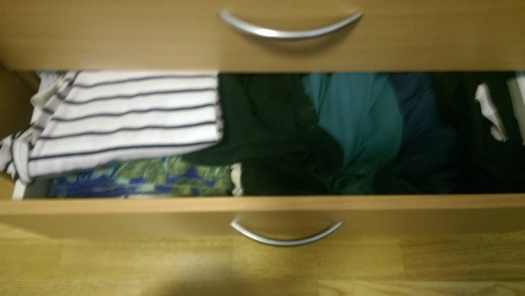 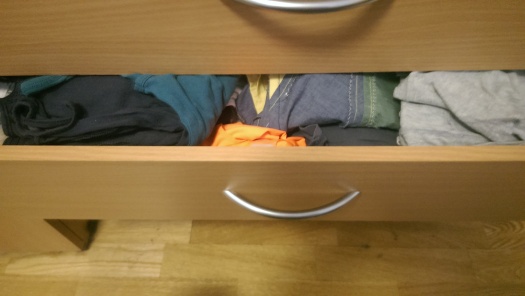 My drawers were so full, they pulled the ones above them open! 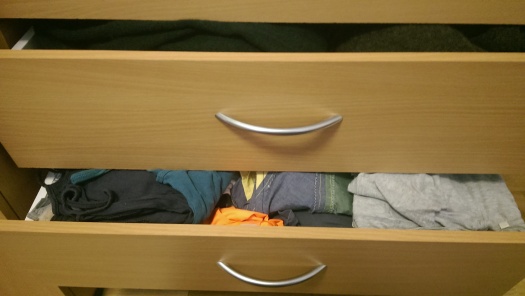 And this is the inside of my wardrobe, which has one cupboard with shelves in where I keep my knitwear and hats and scarves.

You can see all my pashmina-type scarves on the coat hanger on the right, below. 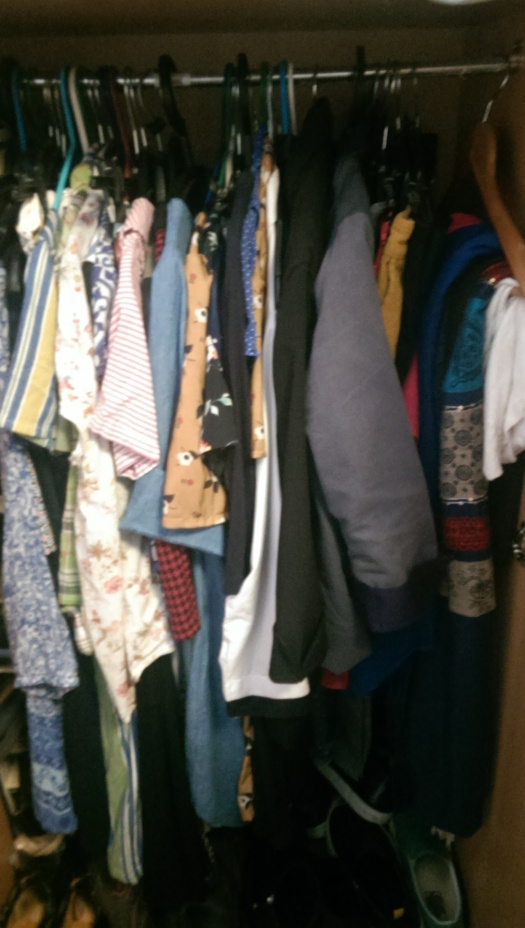 One of the things that precipitated me having a clear out was the fact that my friend had done the same and brought me some of the clothes she was getting rid of, in case I could wear any of them or refashion them if they weren’t wearable as they were.

I’m assuming by now you’ve heard of the Konmari method, which came over from Japan this year due to the book, The Life-Changing Magic of Tidying Up by Marie Kondo, being translated for the first time? I’d seen this YouTube video and read some posts about how good the method is. I keep meaning to buy the book, especially as I’m in a ruthless mood at the moment! I figured I could make my wardrobe and drawers neater.

These are the after pictures – ta da!

These are all my vest tops and t-shirts with short sleeves – it’s so much easier to see what’s in there, and it doesn’t take that long to put things away like this now it’s all sorted.

My jumpers, cardigans and scarves and stuff haven’t really changed that much, just been tidied again. I try to keep jumpers on the left and cardis on the right so things are easier to find.

This is now the shelf above my wardrobe – getting rid of the pajamas from here meant there was room for all my pashminas, creating more space in the hanging part of my wardrobe.

This doesn’t look that different, but there is a bit more space to get things in and out.

I have a box which I keep current projects in, but I don’t have any at the moment – I’m between things, since finishing my coat. So I used that box for all the future refashions: 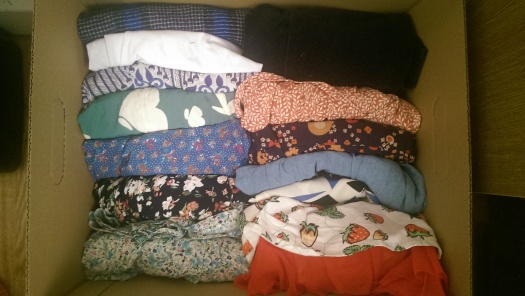 And this is the pile of things I took to the charity shop this morning!

I think I’m going to try to do a one in-one out system when I make new clothes, as I don’t need even as many clothes as I have, let alone more clothes! Slightly in my defense, I’ve had some of them for years and years, and when I have a clear out (I’d had one only a couple of months ago) I do take things to the charity shop so they get another life with someone else.

Today I’ve started an online catalogue of all my sewing patterns and fabric, which will hopefully make me even more able to make decisions about what to make next. Do you ever go through phases where you can’t make decisions? Do you also tidy/ sort things out/ move furniture around when you feel like that?

7 Replies to “Do you ever feel like you don’t know where to start?”