So a lot of things have happened since my last life update. The boyfriend and I moved into our flat, which didn’t go as smoothly as we hoped but we’re pretty settled in now – well we should be, we’ve been in for almost a month now. I’ll probably post some photos, particularly of my sewing space in the near future. I haven’t done any sewing (or blogging) since we moved for one major reason.

This is me (on the right, obvs) and my twin sister Phoebe walking a marathon for a charity that supports the rare degenerative brain disease our dad has 2 years ago – I’m not sure if I’ve mentioned before that my sister who has 2 children who I’ve made various things for is my twin sister. We’re non-identical, but people say we look really really similar.

On August 19th Phoebe went to her doctor as her leg had swelled up, and she had been suffering from thrombophlebitis (an inflammation of veins due to small clots) for a couple of weeks. The doctor sent her to hospital, where she was admitted overnight so she could have a scan to see if she now had a deep vein thrombosis (DVT) which is more serious, but usually easily treated with blood thinners. She was discharged with warfarin with everyone thinking that would resolve the problem.

However on the following Tuesday (23rd) she went along for her follow up appointment with a very very swollen leg which had also gone purple. Peterborough hospital rushed her by blue lights to Addenbrookes for some a procedure to her veins to try to restore circulation. It turned out there were lots of clots in her whole lower leg, in both the veins and the arteries. She had several procedures to fix the veins and the arteries but unfortunately the circulation had been cut off for too long and the doctors made the decision to amputate her left leg above the knee on August 25th – it was hoped that they could save her knee but the damage to her blood vessels was too extensive.

Phoebe took the news about as well as you could expect someone to take having their leg amputated – she understood that it was a choice between her leg and her life and it was actually an easy decision meaning she would be there for her 2 adorable children. (This photo is from last year, Alice is now walking around and everything! And Teddy is even bigger!). 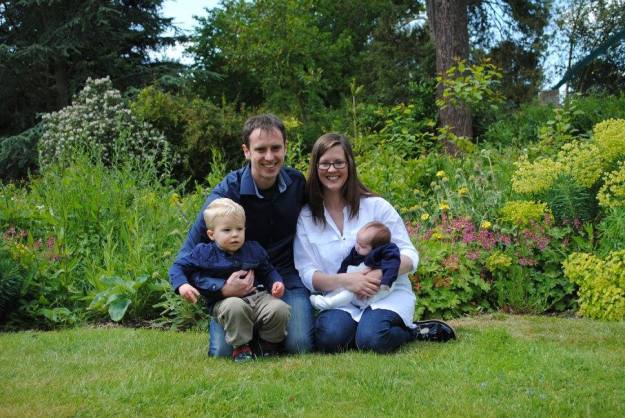 We all thought that the worst was over – how much worse can losing a leg be?! But on Tuesday (the 30th) they discovered 2 more clots – one in her right arm and one in her right leg. Just to jump ahead, she didn’t have to have any other amputations (but obviously she and we were terrified that that might happen), but the doctors are being super vigilant and doing everything they can to minimise her discomfort and figure out what the hell is going on! She is as anti-coagulated as it is possible to be so there shouldn’t be any more clots. The doctors do have some theories so they’re doing their best to narrow it down to one so they can make sure Phoebe doesn’t get any more clots and then can focus on her physiotherapy and working towards being discharged from hospital.

I’ve been to see her twice – this is the first time I’ve regretted the move to Gloucestershire as I’m now really far away from Lincolnshire where she lives and Cambridge where Addenbrookes is – last Sunday and Tuesday. And The Boyfriend and I looked after Teddy and Alice on Monday so Phoebe’s husband, Sam, could go and visit for a good long time. I now have a new appreciation for parents – fuck me is it tiring to look after a 3-year-old and a 17-month old! But it was nice to spend some quality time with them – we haven’t managed to visit much since the move in March as we didn’t really have the money to go back and forth much.

This is Phoebe and Sam.

They got married in October 2011 – and Phoebe made her wedding dress and my bridesmaid dress!

Phoebe really has been amazingly positive so far and we all hope that in time she will be living her life pretty much as she was before the amputation. We all have hopes of her being a star paralympian – she said she’s going to watch the games to decide which sport to take up!

Although I have obviously been very worried for Phoebe at various times over the last 2 weeks, having something like this happen in your family really makes you realise what’s important and what isn’t. It has made me make more of an effort to talk to the people I care for, whether online, over the phone or in person. And it also makes you realise life is short and you never know what might be around the corner – one week Phoebe was fine and we were arranging to go and visit over the bank holiday weekend and by the time we got on the train she had had her leg amputated! I know I don’t usually write so much about personal things on here, but this was too major a thing for me to not acknowledge it to the amazing online sewing community.

I know this is perhaps a little cheeky but I have set up a Just Giving page to raise some money for Phoebe and Sam for any expenses that might arise from her stay in hospital and anything they might need when she is discharged – there will be extra petrol for driving back and forth to hospital, there may be childcare costs down the line, they may need to pay for some adaptations to their house to make things easier for Phoebe. There may be things none of us has yet thought of. I just want them to not have money worries on top of everything else! If anyone out there who may read this would like to contribute anything they can, they will have my undying thanks!

I’m planning to make Phoebe some Carolyn pajamas so she’ll be the most well-dressed person on her ward so hopefully normal service of sewing and blogging will resume shortly.

I hope everyone out there is well and happy and has been making some fabulous things!

One of the causes the doctors mentioned early on as being something that can cause the kind of clotting that led to Phoebe losing her leg was cancer. When we first visited the weekend after the amputation Phoebe mentioned that they thought the doctors had ruled this out. Unfortunately this was not the case and after scanning every inch of her body, they discovered a small tumour in her left lung. They then did some investigating of some swollen lymph nodes – which could have been due to all of the clotting and anticoagulation and everything her body had been through. Even more unfortunately, though, they discovered that the cancer had spread to 3 lymph nodes attached to her trachea. This means that sadly Phoebe’s cancer is not curable, which is obviously a huge blow for all of us but especially for Phoebe. Last week she was started on an oral anticoagulant (instead of the intro-veinous one she had been on before) and then a couple of days later they started her on her chemotherapy tablets – yeah, chemotherapy can now be a tablet! This should stop the cancer spreading and getting worse – fingers crossed! In good news, she should hopefully be going home in the next week or so.

I wanted to say thank you to anyone who left me a lovely message on this post or on Instagram. People always say the online sewing community is the best and it really is true! xx

20 thoughts on “Sometimes life kicks you in the balls”