I’ve made a thing!

And I really like it, though it may not be totally seasonally appropriate as the fabric is quite thick. It’s some mystery black textured something which I got at the fabric swap at the first Sew Brizzle meet up. It was quite thin so I underlined the back and the front skirt with some fairly cheap black polycotton and it seems to have done the trick – judging by these photos which were taken in bright sun anyway!

The pattern is the dress version of Marilla Walker’s Roberts Collection. I bought this ages ago, but only printed and assembled the PDF a few months ago. I printed the whole lot in one go, and it took AGES to put together, but I’m glad because now I’m tempted to make the dungaree version for the colder weather later in the year. I particularly like the back! I love how the straps look and the shape of the back.

This is the side view – and I’m pleased it doesn’t sit too low as I was mildly concerned even with a top underneath, it wouldn’t be decent! But there’s a little band on this side and 3 poppers to get a snugger fit and allow you to get in and out of it!

I made the straight size 2 without making any changes. But looking at it on, I think next time I could shorten the bib on the front and the back above the waist as the ‘waist’ seam sits just a bit lower than my waist, so I think it might be a little more flattering if the seam was on my actual waist.

I used poppers to attach the straps on the front – as I think the pattern says you should – but then sewed some buttons on the top as fakes! I thought about actually using buttons, but since my machine doesn’t like sewing button holes at the best of time, and because this fabric is textured and quite thick, I thought they just wouldn’t work so I went with poppers and fake buttons! 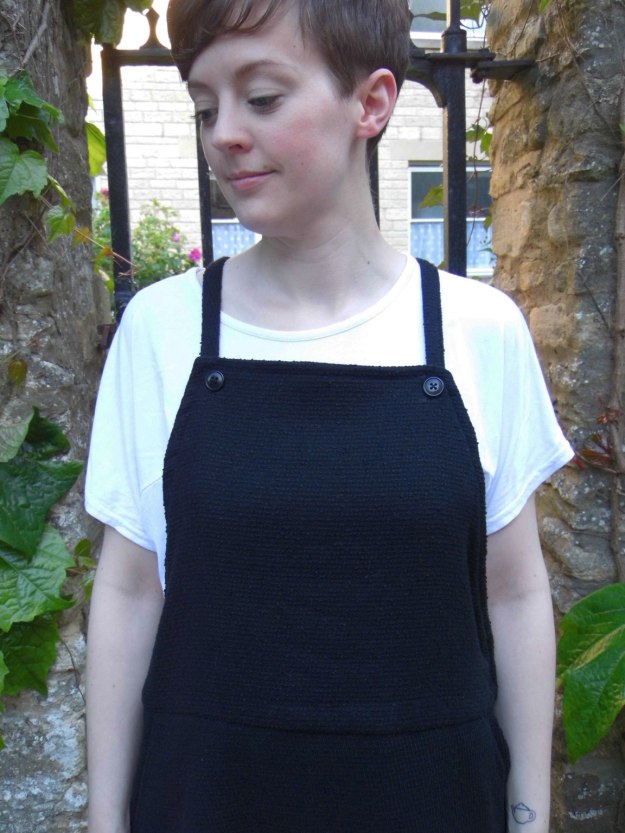 And it has pockets! Yay! I don’t think I’ll ever make anything without pockets in the future, it’s just so annoying to not have any!

I guess there isn’t too much to say about this make because the pattern came together really nicely and I think it will get quite a bit of wear in the warmish weather and with tights and a jumper underneath in the Winter. It will definitely fill in a casual gap in my wardrobe!

So I’ll leave you with an outtake to demonstrate how much I had to edit the photos because I’m too pale for the Sun! My top is cream and really isn’t the same colour as my skin, but it looks like it here! Lol!