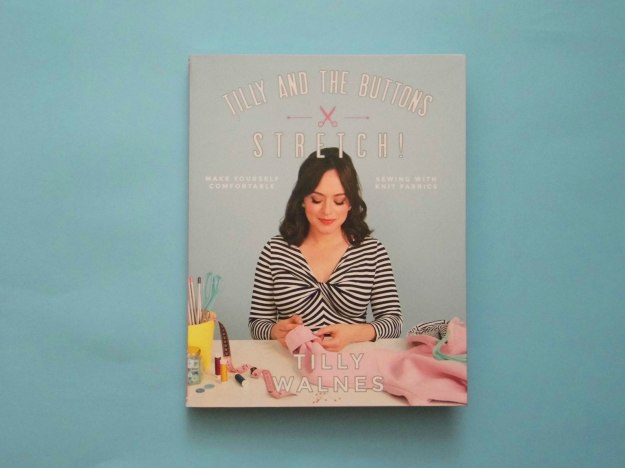 Unless you’ve been living under a rock, I’m pretty sure you will have seen that Tilly from Tilly and the Buttons released her second book in March. Stretch: Make Yourself Comfortable Sewing With Knit Fabrics is the perfect book for anyone who has mastered sewing with wovens, expertly demonstrated in her first book, Love At First Stitch. I still have some projects from the first book I want to make (mainly the Megan dress) and now I’ve got a whole bunch of great knit patterns to add to my ever-growing to-sew list!

As is her main goal, this book takes you through everything you need to know and have to be able to sew great knit garments if you’re a complete knits noob. (And the projects are great if you’ve mastered knit basics). I like how in the below list of items you need she has separated items into ‘need’ and ‘nice to have’ – sometimes it’s easy to be put off starting something new by thinking you have to have ALL THE THINGS but she shows this isn’t the case.

A book on sewing with knits wouldn’t be complete without some tips on matching stripes! Breton tops of my dreams here I come….

Having said all of that, there are also some tips on how to use an overlocker if you do have one. 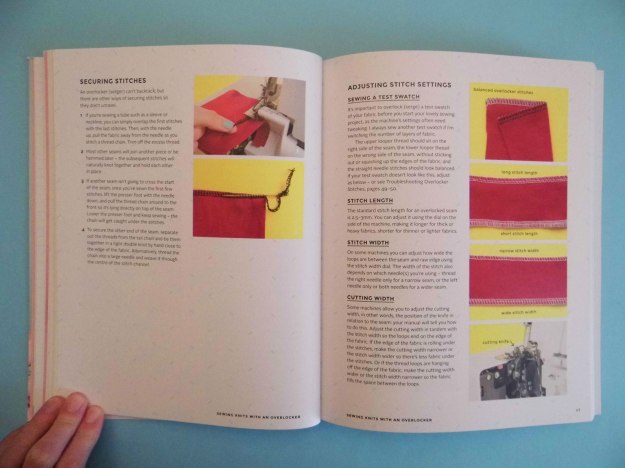 And there are some troubleshooting tips, which I definitely need to have a look through to try to sort out my tension issues. I love that she has clear photos of what the issue might be and then an explanation of how to fix it. 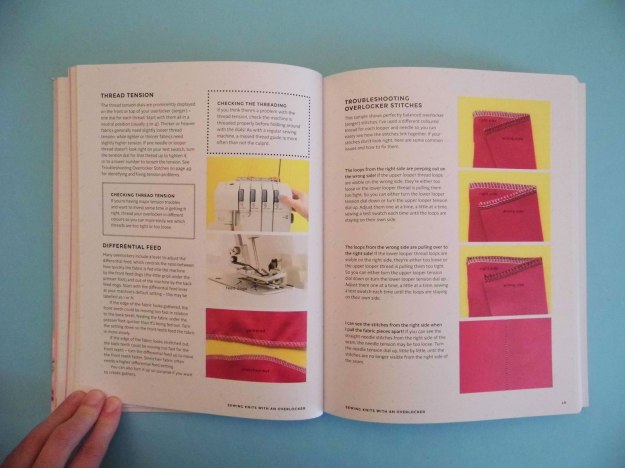 Now onto the projects. As with Love At First Stitch, the projects go from simplest through to most complicated, which is a great way to structure the book as you can get used to working with knits using a more stable knit, as is required for the Bibi skirt. To be totally honest I probably won’t use this pattern as it’s pretty similar to the Colette Mabel, which I’ve already made and traced.

I love that she shows you ways to alter the patterns to make them more easy to adapt to your own style. I like the Bibi with the split and waist tabs. 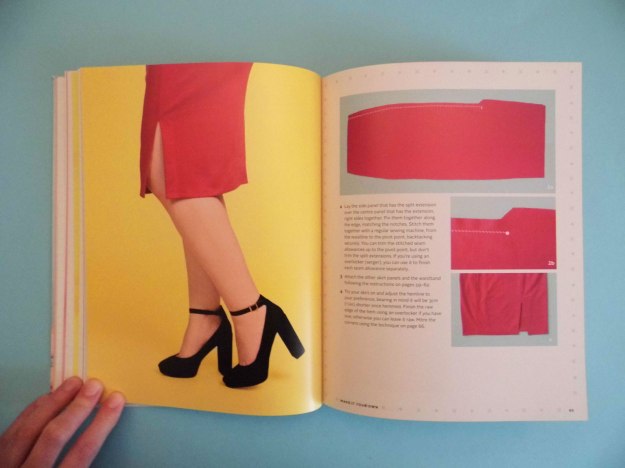 It seems like this adaptation has already been pretty popular online – the season of the pinafore dress has obviously not come to an end yet. I’m pretty behind on the trend, though, and am only just now planning my first Cleo. 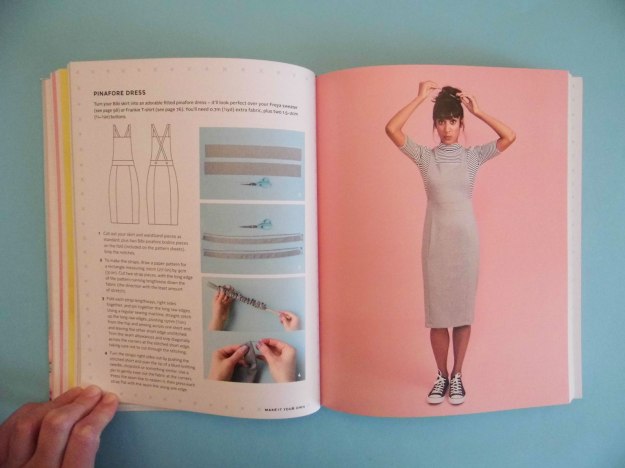 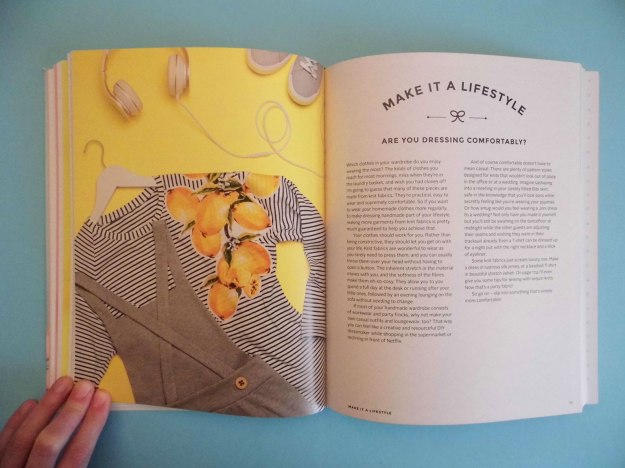 I think this will be one pattern I will use. I wasn’t sure about raglan sleeves on me, but then I realised two of my favourite dresses have them (1, 2) and I made another version of the Linden sweatshirt  and I don’t hate it, so I’m going to give the Frankie baseball tee a go. I have a couple of small but lovely amounts of knit fabrics, which would be perfect for colour blocking – I just need some ideally white jersey to go with them. Any ideas where to get nice white jersey?

I love this version in stripes – who doesn’t love stripes – and it’s a really great idea to add some applique. It’s a fairly simple way to make something more interesting and add some flair. 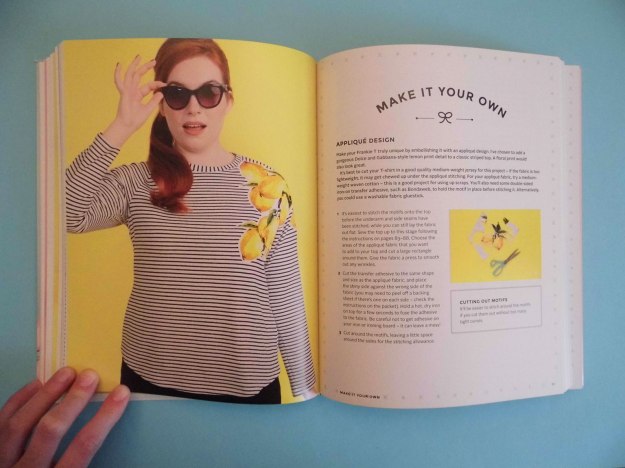 I really like this version with the v-shape in the neckline, too. And the short sleeves are super cute.

The Freya is another pattern I definitely think I’m going to make – probably the top version as I already have loads of dresses I don’t wear very often. 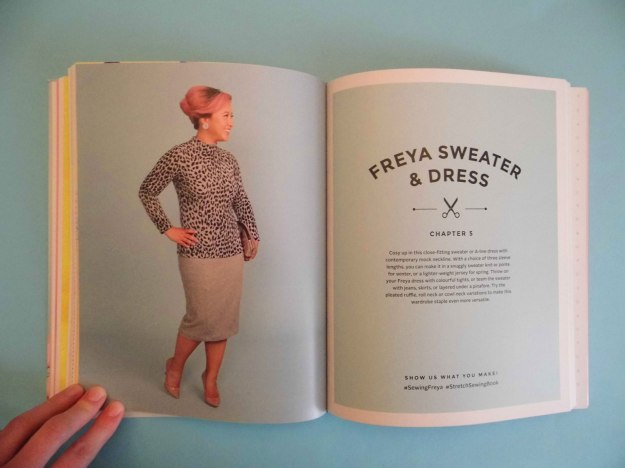 I can see why this mustard yellow dress version had everyone obsessed on Instagram. Zeena Shah looks adorable in the photos and the frill has made me want to try frills for the first time!

There are 3 different necklines to choose from with the Freya pattern and I like the roll neck, especially since it seems like we are never going to get Spring again in the UK – I’m still in the mood to make snuggly, warm makes!

The last pattern in the book I think I’ll try is the Stella joggers (though probably not the hoodie as they aren’t really my style). I feel as though I’m missing some comfortable-lounging-around-the-house clothes so the Stella joggers could be the perfect solution. Also I think without the ankle cuff they wouldn’t look quite so sporty so might be good casual trousers to add to my wardrobe.

The final pattern in the book is the Joni dress, which again I probably won’t make. It’s not really my style, though never say never! 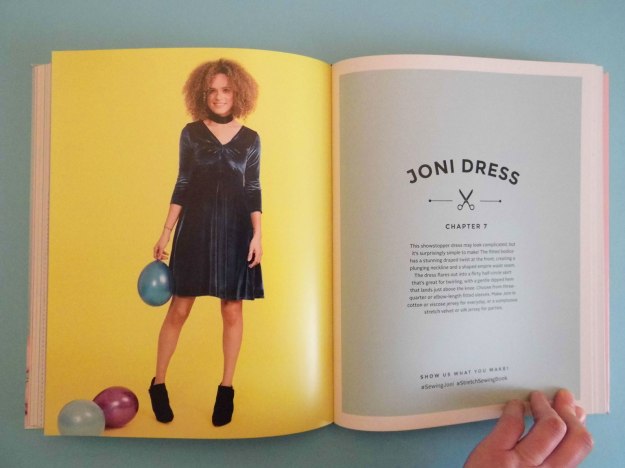 And I do love this version with the sequined skirt, modelled by the gorgeous Alex from Sew Happy. The blush pink is perfect on her and I basically want her hair (though that would take years of growing it out and lots of dye!).

Now I just need to buy a bunch of great knit fabrics to make my comfy wardrobe of my dreams. What are your favourite places to buy knit fabrics? Which pattern from the book are you planning to make first?