This has to be one of the longest-waiting makes ever. Luckily I keep a (not very comprehensive) list of when I cut things out (and when I’ve finished it, photographed it etc) and according to that list, I cut out this Sallie Jumpsuit in June 2017! I clearly slightly lost enthusiasm for it, though I don’t totally hate it now it’s finished.

I made the size 4 and due to the amount of fabric I had to slightly crop the legs – if I’d have had enough fabric, I would have made them longer for sure. 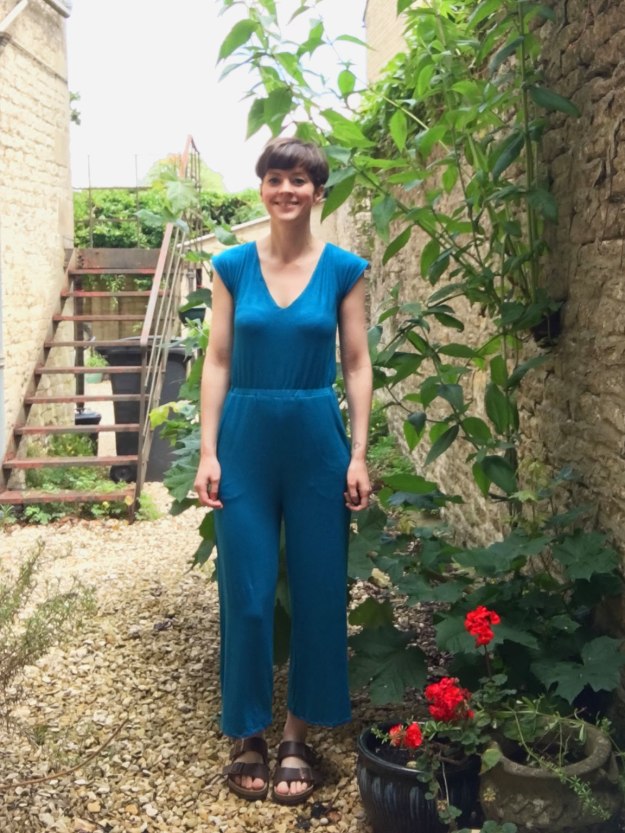 The fabric was a £4.99 remnant from Rolls and Rems, which I bought way before I moved away from London almost 5 years ago! I think for my taste, the fabric is a bit too slinky for me to really love this jumpsuit. It’s also quite thin and I made it towards the end of Summer, so I haven’t had a chance to wear it yet. I think I’ll keep it in my wardrobe until next Summer to see if it’s a nice thing to wear on the, like, 4 really hot days we have here in the UK.

I suspect what will happen is it will sit in my wardrobe, I won’t wear it and then I’ll give it away. Funny considering how long I had the fabric, and how long the thing was cut out before I sewed it together. Though maybe it’s not a surprise I don’t love it as I clearly put off the whole make for aaaages! 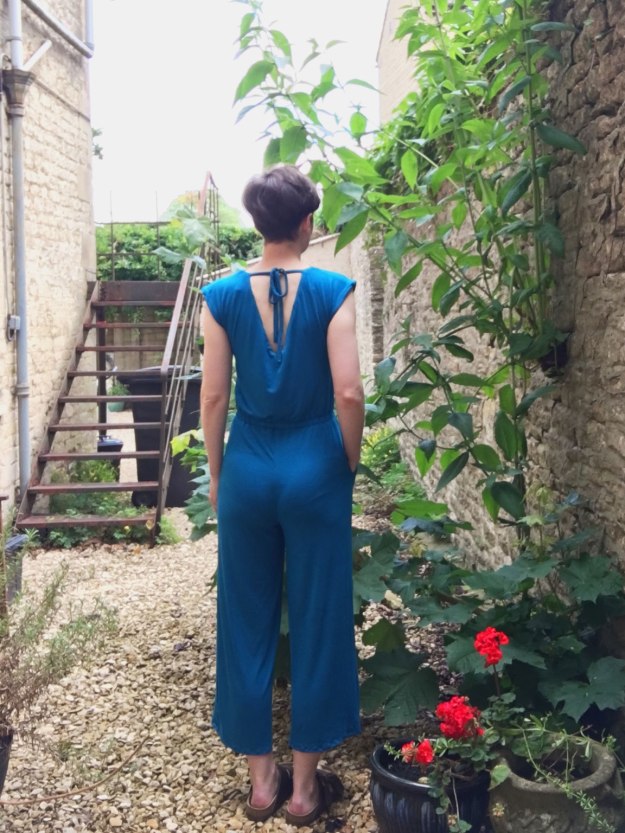 I bought the fabric when I hadn’t been sewing for a super long time – and definitely when I hadn’t sewn much with jersey. I did have a tendency to buy lots of remnants from Rolls and Rems (which I think isn’t there any more) just because they were a decent length and they were cheap. But really cheap fabric is not necessarily made from a fibre you actually want to use!

I do really like the top half of the jumpsuit though, especially the back. I slightly wish I’d used this bodice view on my Sallie dress instead of the version that ties on the shoulders. I have also only worn the dress version a couple of times.

I’m sure lots of sewists have gone through the same thing, but it’s interesting how my style has changed through the years I’ve been making my own clothes. I’m sure part of that is feeling like ‘I’m not ready yet’ to, for example, make jeans and also the general shift which seems to have happened away from more vintage styles and lots of dresses to more stylish basics, like jeans, boxy tops, looser fitting trousers and shift dresses. Obviously some people are still into sewing vintage styles – but while I still love the look of so many vintage garments, I’m not drawn to wearing them in the same way! I think this jumpsuit maybe fits into an earlier iteration of my style – but maybe I wouldn’t have realised that if I’d have never actually sewn it up.

Have you been through a style evolution as a result of learning to sew? Before I sewed I felt restricted by what was pretty cheap in H&M or Primark and so I didn’t especially think about what I might actually like to wear – but with sewing, and being a straight size – I could actually think about what I wanted to wear and make those things, like shirts!