I thought I would share a few snaps of my Dressmakers’ Ball dress – because I want to keep the grand unveiling until the night. And also because I haven’t finished it yet!

I haven’t hemmed it yet:

I’m using the leftover fabric from when I made my By Hand London Alix Dress, because I ended up with quite a lot left after ordering almost twice as much as I needed so I’d have enough to underline the whole dress. I still love the colour, but I don’t like how it frays and creases like a bitch – I did iron it before taking these photos, but you wouldn’t know!

Because of the fraying – and to give it a ball gown-y feel – I’ve used french seams. You may be able to make out 2 lines of stitching, though. I trimmed the seam allowances down to what I thought was teeny tiny, but then I sewed the second part of the french seam and the fabric edge was sticking out on the right side. I trimmed it down as much as possible, but you could still see the edge on the right side, so I sewed another line of stitching with a slightly bigger seam allowance. This slightly ruins the couture effect I was going for, but I didn’t really want to unpick the original line of stitching because this fabric does not like being unpicked!

My dress has sleeves! (And darts, which you can just about make out) 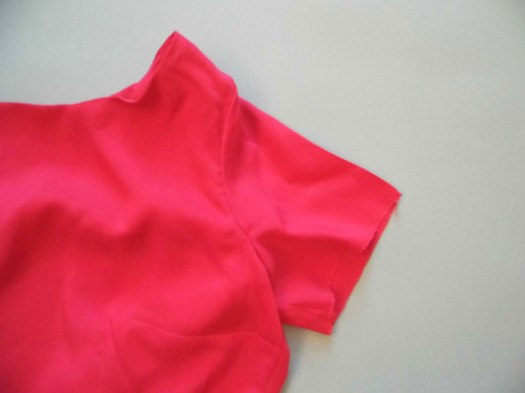 And although the bodice is lined, I decided to do french seams through both the shell and lining layers because of the fraying problem, and I feared any hand stitching would show on the right side of the fabric – it’s pretty thin and bruises easily, so even picking up one thread might have left a mark.

Also pockets because pockets. And pockets with french seams (except for the first seam where you attach the pocket to the skirt pieces, because I forgot/wasn’t sure that was possible.

Part of the skirt is pleated…. 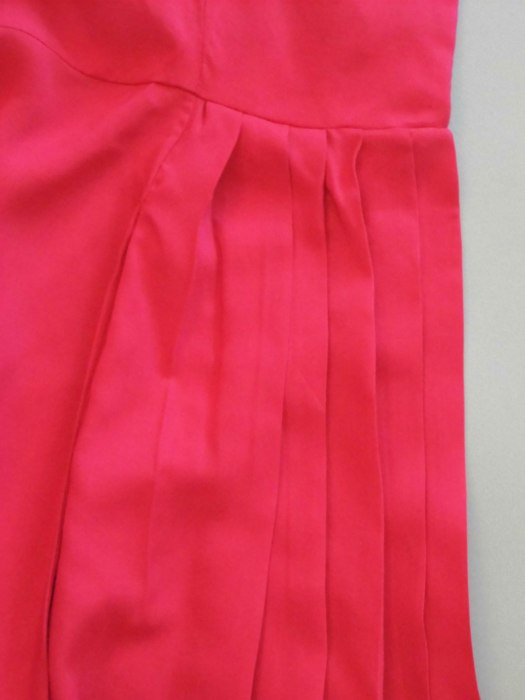 And there will be a split on the front, if I can ever bring myself to cut the fabric! I found a Burda tutorial that said you can make a split by sewing fabric on the top in 2 lines really close together, then you cut between the 2 lines of stitching and turn the fabric to the inside, which neatens what would have been an exposed edge. It said to interface the piece you sew on the top, but I haven’t because I didn’t want to mess with the drape and didn’t have any interfacing light enough. This weekend I’ll have to suck it up and cut the split. Or unpick it completely, but that might leave a mark! 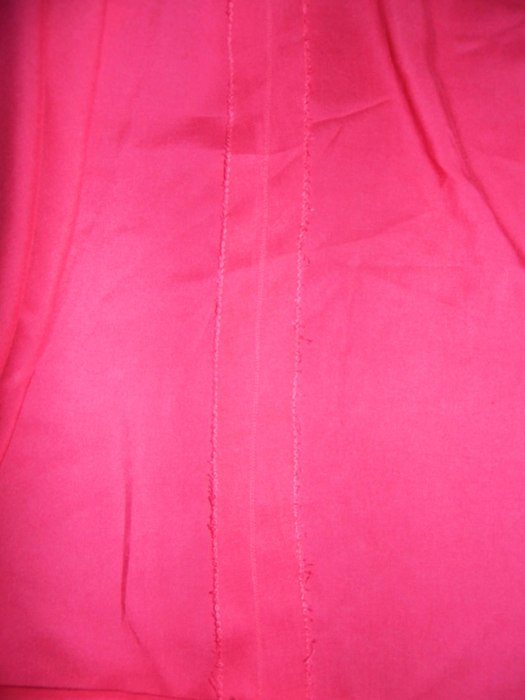 Are you going to the Dressmakers’ Ball? If so, do you have as much to finish on your dress as me!? What colour are you wearing? Are you making something new or wearing something you’ve already made? I was tempted to wear my navy lace dress I made to go to a wedding in last year – if only it was like the Oscars and there was an after party, then I could wear both!

I made a pink  maxi Alix Dress and I love it!

I actually made this back in November – it was one of the things I planned to make that month – for a party in the middle of the month. I also wore it to my work Christmas dinner last week. People can dress up as much as they want for the Christmas dinner and most people did not dress up as much as I did, but I didn’t care because I love this dress. Also there was a guy in almost a tux (it was a normal suit with a posh shirt and bow tie!).

I made the size 10 as it perfectly matched my waist and hip measurement, thought it was 2 inches too big for my bust. I made a toile of the bodice (the cups, yoke and waistband) to see how much fullness I had to take out – I thought it might have been more or less than 2 inches. I took 1/2 inch out of each cup in the end, having measured my full bust measurement and my high bust measurement, as demonstrated by By Hand London in their sewalong to the Georgia Dress. To do the actual small bust adjustment I hunted around for a pattern with a sewalong with similar cups with gathering at the bottom as I wasn’t sure how best to remove the fullness. Then I had a brainwave – Tilly and the Buttons’s Fifi pyjamas. I followed exactly the instructions in the bust adjustment post and it worked perfectly. I probably could have taken a little more fullness out of the armpit area, but I think the fit is pretty good, if I say so myself!

The fabric is this cerise plain viscose from Abakhan. I ordered a sample first to check on the shade of pink and realised the fabric was maybe a little thin – I didn’t want a Princess Diana moment of the skirt becoming see-through, so I decided to underline the dress. This gave it a nice weight so means it moves well when I walk. I don’t know if this is something everyone know – this was my first time working with viscose – but my god does it crease! You can see above the creases around the arms and across the waist because I wore it to the work party but didn’t iron it before taking this photos! Even lightly folding up the pieces once I’d cut them out, I had to really iron them as they looked like they’d been screwed up in a bag for a month!

I doubled the cups, the front skirt and the back of the dress – the yoke and waist panel are self-lined anyway. I ordered 7m of fabric. The pattern calls for 4m for the maxi dress but I was pretty sure I wouldn’t need fully twice the amount – I find By Hand London sometimes overestimate the fabric required.

I really love the huge pleat in the back, and the waist tie means I can cheat that it fits better across the back than it probably really does! Fun fact, then back piece of the dress is one piece – that was fun to cut out!

I like the pleats on the top of the skirt front and the ones on the shoulders, which I forgot to take a detail shot of! This is a good dress for eating a big meal in, by the way! The tightest part is above the stomach so you can look chic but there’s room for a full belly, especially because of the pleats! 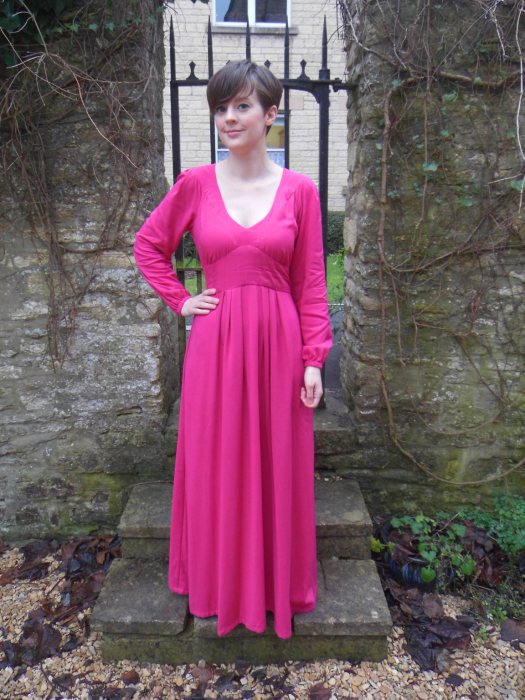 Apart from the sba, the only other change I made was to cut 8cm off the length, leaving 4cm for the hem. I measured the finished length of the dress before I made it and should really have shortened the pattern piece, but I wanted to make it the full length in case I decided to wear it with heels, then it would still reach the floor. I decided to wear flats, though, in the end, so 8cm came off the hem. I found with the Elisalex dress that I was shorter than the person the pattern was drafted for, so I think it’s a standard change for me to shorten BHL patterns.

I hope you’re impressed, btw, that I ventured outside to take some photos! Finally! I’ve felt too silly to do this in the past as our flat in London didn’t have a garden (obvs) so since moving into our flat in Cirencester, I’ve been meaning to go into our shared courtyard-y garden-y type thing and it was fine. Most of the other tennants don’t use the garden much, expecially in this weather, so it’s relatively private 🙂 It gives a truer sense of the colour of the fabric too, which is a bonus!

This is definitely a good dress to flounce about in because of the fullness of the skirt – it’s just pleasing how it moves when you move. It’s not so great for climbing stairs but that’s a small price to pay for such a cool dress! 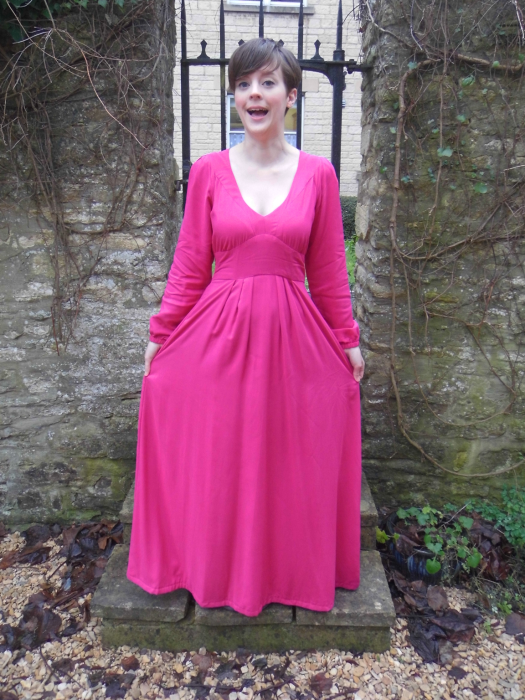 I really enjoyed making this pattern even though it’s not usually the kind of style I’m drawn to. I love, love, looooove that it has no fastenings! Makes it seem quicker to make somehow. I think I’ll have a go a the tunic version, probably to wear at work, and maybe the mini dress, though I think this is my least favourite length. I’m sure sewing this pattern was influences by my watching Good Girls Revolt around the same time. This was a really good series, I thought, made by Amazon, but they’ve said they’re not going to make any more, which is a shame. Did you watch it? What did you think? There were lots of comparisons to Mad Men because of the era, but I thought it was less polished, in a good way.

And now I will leave you with an outtake from my photoshoot – with thanks to The Boyfriend for taking loads of photos to make sure there were at least a few I was happy with! Not sure what’s going on here…….

And zoomed in for extra lolz……. 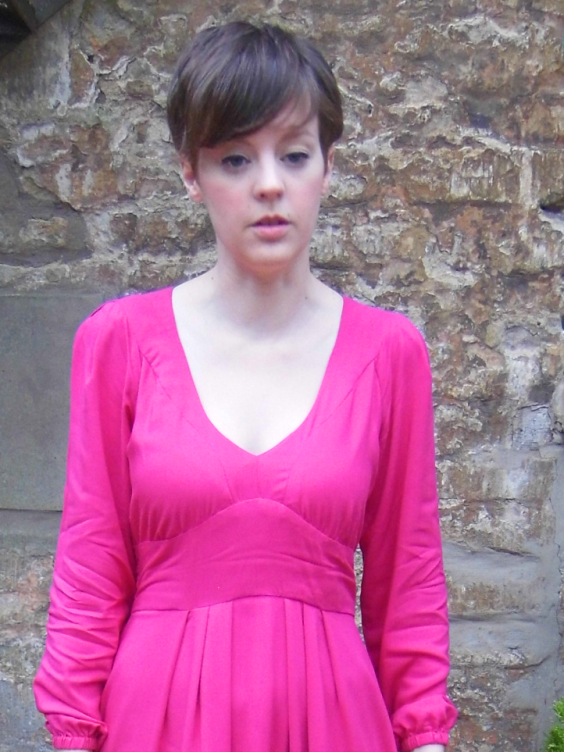