Since I live in the UK I’m always looking for stylish ways to keep warm (though thankfully it is finally warming up after what feels like an  infinite Winter!) and so I’d had my eye on the Blackwood Cardigan by Helen’s Closet for a while.  I think I might have bought it when she expanded her size range on it (and congrats to her for now having all her patterns in a more inclusive range of sizes!).

Anyway, all that is to say that towards the end of last year I made 2 Blackwood Cardigans and they have got quite a bit of wear each since they were finished.

I made both cardigans in the size small of the longer view and I didn’t make any fitting changes – it’s a relatively loose fitting pattern and doesn’t have fastenings across the front so didn’t require any fiddling around for me.

I had both of these fabrics in my stash for years so I’m glad to have finally got around to sewing them up! The burgundy fabric was from the Birmingham rag market at Sew Brum I think 2 or 3 years ago! I was thinking back then to add burgundy to my colour palette as I thought it would be a good compliment to the other colours I like – mustard yellow, navy blue, grey, black etc. Though looking at these photos and how I feel in it, I’m not sure the colour really suits me so I may not add more burgundy pieces to my wardrobe! The fabric itself was pretty cheap and it really synthetic, so it’s not the best but it was good enough for an experiment. 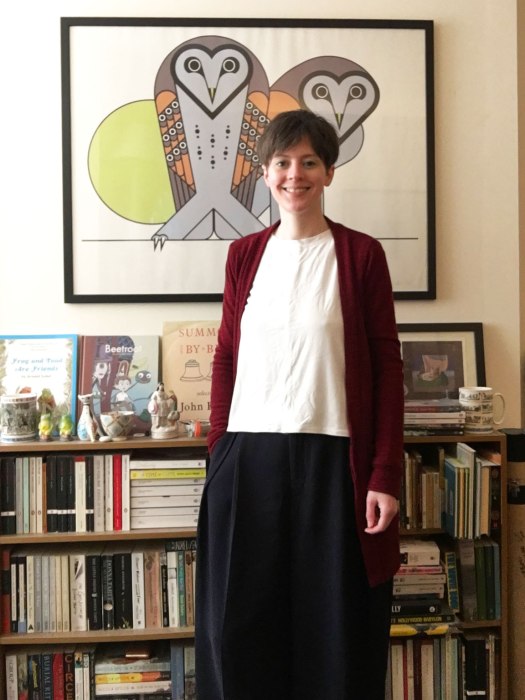 The mustard yellow fabric was from Tilly and the Buttons’ mini fabric shop they did a year or two ago when her previous book, Stretch, came out. She’s had another book out since, so this has definitely been patiently waiting in my stash for quite a while! This fabric is sooooo much softer then the burgundy knit, so you can feel the difference in quality. But this one has pilled quite badly already, with not a huge amount of wear as it was too cold to wear it for a couple of months. It also seems to have stretched out a bit – you can see it’s longer in the sleeves – and I think in the length – than the other one.

Even though we’re having some nice weather in the UK at the moment, since we’re not allowed outside for more than an hour, I’m still needing my cardigans and knitwear as our flat is much colder than outside, sadly.

If you’re looking for an easy project to make from some knit fabric, then this should definitely be on your list. I think it would be nice in more of a sweatshirt knit, too, actually. 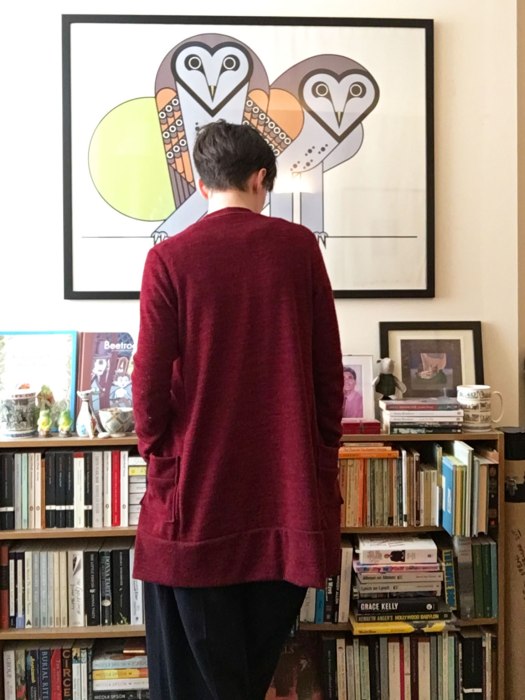 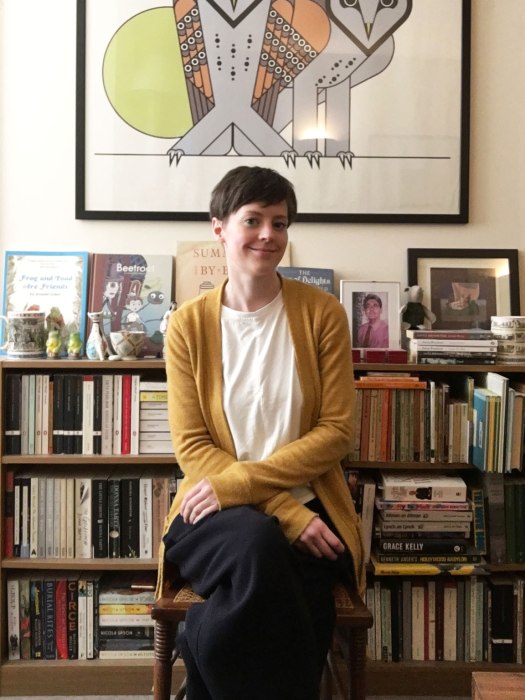 After listening to a recent episode of Love To Sew, I realised I always take my photos all standing up and there is a growing discussion that it would be helpful for wheelchair users or other people who spend a lot of time sitting, to see how garments look when we are sitting down. So from now on I will include sitting photos of all my makes. I am also listening to the discussions about taking multiple views of garments so others can see the fit across, say, the back, or from the side. I already did this quite consistently on here but I think I didn’t tend to share all the views when I share my makes on Instagram, so I’m going to try to do that more too. 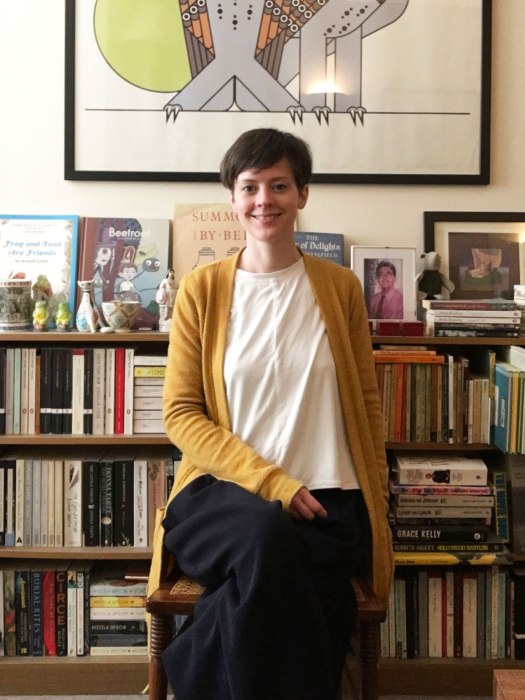 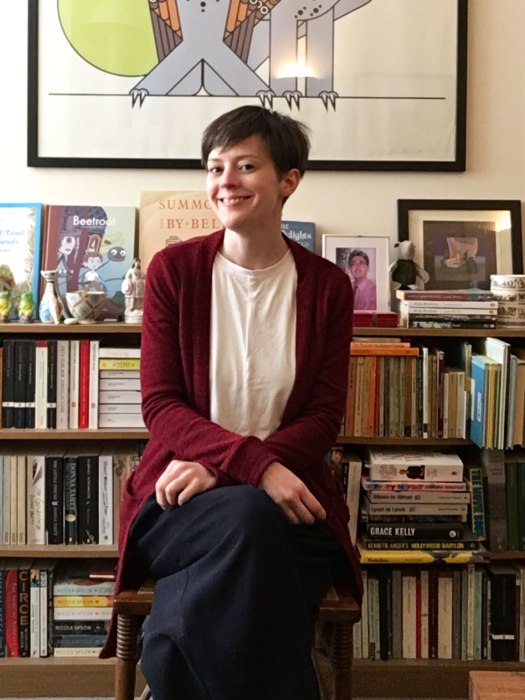 Since I’ve been taking my photos myself with a remote for my phone, outtakes haven’t been as common as they once were, sadly. But please enjoy this gem. I legit look like I’m getting up to smash the camera/phone! Lol!

Are you sewing all the things or have you lost your sewjo given what’s going on in the world? I’m flitting between the 2. The first couple of weeks I sewed loads, then last week I did very little of anything productive. But this week I’m feeling enthused again!

Well this little blog has been rather neglected recently, hey!?

And now I’m updating during a very weird time in the world, and in the UK specifically. We were officially placed in lockdown last night because of the Coronavirus, which was the right thing to do to hopefully mean that the NHS isn’t overwhelmed and as many people survive the illness as possible.

I have definitely been struggling with heavy anxiety as the situation has worsened but I’m glad that I have sewing and music, both hobbies which bring me joy and calmness (most of the time, when I don’t have to unpick too much!), and which I can do still at home while in isolation.

But that’s enough about that – I’m sure we’re all a bit fed up with thinking and talking about it – so here is some sewing I did back in October! I have a bit of a backlog as you can imagine after 6 months of not posting!

Here I present 2 Elliot Sweaters which I love! The pattern is, of course, by Helen’s Closet. I was a bit torn between this pattern and Tilly and the Buttons’ Nora pattern and I feel like they came out at about the same time, but I went for the Elliot in the end as I like the roll neck better. Though I think I may have to cave and get Nora too as I’ve got some knits in my stash which I think would look good in the more slouchy style. 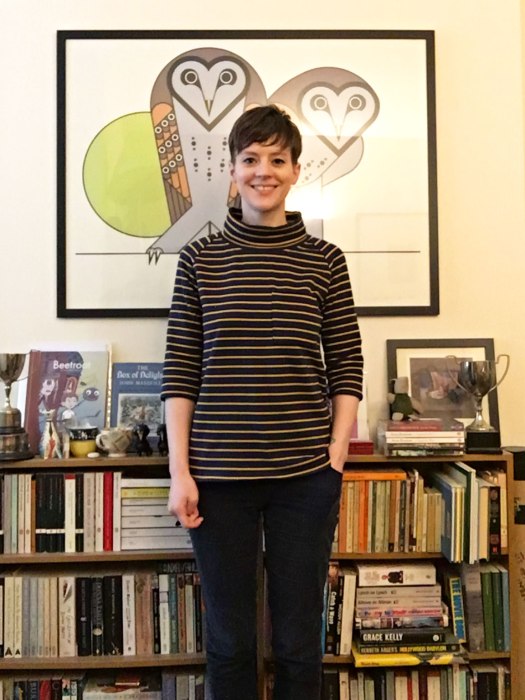 I have worn both of these tops so much since I finished them in October! I work in a bookshop, where we have to have the doors open and I really really feel the cold so I have been layering them up with thermal tops underneath and thick cardigans in the top. I’m looking forward to spring (if we’re allowed outside by then) when I can hopefully wear them on their own – especially as I like the sleeve length and it gets hidden under cardis!

The pattern is super easy to put together so I’d definitely recommend it for a knits noob.

I especially love how the hem dips down lower at the back – though I should have done a slightly deeper hem all the way around as this fabric rolls out like crazy so you can basically always see the overlocked edge on the outside. Sigh.

The only tweak I made to the pattern was to add a little pocket to each one. I can’t now remember which pattern I stoke the pocket from – maybe the archer shirt – but you can use any breast pocket pattern.

I matched the stripes on the pockets so that they would kind of blend in. When I first got the fabric – which I think was from Material Girl Laura – I thought about using the navy fabric as the pocket on the mustard top and vice versa, but I decided against that in the end as it would have made too much of a focus out of the pockets, and that wasn’t really the look I was going for.

I made both tops in the size small and I like the fit over all. I could maybe have gone up a size to get a more slouchy fit, which I might do if I make the pattern again. 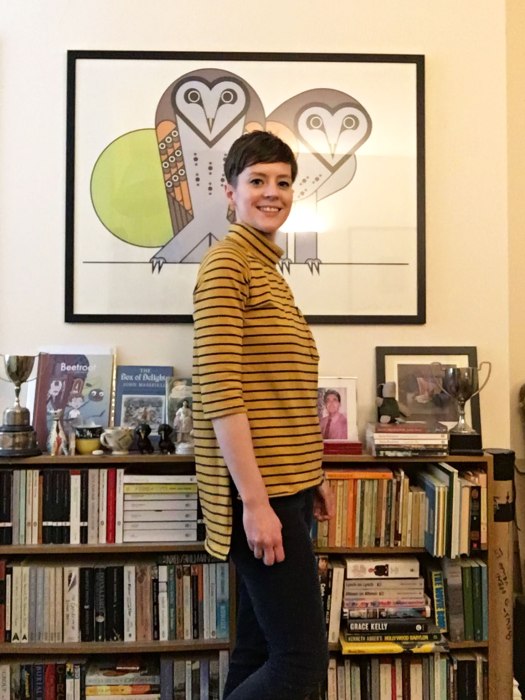 I especially love the mustard colour of this version. If you’ve been reading my blog for a while, you’ll know how much I love mustard yellow!

I managed to mostly pattern match the side seams, which I measured from the armpits as the hems are obviously at different lengths. Because of the raglan sleeves, it’s impossible to match all the strips but I really don’t think anyone would notice that the stripes aren’t perfectly matched everywhere! 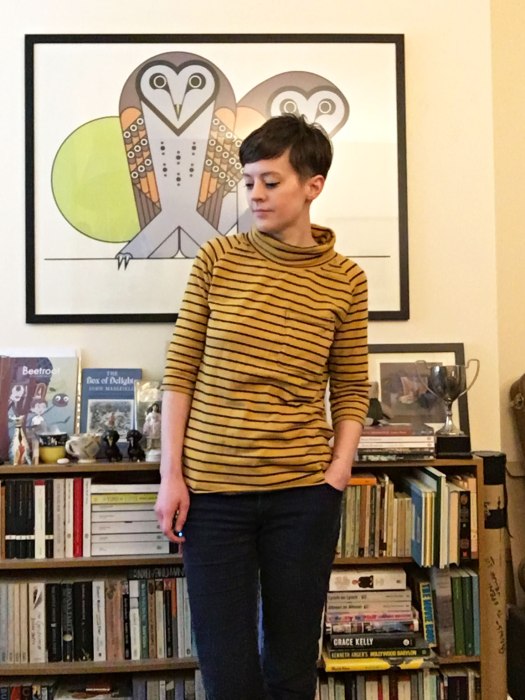 I am hoping to get a bunch of isolation sewing done – maybe I’ll finally catch up on my backlog of projects I want to make!? Are you planning to sew all the things too?