On Saturday  the boyfriend and I went to see the Christmas lights being turned on in Cirencester and it was really lovely. We all sang a couple of carols then Ben Miller (or Armstrong and Miller fame), who is apparently local pressed the button then there were fireworks on the roof of the local church. It has definitely got me feeling in the festive mood so I thought I’d share my pick of homemade presents I’ve made for various people in the past – I have no ideas of things to make this year, so if anyone has any ideas I’m definitely looking for some inspiration!

One of the most versatile and adaptable presents you could make is a tote bag – you can applique something on it to suit the person you’re making it for. I’ve made them with a car, a strawberry and BBC’s Sherlock on for various people!

For your tea-loving friend or relative, why not make them a tea-cup candle? You can flavour them with any essential oil – I used chocolate, mmmm.

Do you have a friend who loves lego? If so, you could make them a lego doorstop – there isn’t a huge amount of knitting involved, so you’ve still got time to make this in time for the big day! 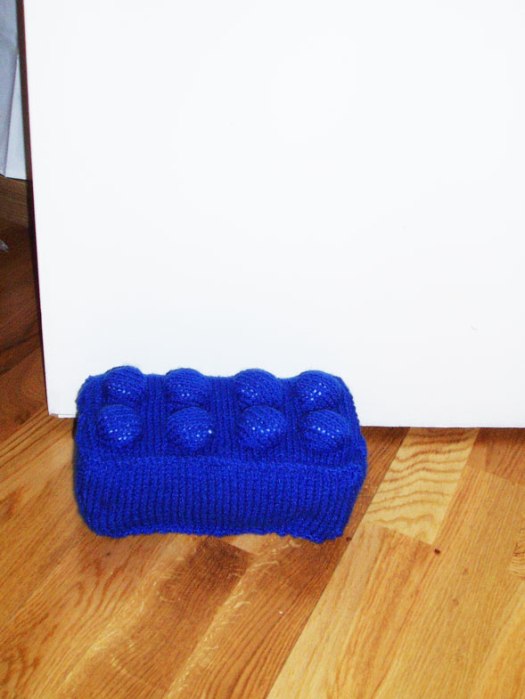 You could make a genuinely one-off present in the form of a scrapbook, as I did for my dad’s 65th birthday.

For your music-loving friend or relative why not make a vinyl record clock? 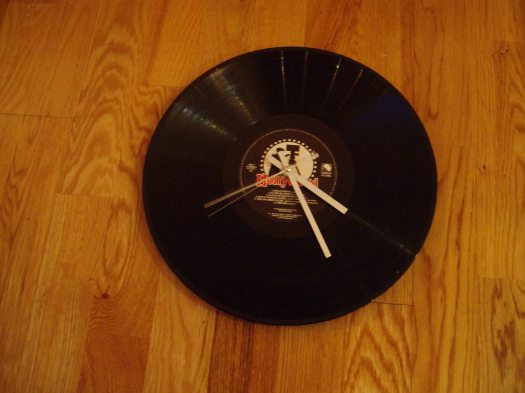 For your friend or relative who loved cooking and baking you could make them a lovely apron – there are lots of free patterns out there. I used the one from the first Great British Sewing Bee. 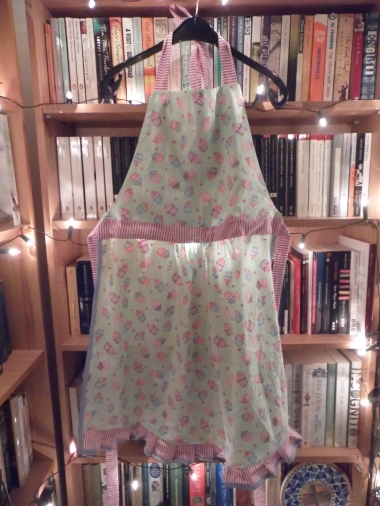 If you have a friend or relative who loves running or exercising, you could make them a useful present in the form of a running armband to hold their phone and keys while they’re out doing their thing. 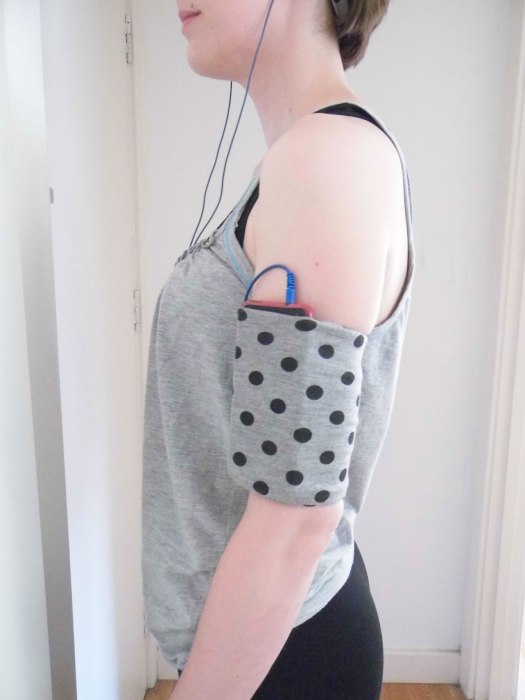 If you know a kid who needs entertaining while traveling (or at other times!) why not make the travel match game I made for my friend’s daughter? 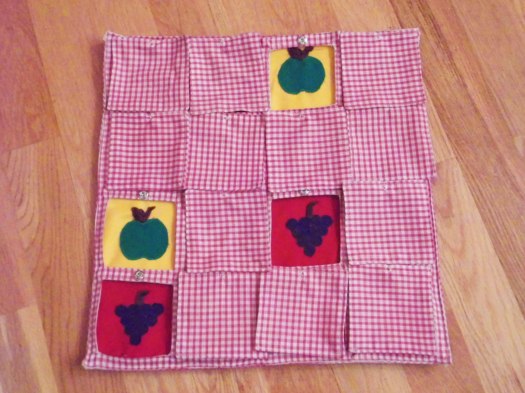 If you know a kid (or have a kid) who would like to learn about growing things, why not make them a felt allotment? (p.s. this is really, honestly, one of my very favourite things I’ve ever made – I was more excited to give it away than I think the recipient was when she opened it!)

Why not make their favourite book into a cushion cover……..

Clothes are sometimes a good option for kiddies (though they will grow out of them in no time at all!) I’ve appliqued babygrows, made dungarees and made the cutest dresses with matching knickers! 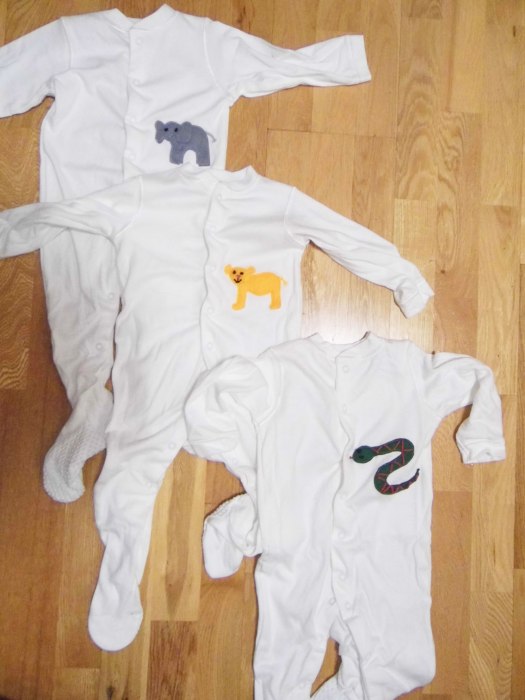 Are you making any homemade presents this year? I’m not sure I’ll have time to be brutally honest, though my sister has asked me to make her some skirts so I think that will count….if I get them made in time?!

I love a good internet meme. And this bayeux tapestry one is one of my favourites. I was chatting to my Aunt on the phone a few months ago and I think she might have told me about it – we were talking about other ‘don’t give a fuck’ memes too.

When she mentioned this meme, I googled it and found someone else had embroidered it on a cushion and thought this was a fantastic idea. I filed it away and planned to make it for my Aunt’s birthday, which is at the end of September. We’ve both had a pretty crappy few months so it seemed even more appropriate by the time I handed it over – a little late, oops!

I used the picture at the top as my inspiration and drew a version on paper – an A3 sheet (2 A4 sheets stuck together). I started with the writing – it was quite fun to make sure it didn’t look even or straight! I would not have had the skill to do it neatly! I traced everything onto greaseproof paper, then traced it onto the calico – it’s quite good how you can draw on calico! And because you’re sewing over it, it doesn’t matter if it doesn’t all come off.

I like the 2 different kinds of ‘e’ and the random dots at the ends of some words. Also the ‘v’-shaped u’s. I did make one mistake though – can you spot it? (The a in barren doesn’t have the cross part, it’s just an upside-down ‘v’.) I sewed all the letters with really thick embroidery thread from my local sewing shop, using backstitch so the lines were unbroken.

I added a simplified version of the house thing in the photo. This is mostly to fill the space above the men! Again I used backstitch.

The men are maybe my finest hour of embroidery – again it’s a good job this wasn’t meant to look amazing! I decided to put just 3 of the men and not all 4 – I thought 4 might be pushing it! I did the outlines in brown embroidery thread – the kind you get with crossstitch kits. I used 2 strands at a time.

I bought 4 different colours of thread – gold, red, green and black. I used the grey mixed with the brown for the cape of the dude on the right. I pretty much copied the colours from the picture as best I could. I slightly with I hadn’t done the 2 bright colours on the same guy on the left. But he does have an excellent moustache, so there’s that. 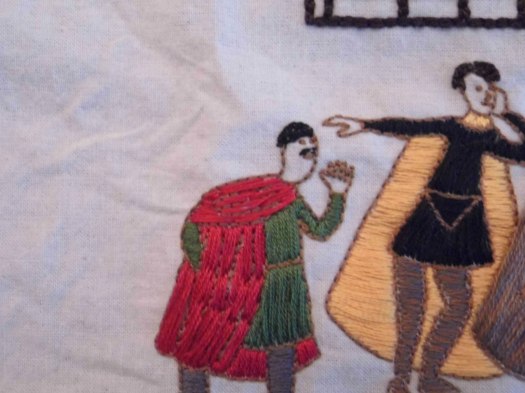 I just used long stitches to fill in the lines as quickly as possible basically – I don’t know what the stitch is called, though.

I asked the advice of my friends when I’ve done all the above about whether to add some soil-type lines and they all agreed yes. And they were definitely right – it looked a bit bare before I added them. This is what it looked like before I sewed the front to the back.

I had left the piece of fabric quite big so I had room to change the proportions according to the cushion inner thing. But in the end I made an inner cushion and used toy filling to stuff the cushion. I think I stuffed it a bit full, though, because you can’t really see all of the embroidery unless you squish it a bit.

Here is is all finished!

And here is is on my sofa – it took so long to make it look good, it was ridiculous! I’m not great at styling I think – any tips? 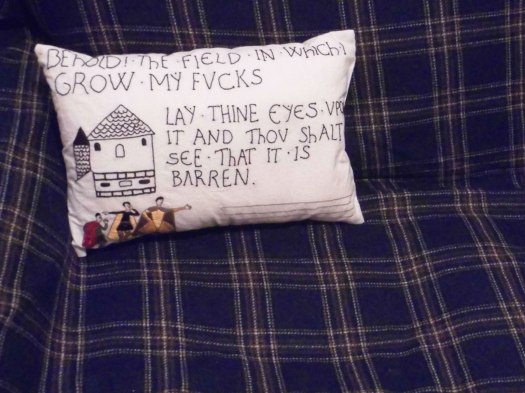 My aunt took this photo of it on her chair and made it look sooooo much better! She’s definitely better at styling!

Do you have a favourite meme? If so, please post it in the comments to give me a giggle 🙂 Would you be tempted to embroider it on a cushion? It could be a good Christmas present for someone!