I can definitely see why the Dawn Jeans pattern by Megan Nielsen has been so, so popular with basically everyone who has made them! It is honestly true love! I had some more denims set aside to make more Ginger Jeans, but (spoiler alert) I made more Dawns instead! 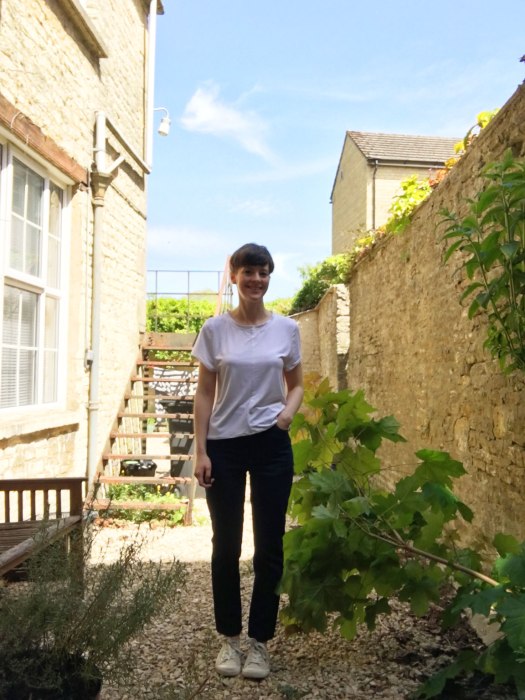 I made the size 4 with the straight leg option. The waist and hip measurements for the size 4 are exactly my measurements (26″ and 36″). I seem to remember (it’s a while since I traced the pattern) that there are different leg length options – I defo did not make the tall length, lol! I am 5’3″ for reference.

The fabric is some really nice dark non-stretch denim which my friend gave me from her late mother-in-law’s stash. I think it had probably been folded waiting to be sewn for a while as there were lines like this every so often. Luckily I fitted all the pattern pieces around the lines.

It’s quite a nice, soft denim and it feels really comfortable to wear. And because I had so much you can definitely expect more garments made from this denim (it’s like the mustard corduroy that NEVER RAN OUT – suit, dungarees, cleo dungaree dress,)

I did make some fitting tweaks. These were kind of meant to be a wearable toile but the fit was pretty good straight out of the packet so they’re more than that now! I did baste the jeans together to check the fit and I took an extra 2cm off the back seam (tapering off to the normal seam allowance 20 cm down from the top of the yoke). I took an extra 1cm off the crotch seam on the inner leg seam, tapering from mid-thigh. I also did a 5cm hem.

I should have taken some close up shots of some of the details – duh! I measured the pocket placement for the back pockets once the jeans were basically constructed to make sure they were at optimal placement for my particular bum! 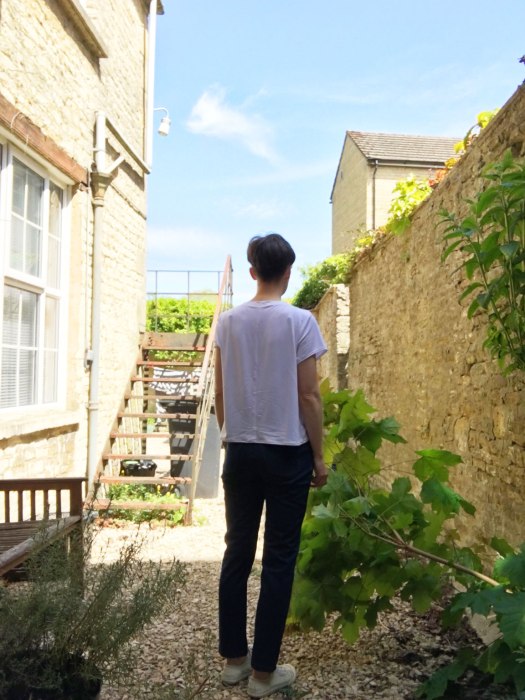 The thing I especially love about this pattern is how high the waist it – it means these are as comfortable to sit in as to stand in! The waistband also tapers inwards perfectly for the shape of my waist. You couldn’t really see in the photos of my Ginger Jeans, but the waistband sits slightly away from my waist.

The buttons look like they’re struggling a bit here (lol), but the jeans don’t feel too tight – I think it’s just the nature of a button fly compared with a zip fly.

I did contrasting jeans top-stitching on this pair, though I don’t use actual top-stitching thread as my machine doesn’t like it, so it’s just normal thread. This means the stitching doesn’t stand out as much as it might, but I’m okay with that to not have the nightmare of trying to get my machine to sew with topstiching thread. I tried it for my denim Moss skirt and it did not go well so I vowed to not use it again!

Another detail I like about the construction of the Dawns is that the belt loops are sewn into the waistband seam at the bottom (and then top-stitched at the top) whereas with the Gingers they are top-stitched on at the top and bottom, and they just don’t feel quite as secure (or look quite as nice as you can see the raw edges inside the loops).

I don’t know why I didn’t tuck my t shirt in, by the way, and was just holding it out of the way! 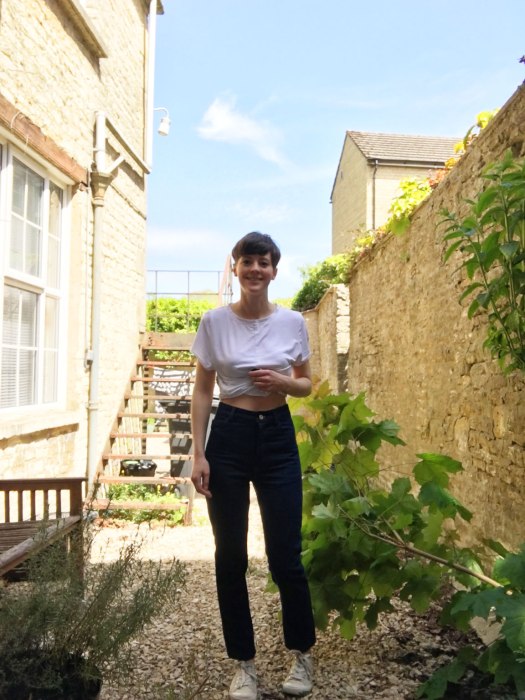 When I made my Morgan Jeans I got the button placement wrong – I put them in the middle of where the button holes were, but that means the fly (which is obvs supposed to be hidden) is slightly visible. The Dawn pattern, though, tells you to put the buttons to the inside of the buttons holes (if that makes sense) so the fly remains hidden. I still put off attaching the buttons for a couple of days though – anyone else feel the need to psych themselves up to attaching jeans buttons?

I have worn these jeans a couple of times since I finished them and they are really comfortable. I think they have sagged a bit at the bum, but that’s to be expected with non-stretch denim I think.

If you don’t like seeing jeans, btw, you’re going to get bored in the coming months as I’ve got 3 more pairs planned/ made!