So since it’s New Year’s Eve, I thought I’d do the obvious thing of looking back over the last year and seeing what I’ve made and done. This was inspired in part by the Instragram #2015BestNine hashtag.

I’ve made myself 14 garments, which isn’t really that many – I have felt like I haven’t had as much time for sewing as I would have liked.

I particularly like my BHL Victoria Blazer, and definitely feel smarter when I wear it instead of a cardigan.  I like my Merchant and Mills denim Dress Shirt, too. 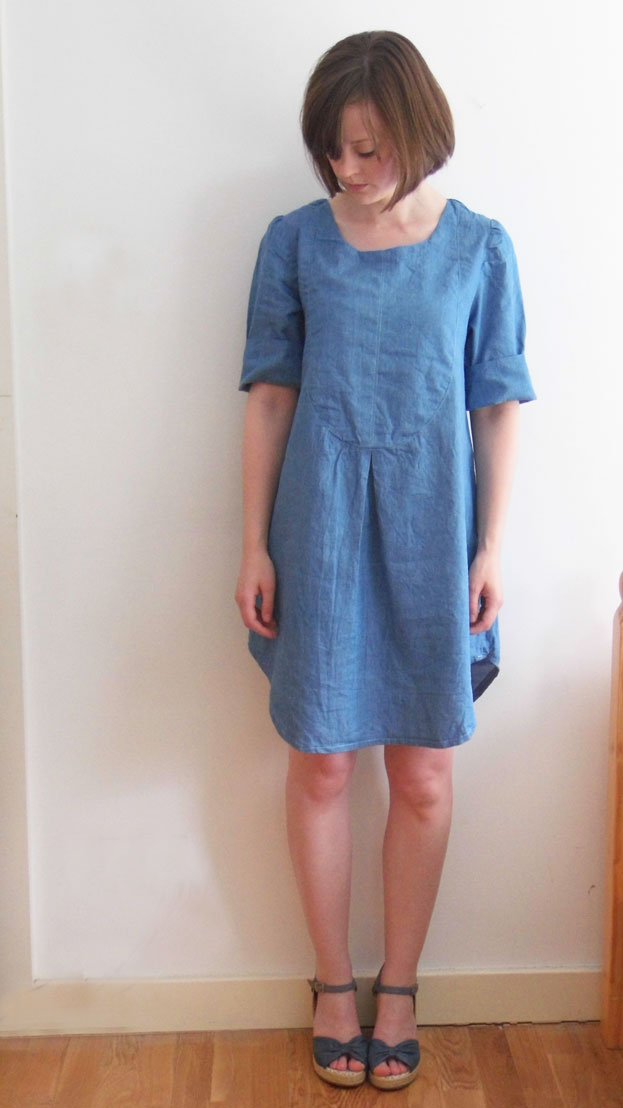 I made a few things with knits, for the first time this year: a Closet Case Files Sallie Maxi Dress; a Tilly and the Buttons Coco dress; and a Breton-style Deer and Doe Plantain Tee. 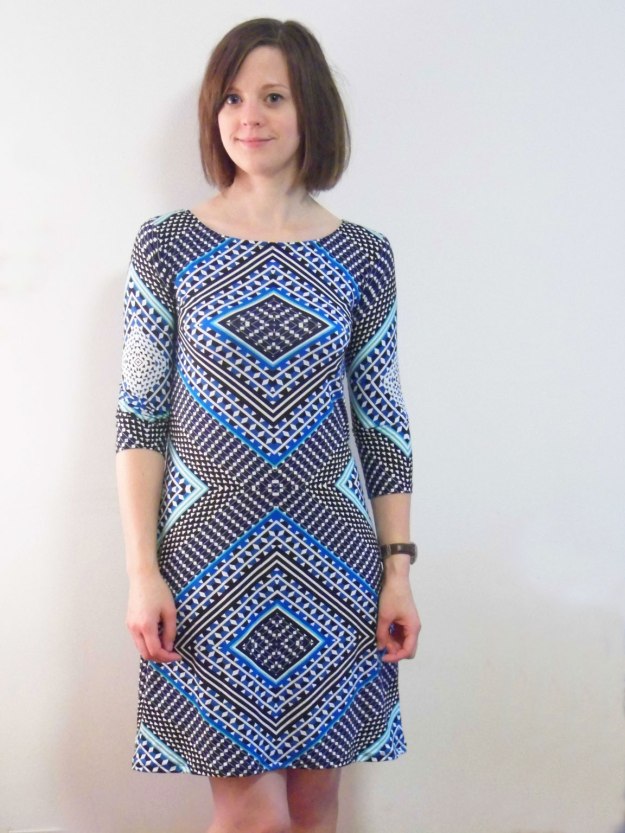 I have also refashioned 7 things, so I’ve been a bit more productive than a first glance might imply!

My 3 favourite refashions were my ugly skirt to Grainline Scout tee (which I unfortunately shrank in the wash, boo!), my Refashioners Dear Creatures rip-off and, probably the one I’m most proud of, my ugly coat which I remade into a Freemantle Coat. 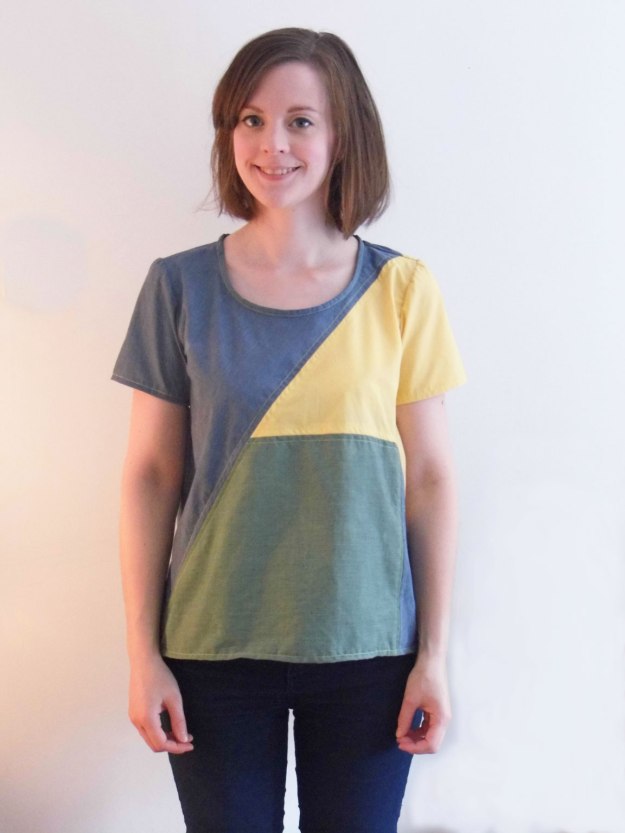 I’ve made 6 non-clothes things, including my first (pusheen) and second amigurumi (a Minion), and my first scrapbook, for my Dad’s 65th Birthday.

But my very favourite non-clothes thing (and probably favourite out of everything I’ve made) was the felt allotment I made for my friend’s daughter for Christmas 2 (which happens in January so this was made this year). This was one of those things that I saw on A Beautiful Mess and knew I had to make it, and then was super excited to see my friend’s daughter open it! I was almost too excited to wait until the present exchange, and wanted to open it as soon as I arrived for Christmas 2!

This is the anniversary of this blog, too – I had an old one but transferred the content over and focused just on sewing and crafty things (I had previously written about food and books too), and I’ve introduced a couple of new regular posts – style inspiration and fashion history. I’ll continue with these I think, as they help me to cement my personal style and guide me what to make next! I’ve also reviewed some books, events and shops. You can see the archive of all these posts here.

Thank you to everyone who has read my blog this year and I hope you’ll come back in 2016. xx

You know when I posted about making Pusheen, I mentioned that I made him as practice for a bigger crocheted thing which was a present for someone? Well, the larger thing was a Minion (from Despicable Me) for my mum, and here he is: 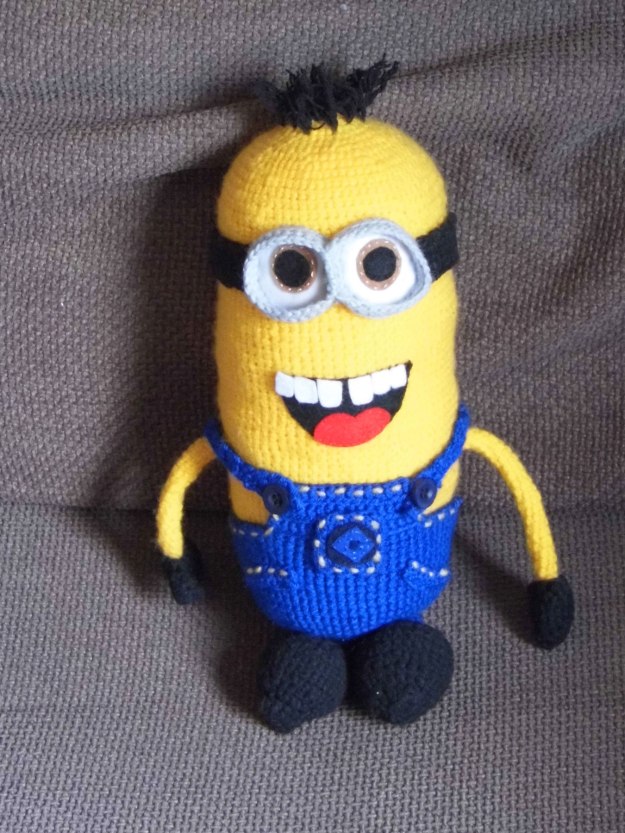 I used the brilliant pattern from All About Ami. She also has a post giving more detail in how to make all of the parts of the minion, in case you get stuck (like I did!).

The thing that takes a lot longer is all the other little bits, like on the dungarees. 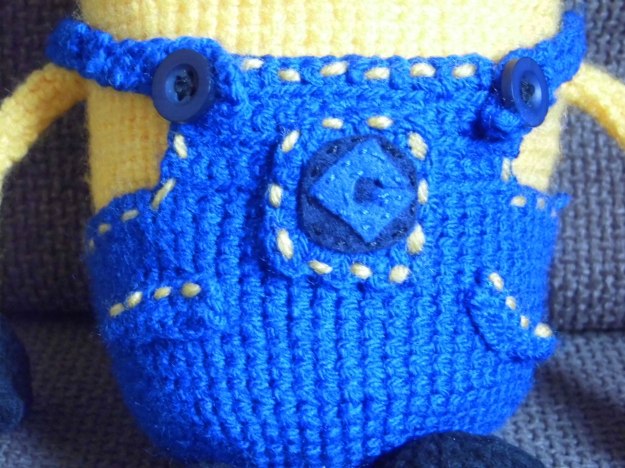 I had to make the dungarees 3 times as my tension changed so they came out way too small. Twice. Then there’s the little square pocket, the 2 side pockets and the straps. The you have 2 arms, 2 thumbs, 6 fingers (though I didn’t make the fingers as I feared they would be too big and overtake the hand) and 2 feet. Then there’s the goggles.

I made the goggles slightly wrong, partly because I didn’t understand the instructions and partly because I ran out of time. We had a family gathering in May for my nephew’s second birthday, and I tried to get the minion finished for then so that I could give him to my mum in person. I didn’t quite make it, but I think having that deadline helped as once I’ve missed the deadline of her actual birthday (in March), I felt like I could really take my time! The rest of the face was pretty quick to make and didn’t cost anything as I have quite a stash of felt now after making my Sarah and Duck cushion for my nephew and the felt allotment from my honorary niece.

The goggle strap was easy – I’m not sure if you’re meant to sew it on or if the goggles are supposed to be removable, but since I’d done the front of the goggles wrong and they kept collapsing in on themselves, I didn’t think they would keep their shape if they were removable, so I sewed it all onto the head.

I don’t think I have too much else to say about the construction as it’s all really well covered in Ami’s blog post, so instead I took a couple of silly photos.

Here’s the minion looking for Despicable Me in my DVD collection (don’t tell him it’s not there!). 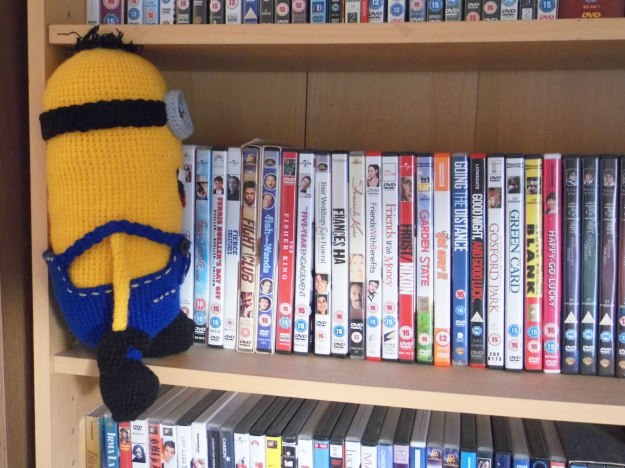 And here he is in bed with my childhood teddy, Cutie. They’re best friends.

My original plan was to make 2 minions (the tall one with 2 eyes and the shorter, fatter one with 1 eye) but making 1 took so long that I nipped that in the bud pretty early on. But I did enjoy making him, so maybe one day he’ll get a sidekick!