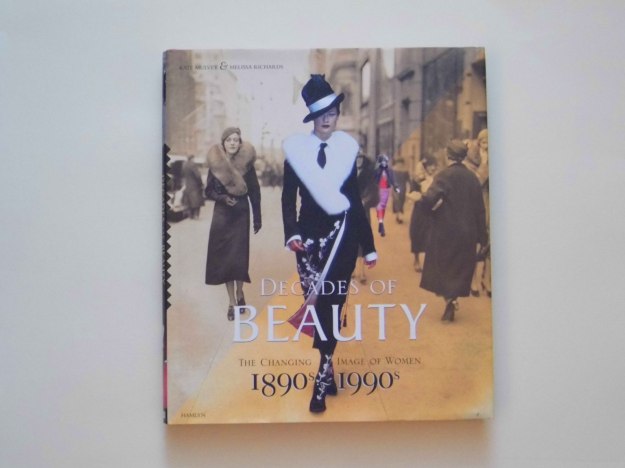 A couple of weeks ago, The Boyfriend earned some real Brownie points by buying me this book from our local Oxfam. I saw it in the window on my way home on the Friday when they were already closed. He then went out on the Saturday morning to get bread and milk and came back with the book, before I had a chance to buy it myself! Aw!

I love this picture of the woman (in I think the 20s) running on the beach! Also fair warning, there are a lot of photos in this post!

The book takes you through each decade of the hundred years from 1890-1990, looking at fashion, beauty and hair trends as well as a brief outline of the historical happenings and social norms for each period. 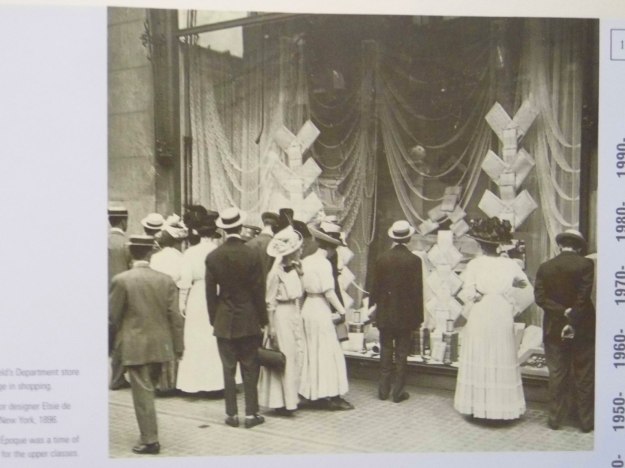 Each decade gives you 3 style icons that typified the fashion of that era, or were perhaps a bit groundbreaking for their time. I love that Calamity Jane and Princess Alexandra are both there for the 1890s!

You also get hair and beauty trends for each decade – shame I’ve got such short hair, some of these look like fun! Especially the giant ‘do on the far left hand side!

Any clothing that requires first of all help to get into and second of all someone else’s foot in your back cannot be comfortable! 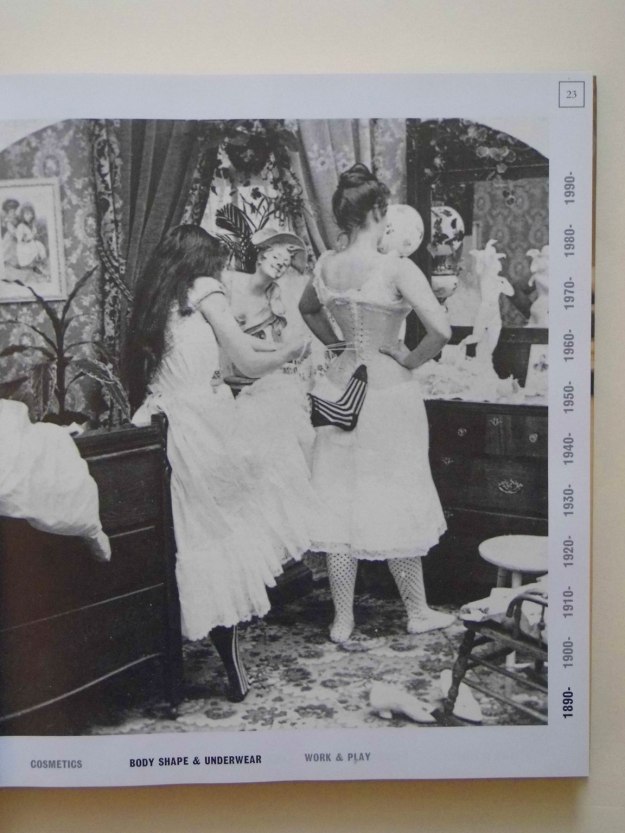 At least they weren’t likely to get sunburnt! I’m tempted to recreate one of these beach outfits…

I love this photo of women at work – in the US in 1908 – it looks like it’s some kind of textile work, though I can’t tell what they’re doing exactly – any ideas? The caption just says ‘women at work’. Helpful. 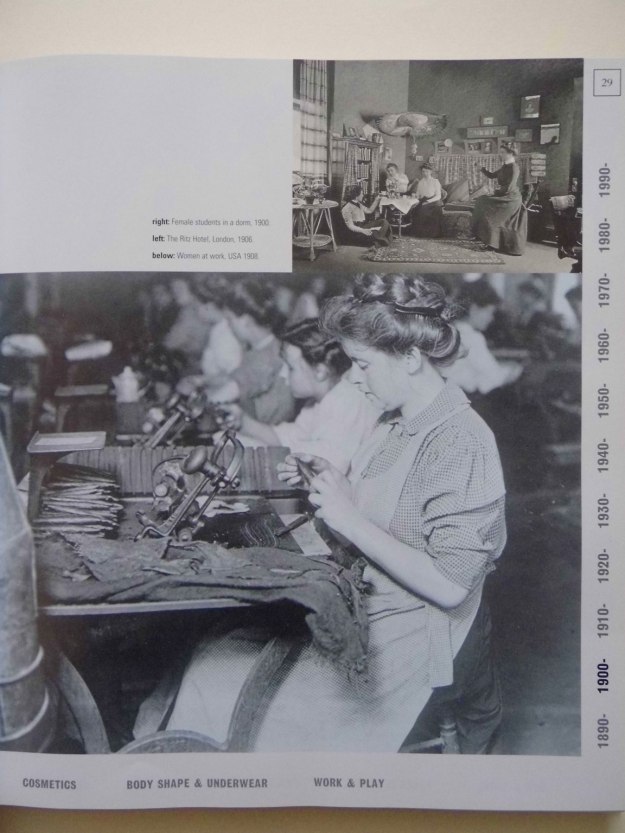 Here are the icons of the 1900s. The only one I’d heard of, shamefully, was Lillie Langtry – and that’s mostly because there’s a pub named after her in Norwich, where I went to university! Also one of my friends lived near Newmarket for a while and Lillie Langtry’s house was on the corner of the track leading to her house.

The below product looks like it will help you look healthy without needing make-up, presumably. But it contains arsenic, so I don’t think the ‘healthy’ glow would make you that healthy in the long run! 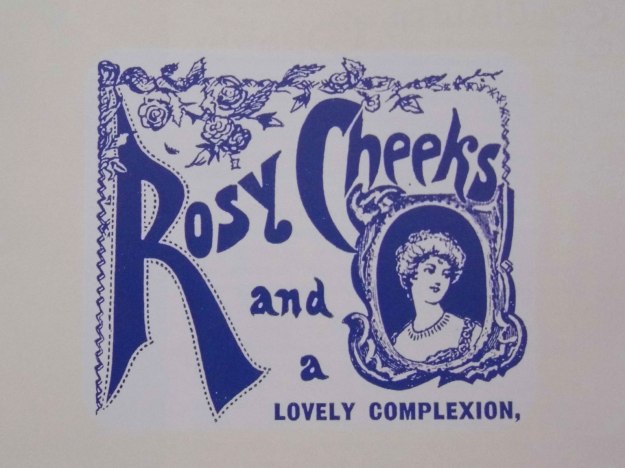 I refer to my above comment about corsets – no matter how much they might hope it, I’m sure it was no ‘a dream of comfort’! She’s so comfortable she’s taking a nap, after all!

And we think unrealistic body image is a new phemonenon……No-one could possibly have had a waist that thin and been still able to breathe, let alone admire oneself in the mirror.

Of course the 1910s was the era of the Suffragette and it’s good that this book covers the social context of each decade as well as the fashion and beauty trends.

This is the first decade where I recognise all 3 of the icons! 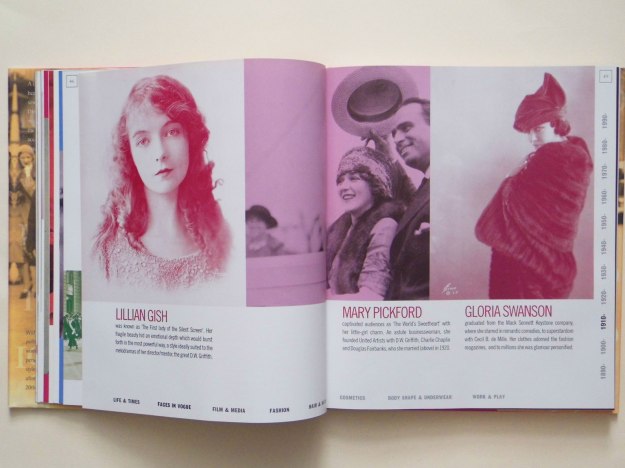 I love that in the earlier decades in the book there are fashion illustrations instead of photographs (obvs!). These ones are particularly great. There are also some designers who were particularly influential in each decade mentioned – I didn’t realise Lanvin was so early!

Also Elizabeth Arden started in the 1910s! No idea she – and the brand – were that old.

Oddly after I took all these photos of the book, I discovered a new podcast called You Must Remember This, all about the unknown and hidden stories from classic Hollywood. The first few episodes are random, but then she goes into themes – like dead blondes, blacklisted, stars at war – and one of the episodes is about this woman, Theda Bara. I haven’t had a chance to listen to it yet, but it was great timing because I thought she would be an interesting woman to know more about!

Black Ascot sounds super creepy, but I thought I would post this photo of the text that explains it – and how it influenced My Fair Lady!

I think 1920s fashion illustrations are definitely my favourites! 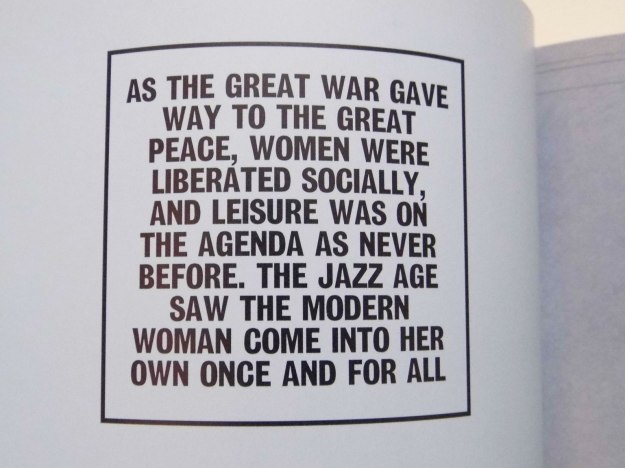 I love pretty much everything about this photo of Clara Bow – I especially want her shoes. And he hair actually – I’m thinking of growing mine out and this slightly frizzy ball might be achievable for me! 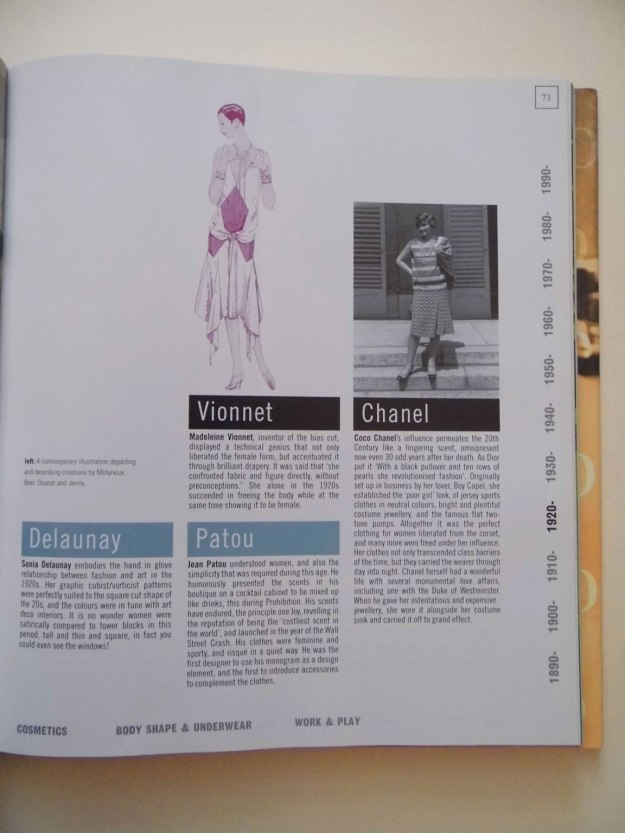 I absolutely love this! And it shows there must have been a bit of variety in the clothes people wore – there wasn’t just one shape or style that everyone wore, though there are, of course, similar elements.

Having said I loved the other photo of Clara Bow, I think that might have been in part because I can’t see her eyebrows. Check these out for a brow style! I’m not totally sold on them to be honest…

Another huge, famous make-up name which has been around much longer than I thought! Max Factor started in the 20s, who knew? 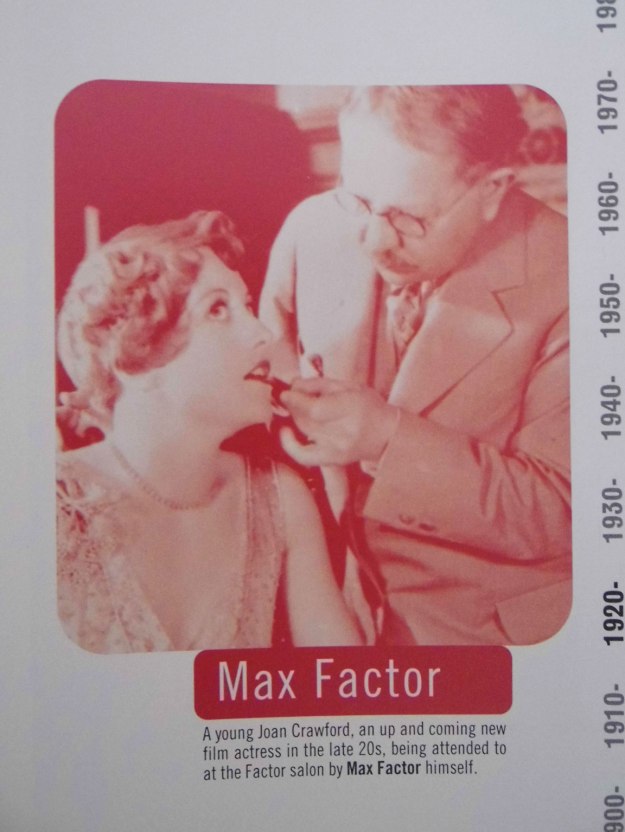 Having watched all of Miss Fisher’s Murder Mysteries about 3 times, I knew from watching a clip talking with the costume designer that she was desperate to do a tennis episode because tennis – and the associated clothes – was hugely popular in the 20s, it was pleasing to see this photo in this book. 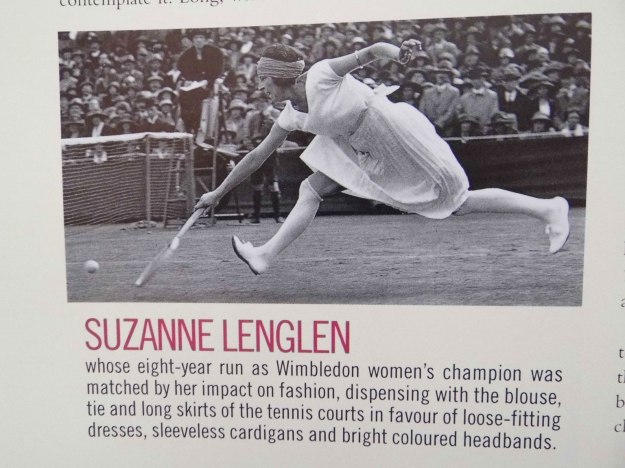 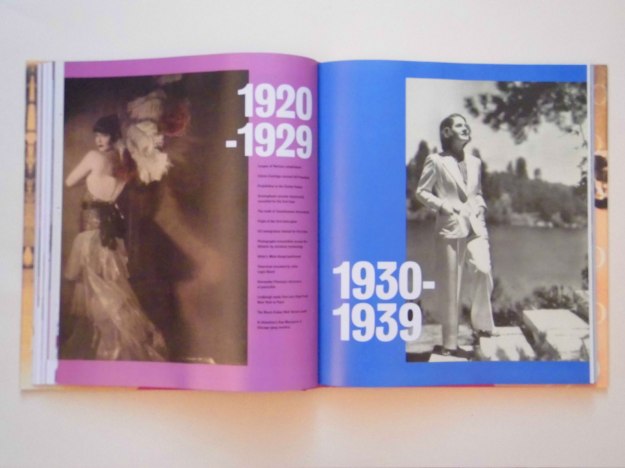 There’s not really much to say about these icons! Except I fancy wearing a tux one day. Maybe when I’ve sewn everything else I can think of, I’ll make myself a tux?! 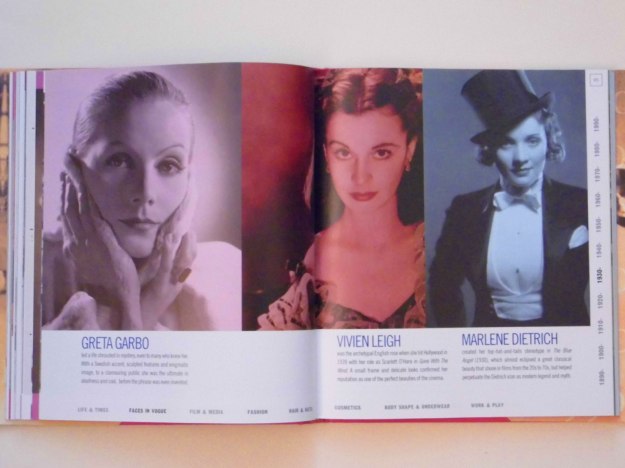 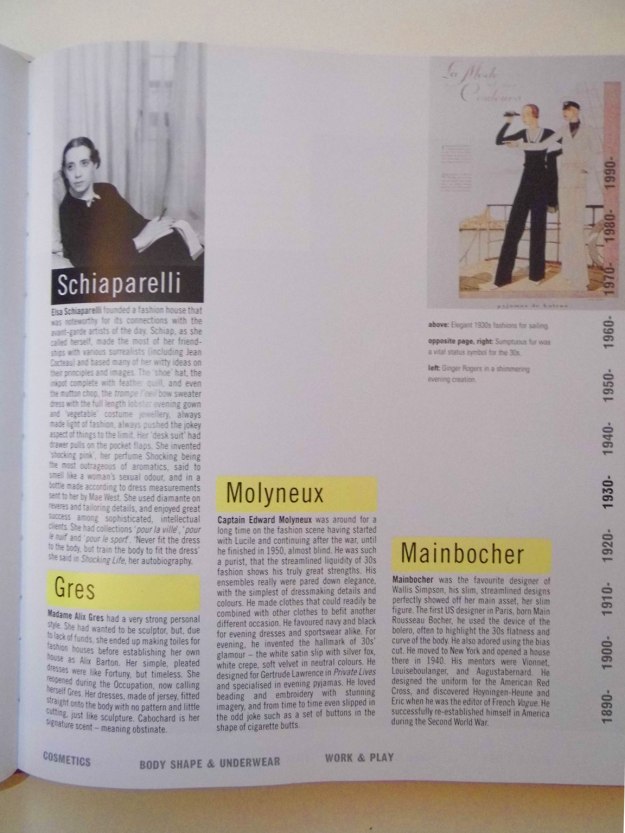 I read a whole book about Jean Harlow a few years ago – she had a very short life and a fairly tragic end, but she did pack in quite a lot! She was the first platinum blonde bombshell.

I couldn’t not include a photo of my namesake! Shamefully I don’t know much about her except that she disappeared. Though recently it was in the news that they thought there was a photo of her and her navigator on an island in the Pacific. Curiouser and curiouser.

Of course in the 40s women went to war. 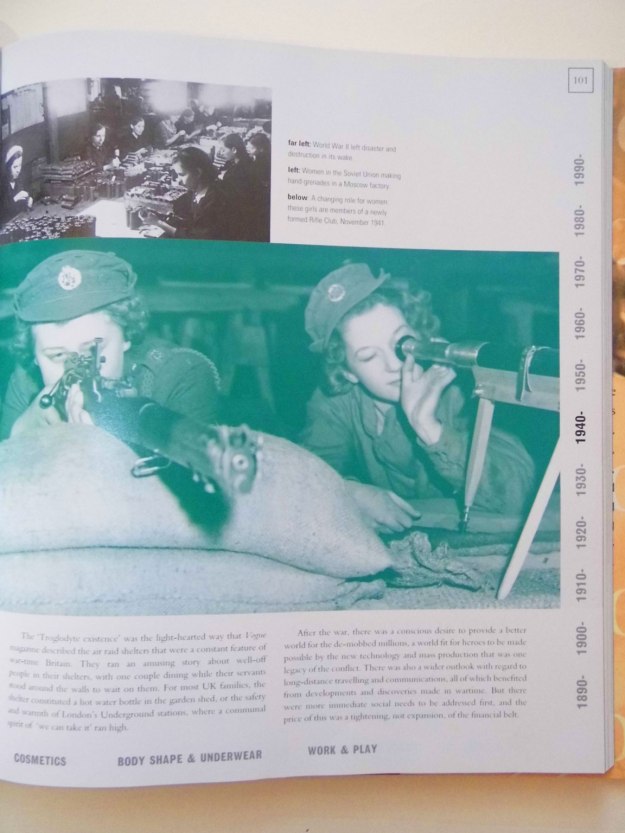 It’s funny to reconcile the above photo and the 3 women below – the reality of life for a lot of people during World War 2 and the continuing glamour of Hollywood. 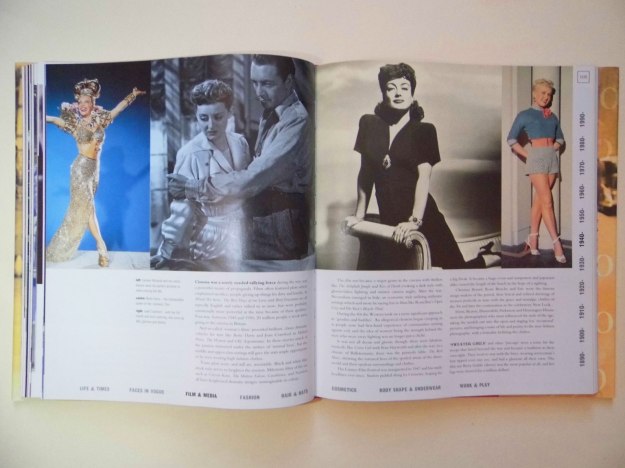 I pretty much only know Veronica Lake from her hair, so it’s funny to see this photo in the book – maybe that really was what she was most famous for?

The advent of the bra much had been a huge relief for all concerned – though I’m sure I read somewhere that the bra Howard Hughes made for Jane Russell was incredibly uncomfortable, so maybe sticking to corsets wouldn’t have been so bad, at least temporarily! 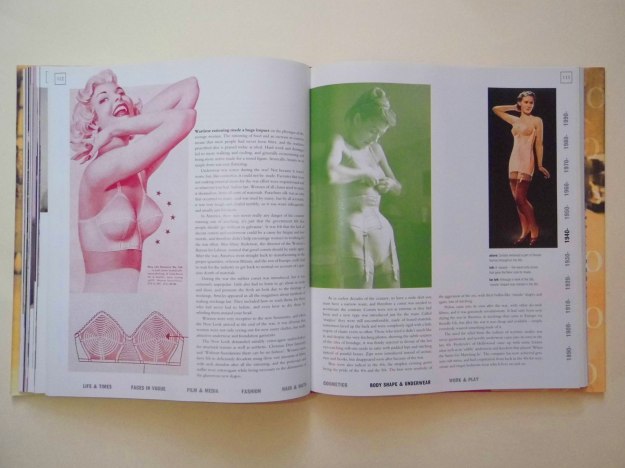 I didn’t seem to take so many photos of the 40s. Weird. Well, onto the 50s…. I like the contrast in the 2 photos below – black and white vs colour, austerity vs plenty.

And we get 3 of the most iconic actresses of all time in one decade! I definitely have a soft spot for Marilyn Monroe – Some Like It Hot is one of my favourite films. It was also the biggest decade for the Hollywood musical, but that doesn’t really get a mention here. 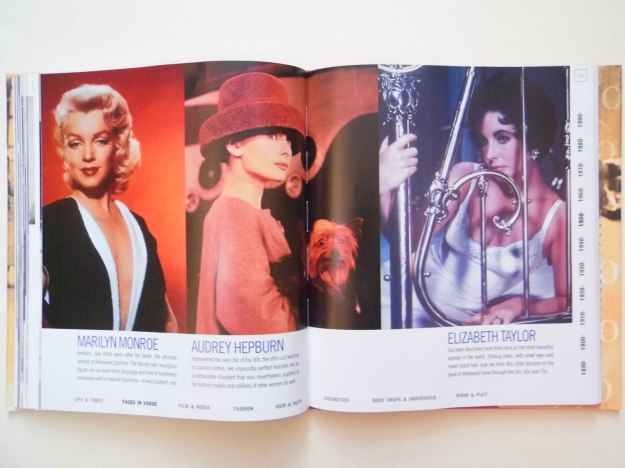 Ah, Givenchy and Balenciaga. I’m going to see the Balenciaga exhibition at the V & A in September and I am really excited! 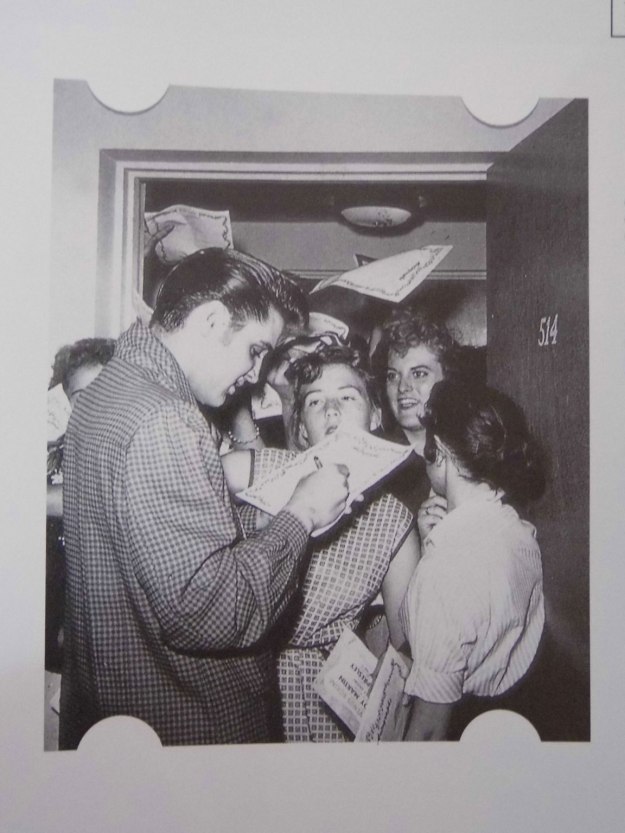 And onto my favourite decade 😀 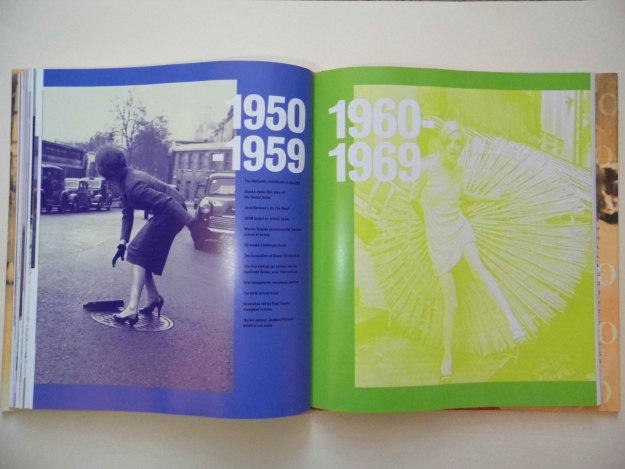 I love how different some of the 60s icons are – Jackie Kennedy vs Twiggy vs The Supremes. All great, in their own different ways. 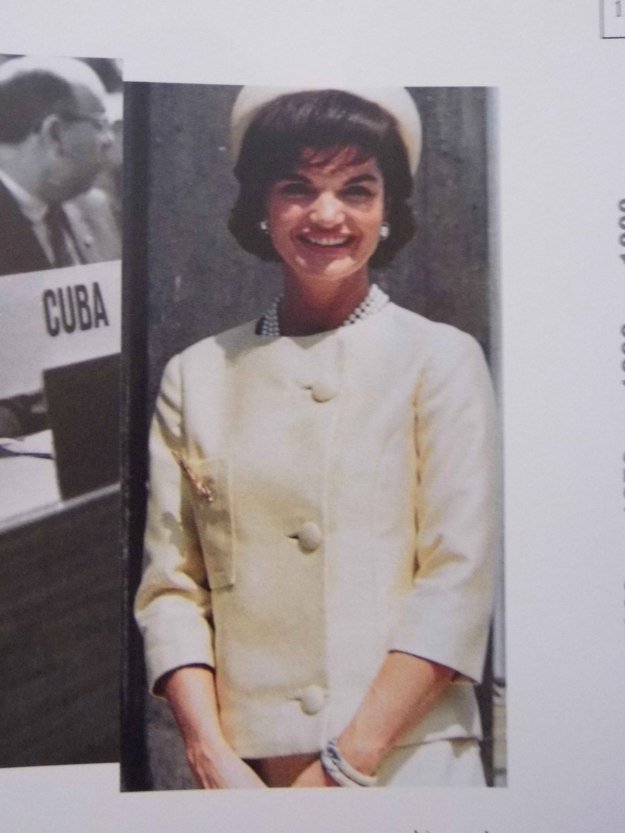 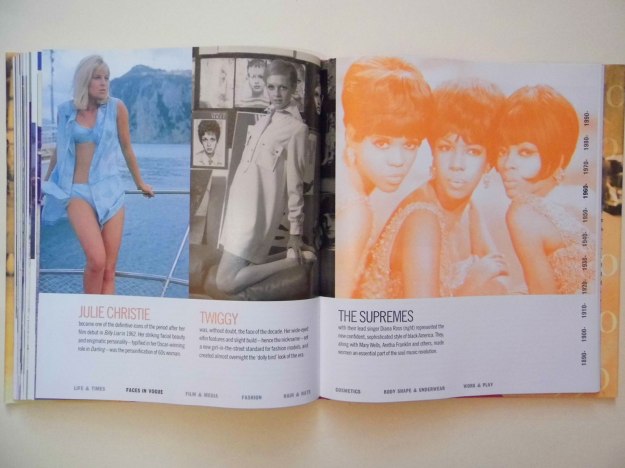 Edith Head is definitely someone I want to read more about – I read recently about the brown evening gown Bette Davis wears in All About Eve and how there was a mistake in the measurements so it ended up being off the shoulder when it wasn’t supposed to be. I bet there are loads of make it work moments like this throughout her career.

I think I might add all of these designers to my list of ones to cover in future posts. 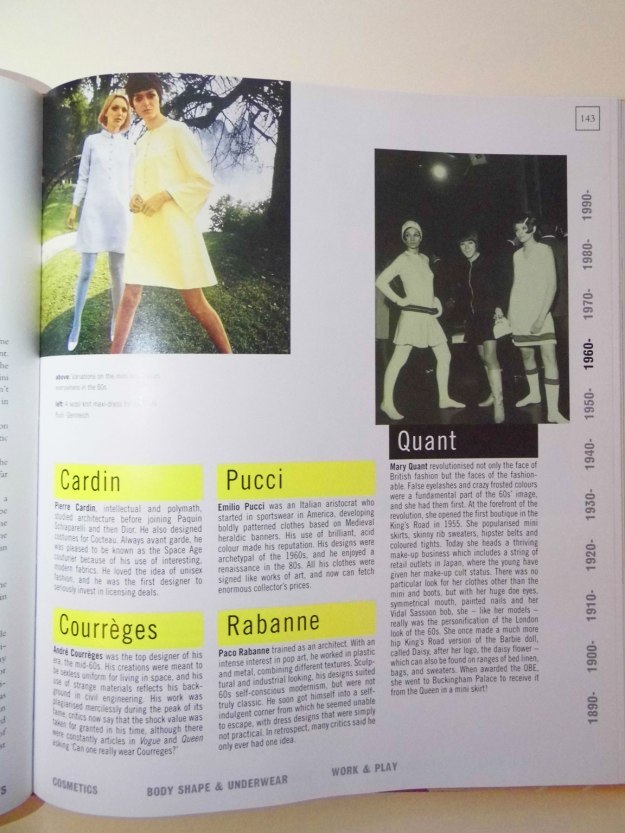 I’m sure I’ve mentioned this before, but this has to be the most iconic haircut of the 60s. I might grow my hair into this finally, and take the plunge!

I kind of love/hate the 70s. Some of the style is great but some of it less so! 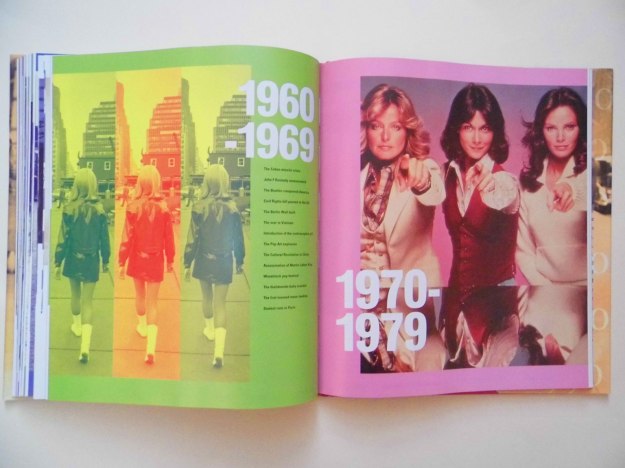 Possibly my favourite thing about this whole book is that Miss Piggy is one of the style icons of the 70s! 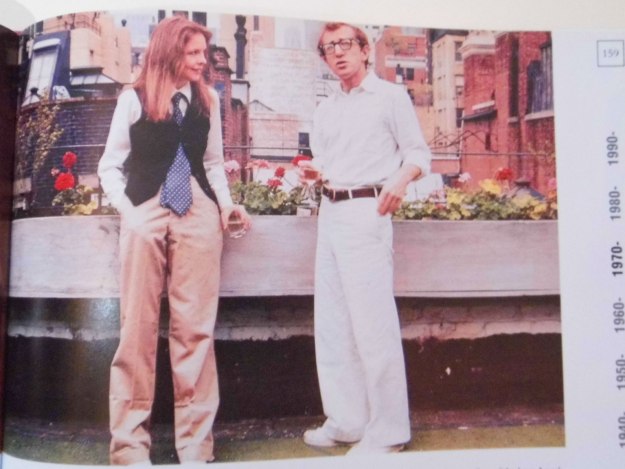 I might also cover all of these designers in future posts too.

It seems that the 70s was when jeans really took off, so I guess we do have one thing to be grateful to the decade for. 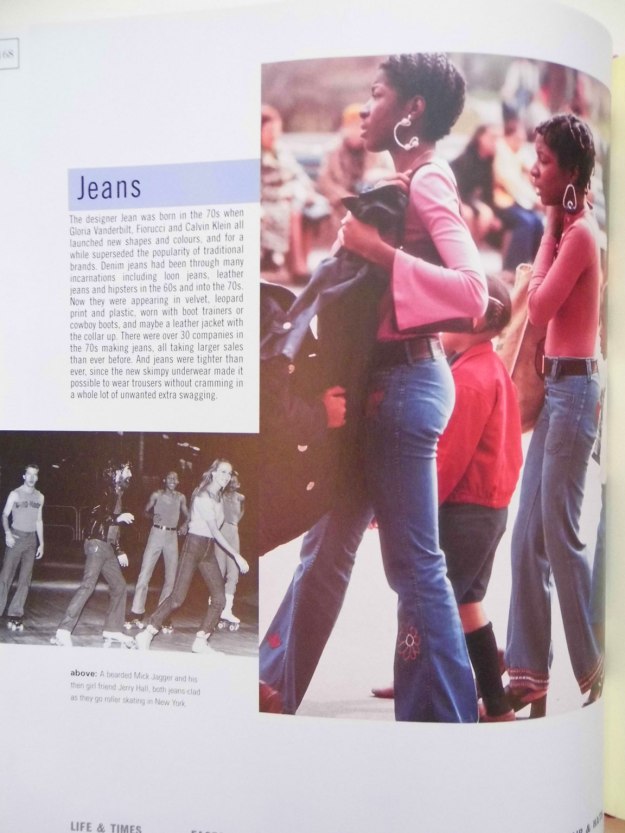 The photos for the later decades definitely got fewer…. 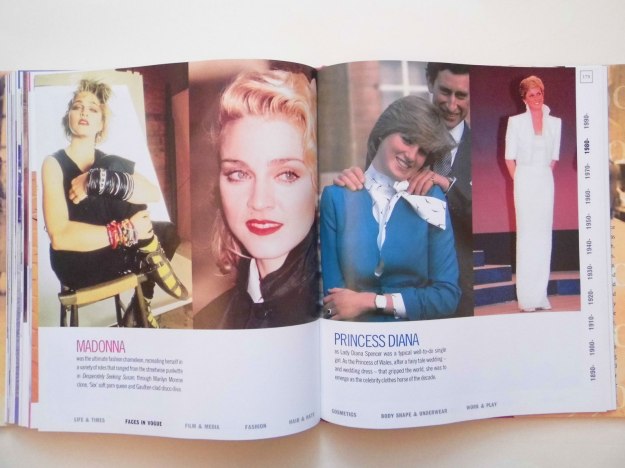 Dynasty has to be the most quintessentially 80s programme. 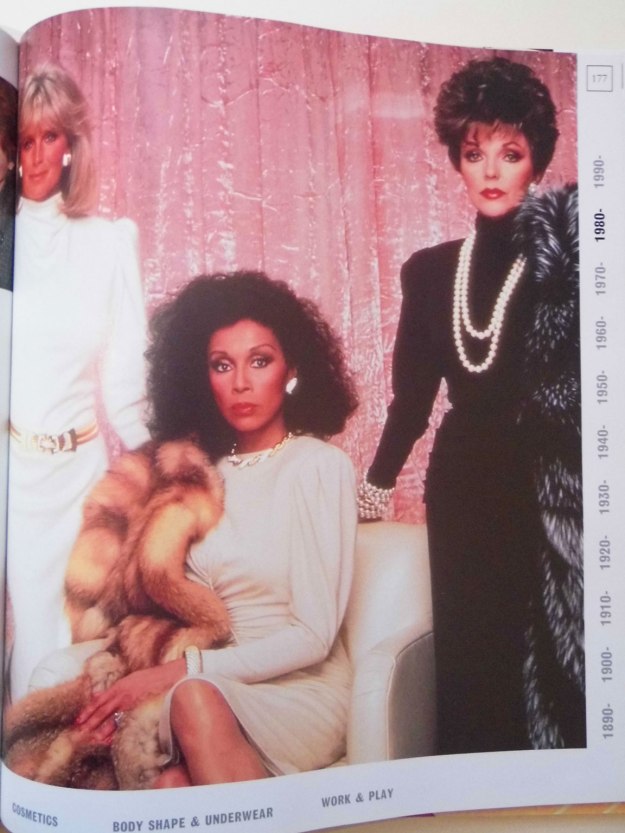 The gown on the left, from the 80s I think must be Valentino because it looks quite like the gown Julia Roberts wore when she won her Oscar, which was a vintage 80s Valentino dress. Apparently this kick-started the trend to wear vintage dresses on the red carpet. 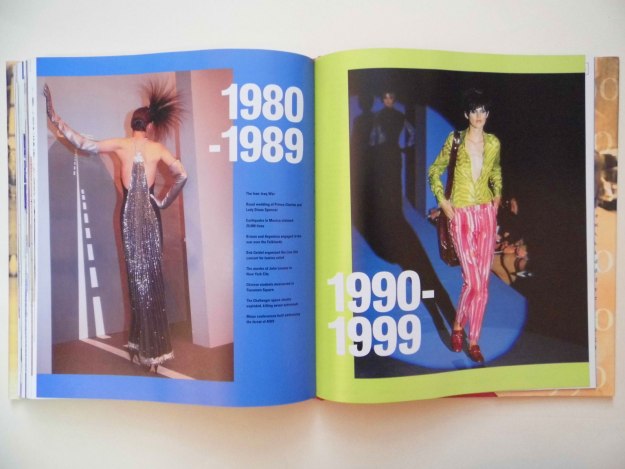 I feel like the 90s was kind of the start of fashion being comprised of multiple trends. 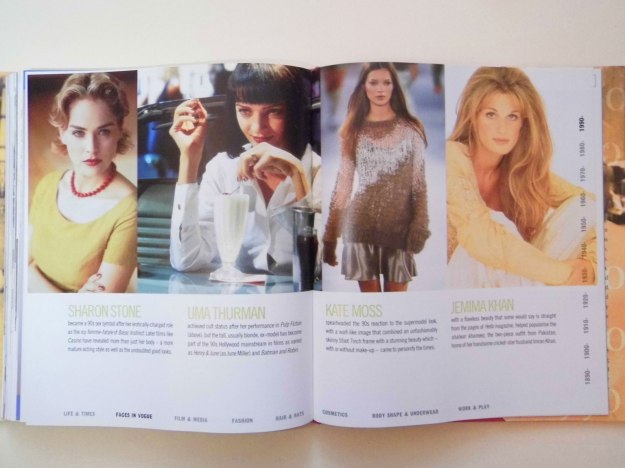 I think it’s fitting that the last photo I’m posting is of the Spice Girls, the most 90s of groups! Apparently Geri’s union jack dress was made by her sister out of a tea towel – if that’s true, it’s awesome that something made at the last minute became so iconic! 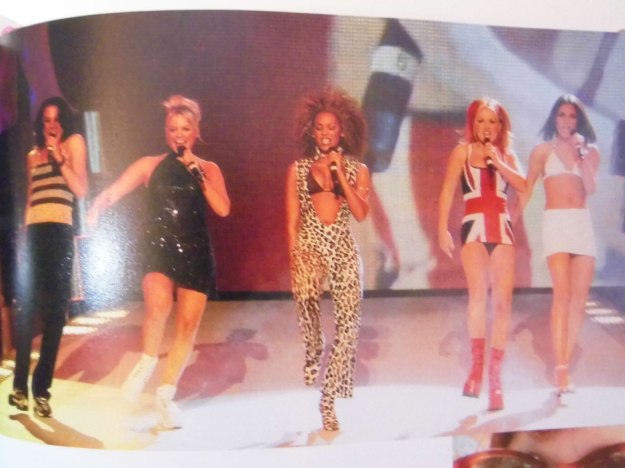 Do you have a favourite fashion history book?