I can’t remember if I mentioned on here, but my sister had a daughter back in April, to join my adorable nephew, who I’ve made a couple of things for in the past (Baby Dungarees, Sarah and Duck Cushion). My sister, Phoebe, asked if I would mind making a couple of Summer dresses for Alice (as my niece is called). She gave me the pattern and some fabric that one of her friends was getting rid of, so all I had to do was find the time to make them. I also used some fabric from my stash because some of the bits Phoebe gave me were a bit small and one bit was some old curtains, so I thought it would be way too rough for a little baby’s skin. So these were all very thrifty!

This was the pattern:

I’ve not used a Burda pattern before, so I don’t know if this is standard, but I found the instructions really confusing and pretty sparse. I may, therefore, have done some of the bits wrong, which led to the insides not being as neat as I would have liked, but I just couldn’t figure out what I was supposed to be doing! It’s good that it comes with different variations, though as I meant I could make the most of the fabric that I had.

First I made the romper suite version:

This was all fabric from my stash – the main fabric is one that was ruined when I pre-washed a load of fabric together and the pink one (that I used for the bias trim here) bled onto everything else. It kind of worked on this fabric, though!

I was a bit worried once I’d put it together that the legs looked really small. I know babies are pretty small, but I thought they have pretty chubby legs!

But I needn’t have worried, it fits fine: 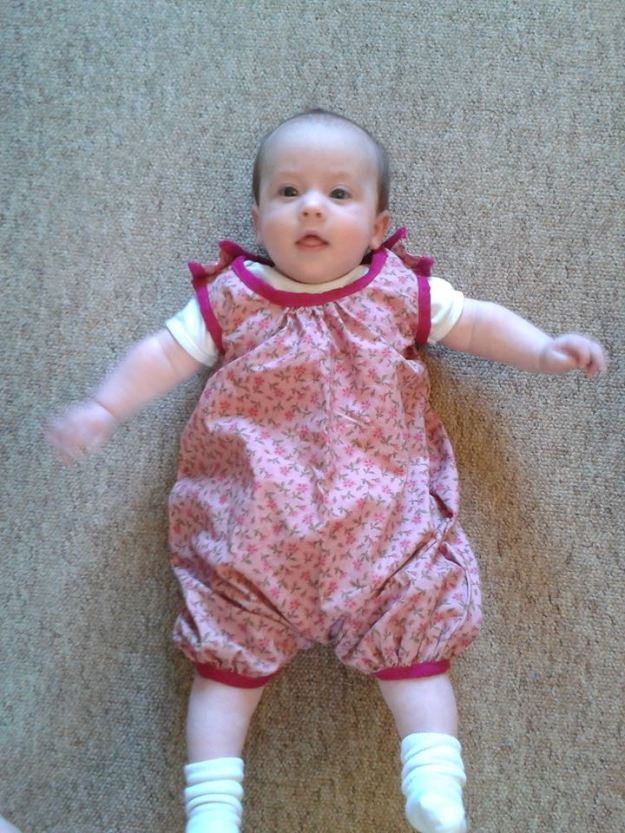 How cute is she?!?! I know I’m biased, but come on! Phoebe says she reminds her of me – we’re twins, so I think what that means is she looks really like Phoebe and therefore quite like me. But Phoebe is more used to seeing my face, so she sees me instead of herself, if that makes sense?

She wore this to a birthday party and apparently got lots of compliments (sooo proud!) and then puked down herself, thus christening it properly!

After the disaster of using poppers instead of proper snaps on my nephew’s dungarees, I learnt my lesson and used proper snaps here, so hopefully they’ll stay done up for more than 8 seconds!

I used buttons from my stash for all 3 outfits. The ones for the romper were little pink ones my friend gave me from her huge tin of buttons (the colour looks really weird in this picture!):

You can also see that the inside of the straps isn’t super neat – this is the bit where I was totally confused, so I maybe should have done something differently that left this bits neater and not with a raw edge on the inside.

I also made 2 of the dress/shorts combos. I used the fabrics in different ways on both, and I’m pretty pleased with how they both turned out!

I made one in blue and pink – all the fabric came from Phoebe:

The buttons on both dresses are from the high-necked tops I refashioned ages ago – I’m glad I kept the buttons for so long! 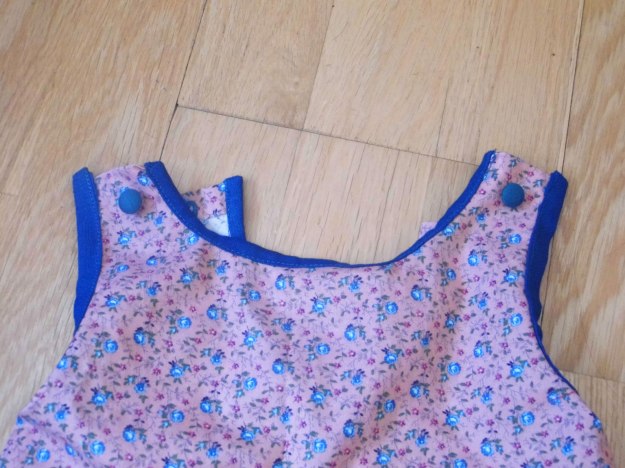 And I made one in red and blue, but more red, so this is ‘the red one – this fabric was from my stash (the red was a pillow case and the blue was a fat quarter from my friend, in the same batch as the stuff I used for 2 Grainline Scout Tees)’: 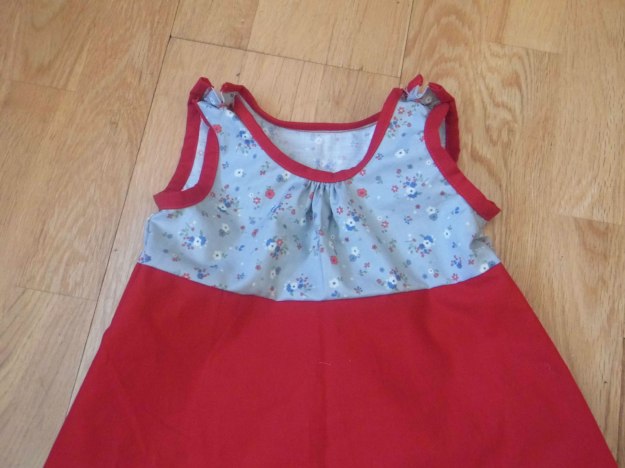 I like the contrast binding on the shorts – I like how they look tucked under the dress so the fabric on the top of the dress and bottom of the shorts matches! 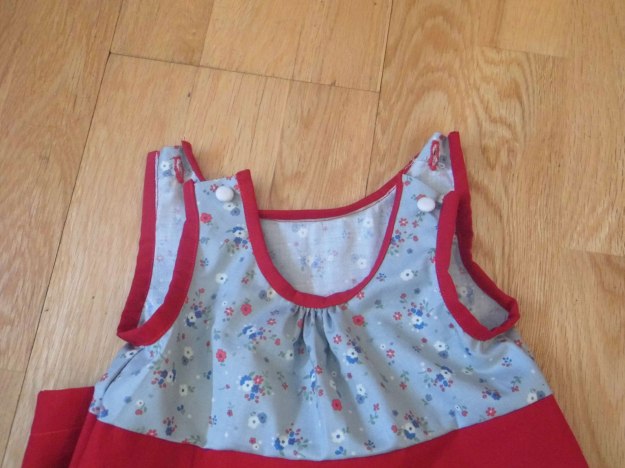 As you may spot if you’re eagle-eyed, I didn’t put the elastic into the shorts. Phoebe did tell me Alice’s waist measurement, but I didn’t know how tight to pull the elastic – I didn’t want them to fall off or pinch her round the middle. So I left a gap in each pair of shorts and posted the elastic with the clothes, for Phoebe to measure the elastic based on some of her other clothes. This might have been really annoying – sorry if it was, Phoebe – but it seemed like the best way to not ruin them at the last stage!

I kind of enjoyed making these, once I’d deciphered the instructions. I liked planning which variations to make and with what fabric. There was some really nice purple fabric, that matched a fat quarter I had in my stash, but however I tried, I couldn’t make any of the variations out of them, which was a bit sad. But 3 is okay for now. And I can make the little dress out of something thicker, like corduroy, for a Winter pinafore. The sizes go up to 12 months, so I’ve got plenty of time to make some more.

I might try a different pattern, though, so get some more variety – do you have any suggestions of good children’s patterns? With easy to follow instructions!