Earlier this year I heard about the Secret Valentine’s Exchange organised by Sanae Ishida and Ute and decided to join in because it sounded fun to make a present for a stranger. Of course once I received my name (Sarah of Northfield Primitives) I was terrified that I would make something that she didn’t like. Everyone who signed up had to fill in a questionnaire of tastes, favourite colours and things, and social media handles and online presence to do a bit of good old-fashioned online stalking! One of the ideas is to use things mostly from your stash too, so I dug through my stash to find fabrics I thought she would like.

Sara listed her favourite colours as blue, mustard yellow, earthy browns and reds, and said she likes old and vintage fabrics, bits of old patchwork and lace. Luckily her colour palette is similar to the colours I like. Since she said she liked patchwork, I thought I’d make a patchwork/quilted cushion cover. I sketched some ideas, working on 6×6 squares, halved into triangles.

I settled on the version on the left and coloured it in to work out which fabrics would go where.

Half the fabrics needed 4 triangles and half needed 8, to make it symmetrical. I then made a key of which fabric matched with which colour on my picture. The corner of the paper is missing because this was my pattern piece for the triangles. I drew a 6cm x 6cm square, then drew a diagonal line down the middle. I then added 1cm to each edge for seam allowance. The total size (36cm x 36cm) was based on a cushion pad I already had in my stash.

I then sewed the triangles into squares. Because it’s symmetrical in all 4 corners, there weren’t that many different combinations in the squares. 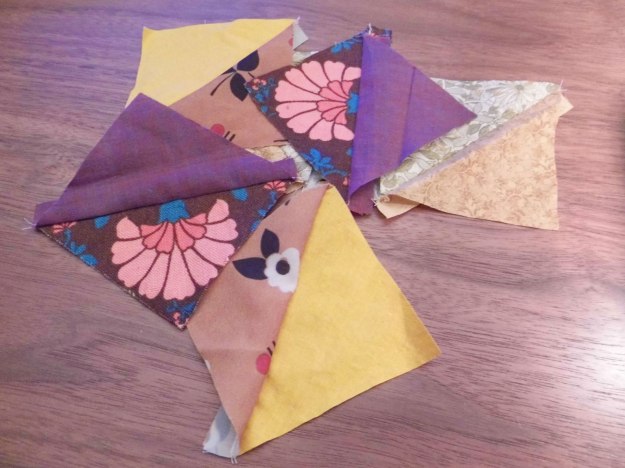 I then sewed the squared into strips, making sure each square was facing the right way according to my plan. This hurt my brain a little at various points! Having all the strips made meant I could lay it out to look what it was going to look like. At this point I wasn’t sure it was going to work as I felt some of the fabrics didn’t look great together.

As with so many of my non-clothes makes, I used calico for the back of the cushion and also as the backing for the patchwork/quilting bit. I bought some wadding from my local shop (which was the only thing I bought for this make) and sandwiched 2 layers between the calico (which I had cut down to 38cm x 38cm (with 1cm seam allowance) and the patchwork. I kind of made up the stitching lines and used white thread as I couldn’t decide what other colour would go with so many different colours of fabric. In the end the stitching was pretty much all in the seam lines so it wasn’t too obvious on the front.

Here is the quilting pattern I used (from the back of the front of the cushion):

And here’s the finished cushion! 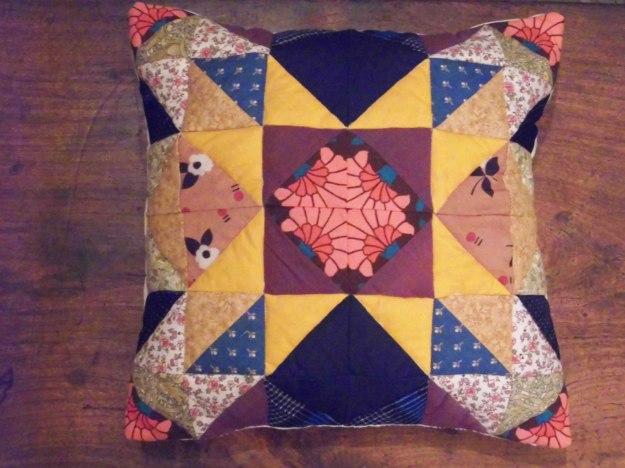 I didn’t use a zip or anything, I just left a gap to get the pad in and hand stitched it closed. I wonder if I could have added another one or 2 layers of wadding to make the cushion more puffy, but it looks okay. I sent a little package of some fat quarters and other bits and pieces which I thought Sarah would like. I was definitely relieved when she said she liked it!

Did you join in with the Secret Valentine’s Exchange? Or another secret gift exchange? Did you find it nerve-wracking to make something for someone you don’t know?!

So when The Boyfriend and I moved into our current flat in Cirencester, we bought a load of furniture as we’d always lived in furnished flats in London. We did a big Ikea order of a bed, some kalax shelves (which seem to be the only thing in which to store sewing supplies!) and some bedding. Luckily The Boyfriend shares my love of yellow so we bought some cute yellow and white striped bedding. Less luckily, it seems there is a difference between UK and European bedding sizes and the quilt cover looked like this:

As you can see, the quilt cover is way too small. I think we have a standard double quilt, but I guess the European double is smaller? Luckily we also ordered (totally by accident) a single fitted sheet, so I decided to use this to add strips to the sides of the cover to make it fit over our quilt. It would have been better if this had been a flat sheet, though, because I had to unpick the elastic from the edges and then the sheet isn’t a full rectangle.

Having laid the Ikea cover on top of the quilt, I measured (flat) that I needed an extra 65cm on each side to make it fit our quilt – it was 151cm wide but needed to be 216cm wide. The reason it needed to be 65cm on each side was because it needed to be that much bigger on the bottom and the top, so I had to add twice as much fabric as I originally thought. I also made sure to add a 1.5cm seam allowance. Because I was using an unpicked fitted sheet, I had to piece the strip on one side: 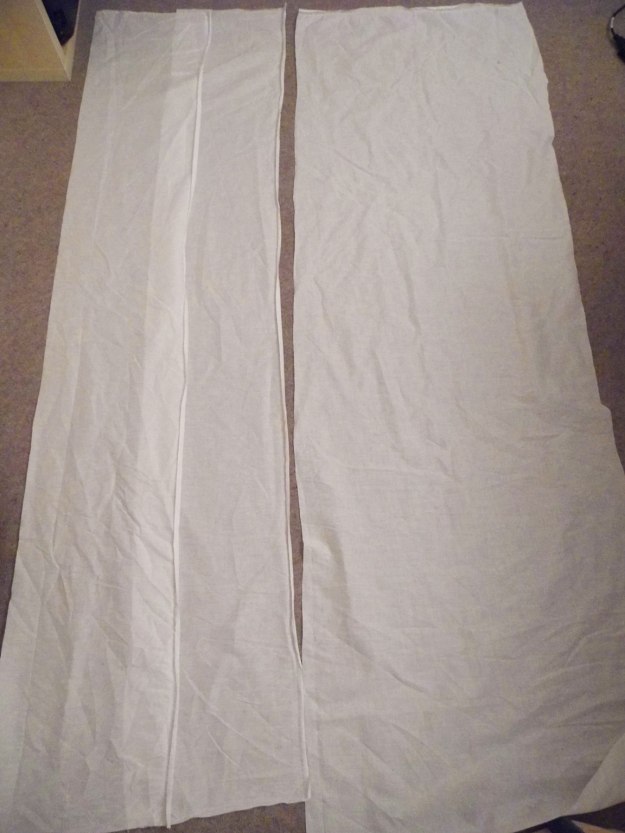 You could choose to piece it if you wanted anyway, to get a side seam still on each side – I have a side seam on one side but not on the other, so it probably looks a bit funny, but I didn’t have quite enough width to be able to make a seam on both sides. So in the above photo, the one on the left is the side that ended up with the seam (obvs!) but it was also a bit shorter because fitted sheets are like a cross on each end, so the middle is longer than the sides – the whole side on the right is the middle and the 2 pieces on the left are the 2 sides of the sheet. If that makes any sense at all! It didn’t matter in the end that one strip was shorter as they both ended up too long, but I left them a bit on the long side so I’d be able to neaten the ends and would have some fabric to play with while I worked it out. 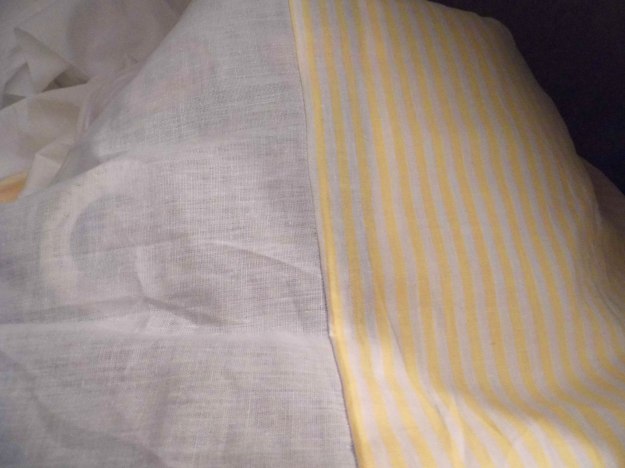 I ended up not taking too many useful photos, so I hope my written instructions vaguely make sense. It was fairly easy to figure it out as I went along, so hopefully if you do end up having made the same ordering mistake as me, you can increase the size with the help of a sheet. I felt it was easiest to add strips to the edges so I didn’t have to alter the buttons at the bottom – it has ended up with a narrow opening compared with the new width of the quilt cover, but we can stuff the quilt in so that’s good enough for me! It definitely makes our bedroom look a lot brighter! 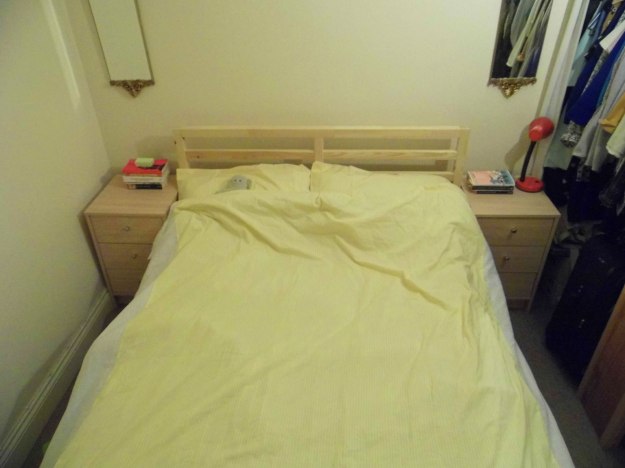 I want to make some kind of something to go above the bed on the wall because there’s just a big empty space at the moment. I’m thinking of a big weaving, like they’ve made on A Beautiful Mess, but with more colour! The Boyfriend also quite wants to paint our bed frame and bedside cabinets, but I’m not convinced as I don’t really like painted furniture, but I see his point that it’s all a bit bland and beige! Any thoughts?