One of my favourite dresses I’ve made is this electric blue one, from a free pattern by In The Folds for Peppermint Magazine. I always get compliments whenever I wear it, and I love the slouchy shape, though it still makes me feel put together.

I love buying new patterns, and each time someone releases a shiny new one (Closet Case Patterns Sasha Trousers, I’m looking at you!) I find it really hard to resist buying them. I have so many patterns I’ve not yet made so often I make things once and think ‘I really like this, I’ll make it again’…..and then I don’t. So I’m trying to remedy this by making more versions of things I’ve liked making and wearing but have made only once or twice. This is the first of those patterns. 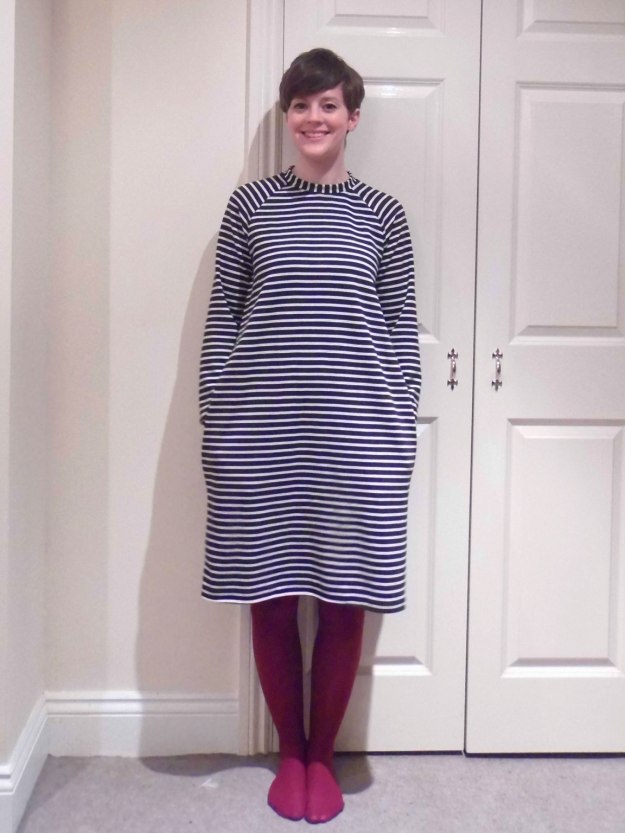 I made the size 10, as before, and the only change I made was to cut off the pockets (which are attached to the front and back pieces) and cut them out separately as I couldn’t quite fit the pieces as they were on the fabric. Speaking of which, this fabric was the one piece I managed to snag when What Katie Sews did an Instagram destash a few months ago. I could cheerfully have bought loads of things, but I was mostly too late, boo! But I did get this great stripey jersey. It’s nice and thick but still has a bit of drape so the dress hangs really nicely. 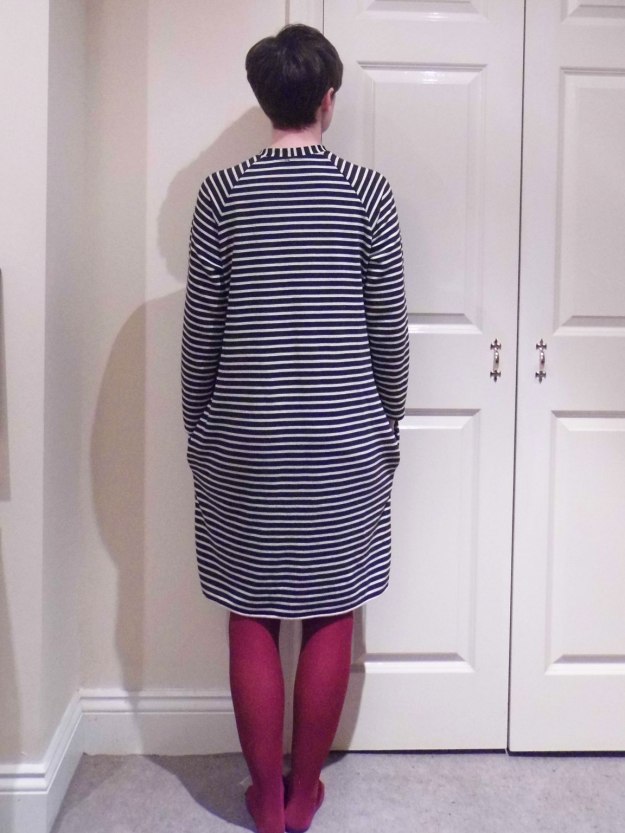 I was telling my friends at the Sewing Bee Live that I’m not totally convinced about raglan sleeves on me, but looking at these pictures, I don’t know what my problem is! I have a hang-up that my shoulders are wide, but given that that is often the place where things are too big on me, I think I might be a little bit mental! Since making this dress I’ve cut out another Linden sweatshirt, to give it another go as I wasn’t totally in love with my first version – but that may have been due to the fabric more than anything else.

I cut the neckband with the stripes going the other way, not realising that the fabric only stretches one way. So I can barely get it over my head! I think I might remove the neckband completely and just turn the neck under as that is the one place on my other version that isn’t totally comfortable – it’s a bit strangle-y when I’m sitting down. 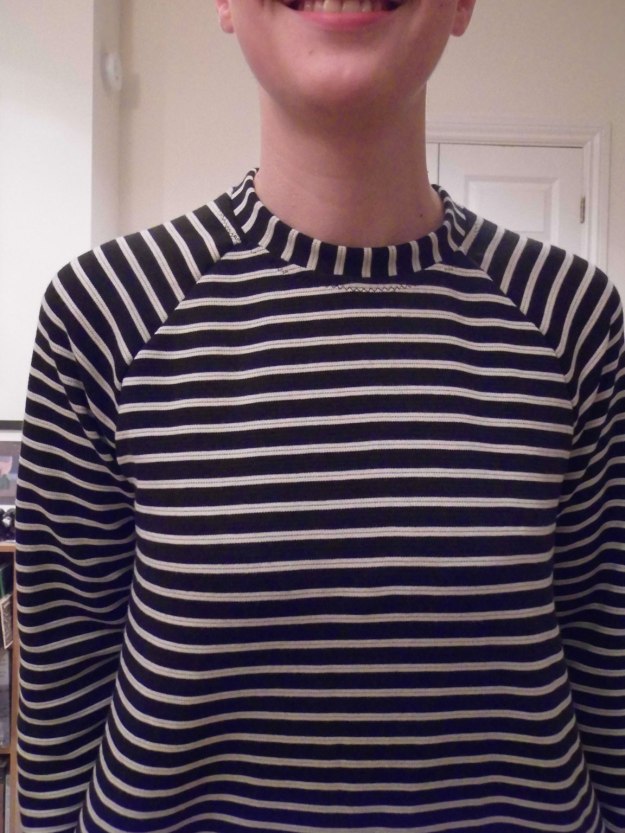 I didn’t add the cuffs, which I had done on my other version, so I just turned a small hem up on each sleeve end. I also left off the hem band this time as I felt it made it slightly long on the other version. I also couldn’t squeeze it out of the fabric, and I’m glad I left it off as I like the more a-line shape of the skirt when it’s not pulled in by a hem band.

I did have enough fabric to pattern match the stripes on the side seams, but the eagle-eyed among you may spot – if you look at the hem – that the hem is not straight when you compare it to the stripes. This is because I wasn’t as careful as I could/should have been when folding the fabric in half to cut out the front and back. It looked like the stripes were lined up, but they were one out so the stripes have actually formed a spiral around the dress, so it’s impossible to hem it with the stripes straight – I tried and I reached my starting point but was still pinning more and more out of the hem as the spiral moved up the dress! Oops! Lesson learnt.

And today’s outtake it brought to you by not making it back to my photo spot in time for the camera timer!

Do you make patterns more than once or are you seduced by shiny new ones, like me. Or a combination of the two? I think that’s what I’m hoping I’ll aim for as I don’t want to stop supporting all the wonderful indie designers, but also I don’t have unlimited money and time for buying and making new patterns constantly.

I made a cropped Inari Tee! I haven’t actually worn it yet as it feels a little breezy around the midriff and it’s been pretty cold recently in Cirencester. I do really like the proportions and the shape of this top, though – that’s one of the things that made me want to make it, seeing everyone else’s great makes.

I made the size 8 with no changes as this was kind of a wearable toile – I used leftover fabric from my Marianne dress so if it had been a disaster I had only used some leftovers! I did the same thing as on the Marianne dress by using the stripes the other way around on the neckline, and I still like how it looks! 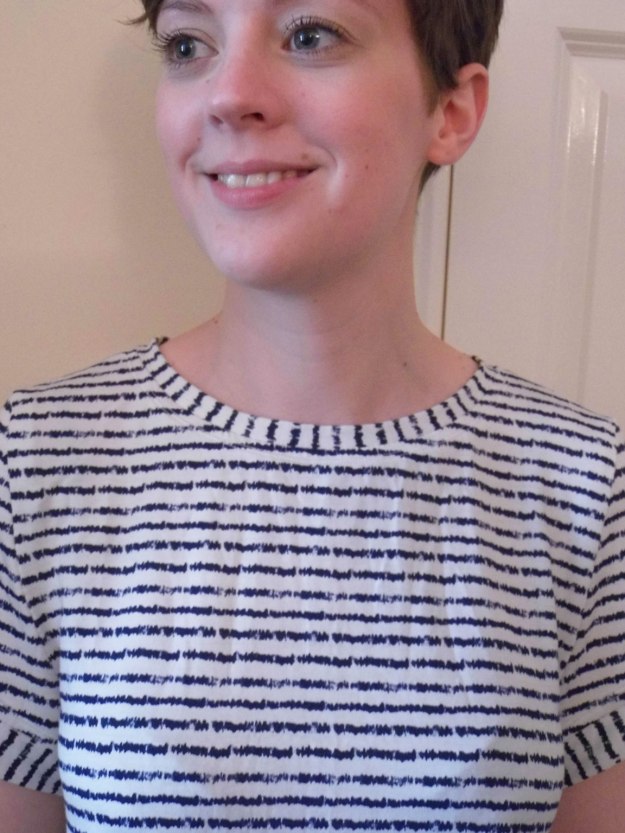 I also love the cuffs, which I also did with the stripes going the other way. As I mentioned in my post about taking in a raglan tee, I’m really liking cuffs on short sleeves at the moment. It’s definitely one of my favourite things about my new melilot shirt, too.

Although I quite like the proportions of the top, which I’m wearing here with some high waisted trousers (which I altered last year), I think on my next version – yes, I’m already planning another version – I might lengthen it by an inch, just so I feel a bit more comfortable. If I put my arms up at all, there is a lot of skin on show – and if I put my arms really high, you can basically see my bra! I guess this is not a top to wear on days when I have to reach for anything in public! I might also level off the hem as I don’t really love how it’s higher at the front for some reason.

I wonder if I should maybe take it in a bit at the shoulders with the next version? In a less drapey fabric, it might not sit as nicely – I can see a little bit of pooling in the upper bust area, which might look worse in the fabric I’ve got planned, which is a little more structured than this jersey, though still quite drapey. What do you think? Is it worth making lots of changes to a fairly simple t-shirt?

This is definitely one of my favourite makes I’ve made in a while, and certainly one that fits me the best straight out of the packet. As I’m sure you know, I am lazy when it comes to fitting things, and I treated this as a sort of wearable toile – I basically always do that but then I never make any fit changes to the second version!  But this fits me really well, and I like how it falls.

I made the size b and used some leftover fabric I’ve had for several years after making my first Banksia top out of it. It was from Goldhawk Road, probably one of the first times I went, if not the first time I went. It’s just a cotton, but it’s really soft. I thought I wasn’t going to have enough fabric, but given that this pattern was made for the stripes to go different ways,  I managed to do some expert tetrissing (I know this isn’t a word, but it should be: v the act of squeezing a sewing pattern out of a tiny amount of fabric) and just squeezed it out. I did the version with the facing, which is in some cheap white polycotton I had in my stash. The only change I made to the pattern/instructions was to stitch the facing down to the side seams – I did this as top stitching right in the ditch of the seam line.

If you follow me on Instagram, you will have seen that when I was overlocking a seam on this top, I was pulling it through to get a long enough tail to cut and stopped paying attention for a second, which led to me accidentally cutting part of one of the back shoulder pieces. Luckily I cut it along the same direction as the stripes and so I put an odd piece of white fabric behind it and zig-zagged it a few times to secure it. And now you can’t really see it – I think unless I pointed it out, you wouldn’t know it was there! It must be visible in the below photo, but I can’t see it, hurrah!

I wanted a close up of the stripes all going different ways, so here you go!

I think I might be pretty bad at gathering all the supplies I might need for a certain project – I always think about the fabric and, say, a zip for a dress or buttons for a shirt, but I rarely actually check the list of notions needed for a pattern, so when I got to the hemming stage of this make, that was the first time I realised I needed bias binding. I could have maybe done without, but luckily I had this baby pink stuff in my stash – it was literally the only bias binding I had and luckily it sort of matches! I think I might do bias hems more often as I like how it looks and it’s pretty easy!

I feel that with more of these makes I share, the less I have to say about them. I’ve got a few more of these kinds of quick projects, but I do have some ideas about some more involved projects, so then hopefully I would have a bit more to talk about!  Jeans are definitely in this category and I want to make a coat (it’s one of my #2017MakeNine after all) and a bag, so they should keep me a bit busier.

I have already bought some more fabric to make another version of this, but given I’ve only managed to wear this one about twice because the weather has gone totally to pot in the last couple of weeks, I’m not sure how much wear I would get out of it. *sobs* I’m wondering about layering them over long-sleeved basic tops when it’s cold, though. What do you think? Would that look terrible? I feel like a white top with this one would look okay?