If you follow me on Instagram you may have gleaned that in January I restarted playing the trumpet/ cornet and joined a brass band (Cirencester Band in case you’re interested) and a swing band (JJ’s Swing Band). I also invested in a full set of mutes, which I never used when I played at school, but which are really needed in the swing band and are used in quite a few of the brass band pieces. I spent about £150 on 4 mutes (Harmon, Straight, Cup and Practice in case you’re interested) and when I started carrying them around I worried that they would get scratched and dented by bouncing off each other, so I decided to make some little draw-string bags to keep them protected.

Working out the dimensions for the circle at the bottom of the bag and the rectangle for the sides took quite a bit of maths – maths which I hadn’t used since GCSE!   Πr² and all that.

I added a 1cm seam allowance and then used the circle formulae (c = Πr² and r = (c÷2Π) to figure out the final measurements I needed. In retrospect I should have added more to the height of the side to allow for the drawstring and the bunching of the fabric, so if you use this tutorial, I would all a couple of centimetres to the height of whatever it is you want to put in a bag.

I used several things which were in my stash: leftover mustard denim from one of my cleo dresses, the scribble striped jersey (which I used to make my Marianne Dress and my cropped Inari tee) and some thick mystery fabric my friend gave me after making me a knitting needle case. The letters are made from a tiny bit of navy twill I had lying around.

The first thing I did was to stitch on the letters, using a narrow zig-zag stitch to stop them from fraying. I sewed the letters onto only the denim, so the stitching wouldn’t show on the inside. 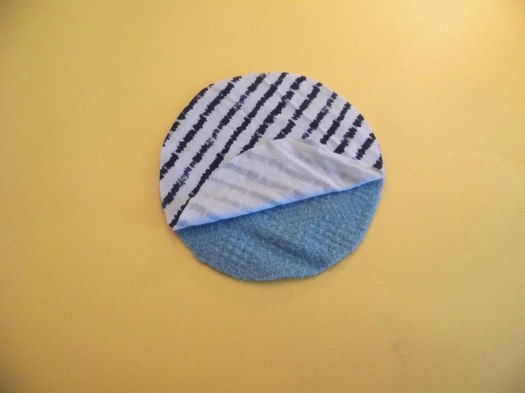 The next thing I did was to sew the lining fabric (the stripey jersey) and the padding layers (the turquoise mystery fabric) together for each bag base and side, so I could treat them as one layer when stitching them together. 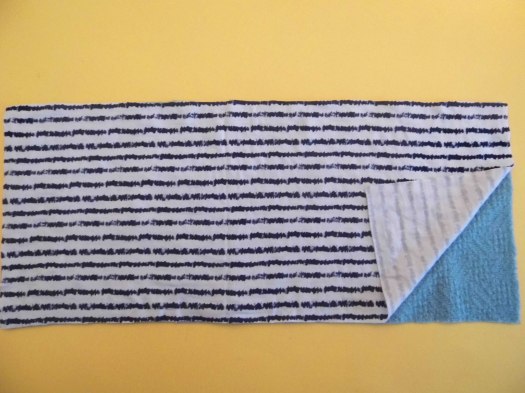 I then stitched the side rectangles into tubes, right sides together. I did this for the doubled up lining layer and the outer denim layer. 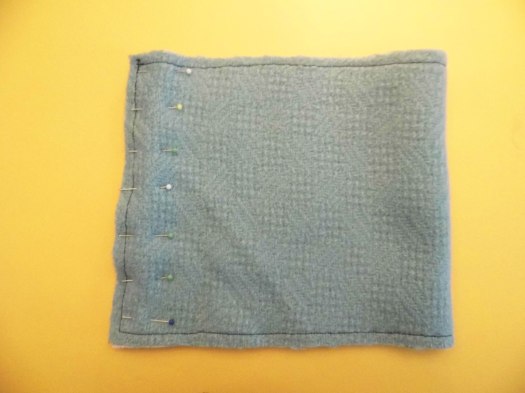 The next thing was to stitch the tube to the base of the bag – I’m not going to lie, this was really fiddley with the denim because it has no stretch at all. I marked the quarter points on the circle and the tube to help distribute the tube evenly around the circle.

At least I knew my maths worked! 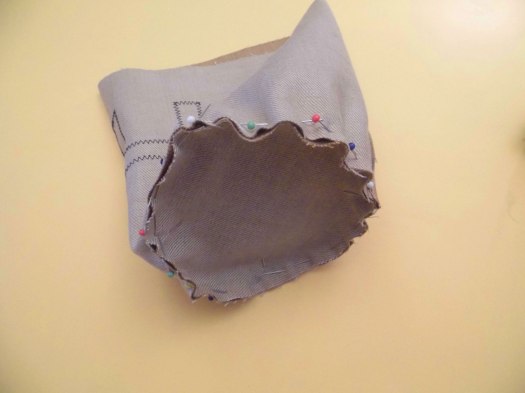 I repeated the step with the lining pieces – it was way easier because the jersey obviously has stretch and the turquoise mystery fabric has enough stretch to help ease the 2 pieces together. 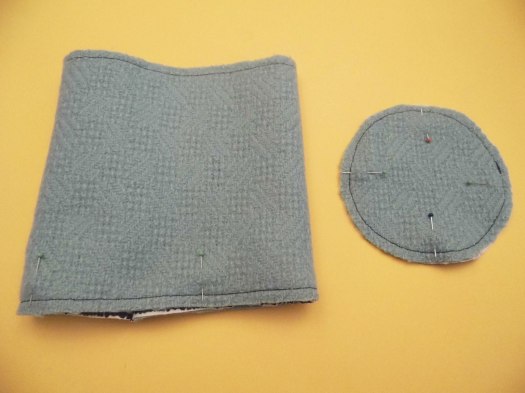 I trimmed the seam allowance down on the lining pieces because it was really bulky with the padding layer. 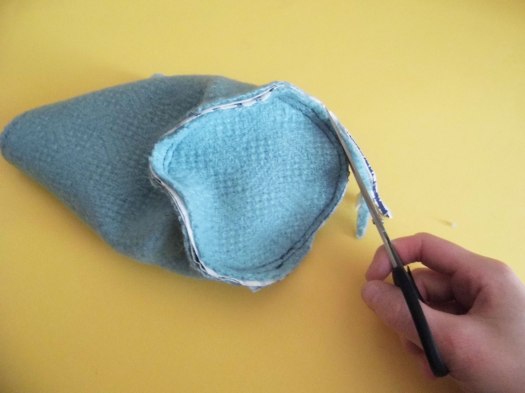 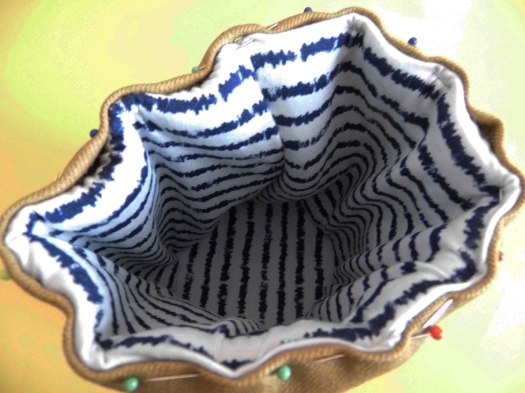 I topstitched the 2 layers together a few millimetres from the top of the bag, and then did another line of stitching at a 1.5cm seam allowance to make a channel for the drawstring, which I bought from my local sewing shop. 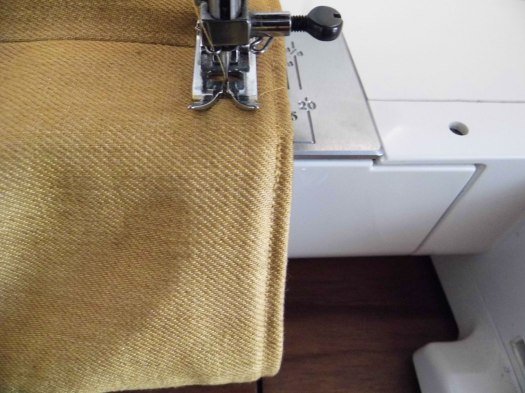 I had to unpick just the lining between the 2 layers of stitching to allow me to get the string into the channel – because the side seam has been sewn over twice, I figured it wouldn’t unravel completely. 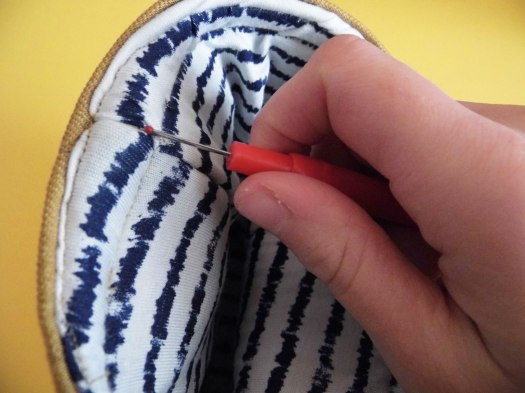 And here they are! I’m pretty pleased with how they turned out – they do make my mutes a lot more bulky to carry but I’m not constantly afraid of destroying them, especially given that they were fairly expensive.

This is the harmon (or wah-wah) mute, which is used for jazz mostly. It has a plunger in the middle, which you can adjust or remove – if you remove the plunger you get a sound like Miles Davis.

This is my cup mute, which muffles the sound more than the straight mute 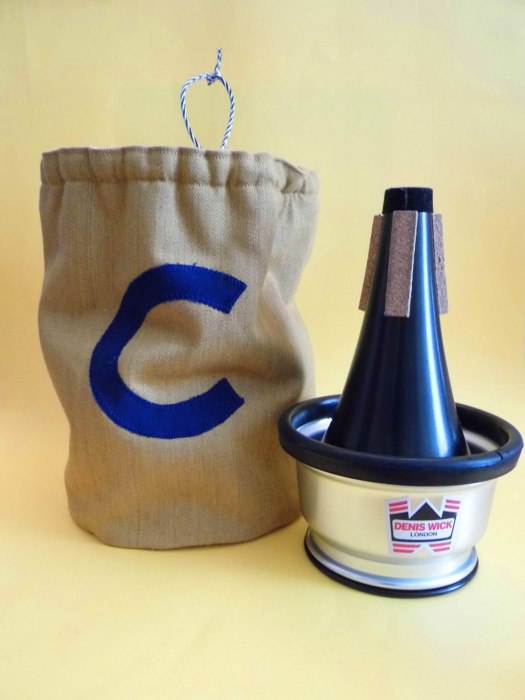 The straight mute muffles the sound but it has a pretty sharp sound.

This is my practice mute, which completely deadens the sound, so I can practice without making my neighbours hate me!

Do you play any musical instruments? Will you make these draw-string bags for storing other things?

This might legit be my favourite thing I’ve ever made! I know I’ve said that before but this time it’s true! This is my sequinned bomber jacket!!!! The fabric was from @fabricgodmother a while ago and Im glad I waited for the perfect project. #mccalls7100 #m7100 #sequinedbomberjacket #sequins #sequinedbomber #sewingblogger #linkinbio #isewclothes #homemadefashion #sewfrosting
What’s this? I sewed something! And blogged about it! Miracles do happen 😂 This is one of 2 @helens__closet Elliot sweaters I made and it’s safe to say it’s true love! More pics on the blog. Fabric I think was from @material_girl_laura. #elliotsweater #elliottop #sewingblogger #linkinbio #sewingwithknits #isewclothes
It’s looking like a double welt pocket!! Exciting! #ninaleepatterns #richmondblazer #doubleweltpocket #tailoring #imakeclothes #jacket #blazer
Sneaky peek of something I’m super excited to finish and wear! My first time doing bias bound seams-not my neatest work but it’s doing the job! #bomberjacket #boundseams #biasboundseams #isew #sewingblogger #isewclothes